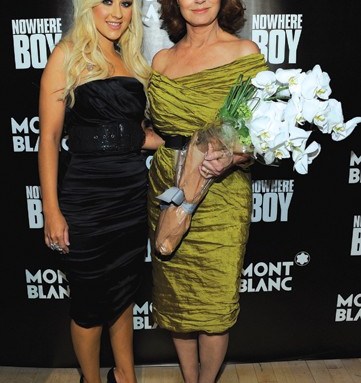 PAPERBACK WRITER: Montblanc celebrated the launch of its John Lennon-edition writing instruments with an expansive blowout at Jazz at Lincoln Center on Sunday night. Susan Sarandon hosted the evening and Christina Aguilera sang a rendition of Lennon’s “Imagine” — with Linda Perry on piano — for attendees who included Harvey Weinstein, Helena Christensen, Emily Mortimer, Josh Groban, Gabrielle Union, Alan Cumming, Estelle and Sam Taylor-Wood. The Richemont-owned brand hosted similar events in Tokyo, Hong Kong, Mexico City and Berlin the same evening, with the latter connected to the New York soiree by a live video feed. Lennon’s widow, Yoko Ono, addressed the crowd from Berlin — where the six-hour time difference meant the Germans were slightly soused. “I am delighted that John is being recognized with these beautiful and unique writing instruments,” she noted. “He was a creative force who loved drawings and writings and the power of words and art, so I know this would mean a lot to him.” Part of the proceeds from the $920 fountain pen will go toward various children’s music-education programs.

MRS. ROGERS’ NEIGHBORHOOD: Marchesa will be the official fashion sponsor for the annual Suzanne Rogers Presents event in Canada. Suzanne Rogers will be at The Darby Wednesday night, when Marchesa’s Georgina Chapman and Keren Craig officially announce their support. The Canadian shindig is slated for April 5 at The Carlu in Toronto and will benefit The Herbie Fund.

WIDE-OPEN SPACES: The unlikely triumvirate of Mark Ruffalo, Debra Winger and Arliss Howard will be on hand Sept. 23 to launch Farmhearts, a group dedicated to preserving farms and open land, at the Upper West Side Pure Yoga. Equinox Fitness Clubs, a 49-club operation that owns the yoga brand, has its own new addition. Cynthia “Cie” Nicholson has joined the company as executive vice president and chief marketing officer. Most recently chief merchandising officer at Pepsi, where she oversaw 35 brands, Nicholson is intent on transforming Equinox into a global lifestyle brand.

FASHION HOT SPOT: Despite Lincoln Center, the fashion crowd still likes to frequent Midtown. Case in point: the just-opened Lambs Club at The Chatwal hotel, which is near Bryant Park and has become one of this season’s popular postshow hangouts. On Fashion’s Night Out, models Alessandra Ambrosio and Renata Maciel hosted a dinner there, and Tara Subkoff is celebrating her return to fashion week in the restaurant tonight while Yigal Azrouël will host his postshow party at the bar. Naeem Khan is planning his fashion week dinner party there on Thursday while L’Wren Scott will be stationed at the bar to toast her new collection.

The Lambs Club, the restaurant at The Chatwal, is a partnership between chef Geoffrey Zakarian, David Rabin, Will Regan, Jeffrey Jah and Margaret Zakarian. They made sure fashion types feel right at home: Cushnie et Ochs designers Carly Cushnie and Michelle Ochs created uniforms for the waitresses and hostesses at the restaurant.

BAUBLES AND BANGLES: Louis Vuitton is marking its debut at Paris’ Biennale des Antiquaires with a display of its L’Ame du Voyage collection, designed by Lorenz Bäumer. The haute joaillerie line consists of 80 pieces, inspired by various florals, dance, rock ’n’ roll and the designer’s travel from Cambodia to Paris. “I closed my eyes and asked myself where I would like to be at this very instant, and then images came into my mind,” Bäumer said. The 25th edition of the Biennale des Antiquaires is being held at the Grand Palais from today to Sept. 22, and features seven fine jewelers including Van Cleef & Arpels, Harry Winston, Dior Joaillerie, Piaget and Chanel Joaillerie.

Speaking of Vuitton, here’s a rare problem in today’s still turbulent retail scene: too much business. Word has it Louis Vuitton is shutting its Paris boutiques one hour earlier — with the exception of shop-in-shops in department stores — through November to avoid the risk of depleted stocks. The tourist trade is brisk in the French capital, and Vuitton is constructing a 12th leather goods factory in France to cope with strong worldwide demand. Shares in Vuitton’s parent, LVMH Moët Hennessy Louis Vuitton, recently surpassed the 100 euro mark in trading on the Paris Bourse.

A FETE FOR FARHI: The ever-discreet Nicole Farhi was awarded a Légion d’honneur in July — and has only just begun to talk about it publicly. The designer received her medal from Gerard Errera, the former French ambassador to Britain, at her home in the south of France, surrounded by family and friends. She admitted, however, that she ran into some sartorial difficulty on the day: She was wearing trousers and a white shirt that was too flimsy to support the heavy medal. “Gerard kept asking me if I had a jacket — but I told him I hadn’t packed one because it’s so hot in the South of France during the summer,” she said with a laugh. “We ended up putting a piece of cardboard behind the pocket on the blouse to keep the medal in place.” Farhi said she was informed about the honor back in January, but had kept mum because “sometimes it takes a year or two before you actually have it in your hand. I am…moved by it,” she said. She plans to celebrate with a small dinner during London Fashion Week.


NORMAN ON TIME: Golfer Greg Norman is on a roll. Shortly after inking a deal to do an exclusive men’s golf line for Macy’s, he signed on to be an ambassador for Omega watches. He joins fellow golfers Sergio García and Michelle Wie, swimmer Michael Phelps, actress Nicole Kidman, model Cindy Crawford and astronaut Buzz Aldrin. “We all know that Greg Norman is a golfing legend. Furthermore, he is one of the game’s great personalities and is enormously popular both on and off the course. We are very much looking forward to this partnership,” said Omega president Stephen Urquhart.

CHAIR MAN: Multitasking French designer Alexis Mabille has turned his talents to sprucing up furniture. Two 18th-century neoclassical chairs sporting upholstery designed by Mabille (think fancy bows and couture embellishments) will feature in the Tremplin (Springboard) section of the upcoming Biennale des Antiquaires fair in Paris this month, geared to promote the future talents of the Biennale. Art historian and antiques dealer Christophe de Quénetain approached Mabille to work on the project. The event will run Sept. 15 to 22 at the Grand Palais.