French actress Emmanuelle Seigner, who appears in this winter's Celine campaign, has a new project with the LVMH-owned brand. 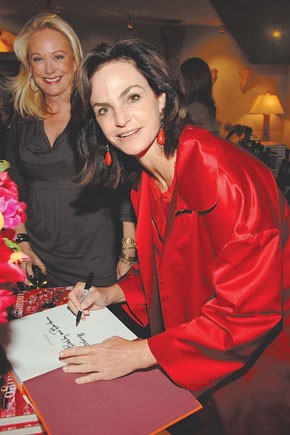 PICK A PARTNER: French actress Emmanuelle Seigner, who appears in this winter’s Celine campaign, has a new project with the LVMH-owned brand. She’s teamed up with Celine designer Ivana Omazic to design a range of chill-out clothes based on tai chi, a mild martial art both women enjoy. The line is expected in Celine stores next April. Meanwhile, Bruce Weber has been tapped again for Celine’s forthcoming spring ads, this time starring model Karen Elson and Danish ballet star Nikolai Hubbe.

HILL COUNTRY: Sandy Hill’s new book on entertaining “Fandango” promises “recipes, parties and license to make magic,” but the cocktail party held in her honor at Nina Griscom’s store Thursday night was more of a low-key, neighborhood affair. Of course, the “neighbors,” in this case, were Anne Bass, Carolyne Roehm, Marjorie Gubelmann and CeCe Cord. Waiters passed out glasses of white wine, Diet Coke and water as guests navigated the boutique, examining the various home curiosities Griscom has for sale. “Is that a baboon’s butt?” queried Tim Schifter of an enormous nut on display, before jetting off to dinner downtown at Liv Tyler’s home.

Carmen Dell’Orefice made an even speedier appearance, popping in for a quick air kiss with a cup of ice cream in hand. “I don’t think that was from Tasti D-Lite,” quipped Griscom.

Meanwhile, Hill was hard at work, inscribing copy after copy with barely a break. She better get used to it: Shirin von Wulffen and Martha Stewart are throwing her another fete on Nov. 19.

BRIAN’S SONG: Brian Atwood’s first collection as creative director of Bally was toasted Tuesday night at the Swiss leather goods company’s Beverly Hills store. A portion of the proceeds from the event, hosted by Vogue, went to the Environmental Media Agency. “The EMA believes we can change the world through shopping,” chimed Patty Maloney, the organization’s vice president. The crowd, which included Joy Bryant, Rachel Zoe and Brittany Murphy, was happy to oblige. “I’m already seeing about four things that I love,” Bryant cooed, singling out a pair of brown slouchy boots in particular.

SEW WHAT: Alexis Mabille’s recent display of fancy frocks at the Palais Royale in Paris was a sign of bigger things to come. The Chambre Syndicale has elected the dandy designer as one of the new guest members on the couture schedule for January, along with Josep Font and Stéphane Rolland. “I felt ready to tackle my first fashion show,” said Mabille, adding that his unisex couture pieces and accessories will still carry a fun streak.

This story first appeared in the November 5, 2007 issue of WWD. Subscribe Today.

TEMPORARY TREASURES: FrostFrench, the London label designed and founded by Sadie Frost and Jemima French, is going the guerrilla retail route. Following the opening of the brand’s first stand-alone store in London’s Islington last month, the duo will open two pop-up shops in the city Nov. 10. One 300-square-foot boutique will be in Mayfair’s Burlington Arcade, just off Piccadilly, while the other, a 500-square-foot space, will be on Fouberts Place, a row of trendy shops behind Carnaby Street. Sharon O’Connor, managing director of FrostFrench, said the pop-up shops would be open until at least February of next year, and added that the brand was also set to open a second permanent store in central London in March.