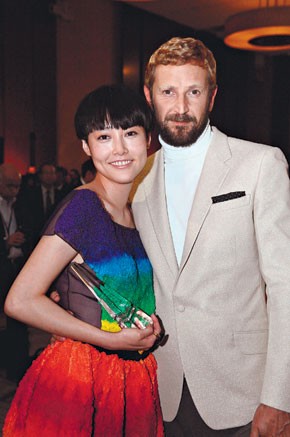 PURPLE HAZE: Colette in Paris was seeing purple Tuesday night for the launch of Purple magazine’s first “Purple Anthology.” “I actually once did an internship at Purple, but it was more about art then,” mused Colette’s Sarah Lerfel surveying the night’s edgy crowd, including Victoire de Castellane, APC’s Jean Touitou, a tattooed Omahyra Mota, and Irina Lazareanu, who turned up in a pair of stapled Viktor & Rolf slacks. The musician-model said her album is due out in September, produced by Patti Smith and featuring some songs by Pete Doherty. “All we need to do is get Sean [Lennon] and Patti in the same town and make sure Pete’s not in prison and we can get rolling,” she joked, adding she favors wearing Balenciaga on stage. “But I find brands like Ann Demeulemeester and Martin Margiela also look fabulous on stage,” she said. Cigar-toking Purple editor Olivier Zahn, meanwhile, disclosed he’s busy working on the next Chanel Mobile Art magazine, this time for its New York stint. “I’m also going to be opening Purple’s first office there in September,” he said, as Le Baron’s André zipped by to spray some graffiti.

MORE ON THE CFDA: Monday night’s CFDA Fashion Awards are shaping up to feature quite a few celebrity presenters. This year, the Womenswear Designer of the Year award will be presented jointly by Victoria Beckham, Eva Mendes and Maggie Gyllenhaal, who will take the stage representing nominees Marc Jacobs, Francisco Costa for Calvin Klein Collection and Jack McCollough and Lazaro Hernandez for Proenza Schouler, respectively. Tina Fey and Amy Poehler will present the Accessory Designer of the Year award. Ralph Lauren, meanwhile, will give Mayor Michael R. Bloomberg the night’s Board of Directors’ Special Tribute and Calvin Klein will bestow Caroline Herrera with the Geoffrey Beene Lifetime Achievement Award. The year’s Swarovski awards will be presented by Mandy Moore. As reported, Fran Lebowitz will be the evening’s emcee.

DENIM EXPANSION: To broaden its horizons, Miss Sixty Group is said to have acquired storied accessories house Roberta di Camerino with the aim to bring it back to its glory days. Miss Sixty founder Wicky Hassan and chief executive Renato Rossi have already put a design team in place to move the iconic colored velvet bags forward.

HOUSE OF DEVI: New York-based accessories designer Devi Kroell will open her first Manhattan store. Kroell has secured a 4,000-square-foot space to house her oversize exotic skin satchels, crystal-studded ebony evening cases and avant-garde pumps at 717 Madison Avenue, neighboring Graff and J.Mendel. Roman and Williams architects who are responsible for the Royalton’s recent facelift are designing the two-story store. It is Kroell’s second boutique and is slated to open in the fall. The company opened a store in 2006 in East Hampton, N.Y. There are plans to have a total of five stores by 2010.

HEADING WEST: Alberta Ferretti is setting up shop in Los Angeles. The Italian fashion label, which is part of Aeffe SpA, is to open its first U.S. flagship at 8626 Melrose Avenue on the corner of Huntley Drive this fall. Designed by London-based Sybarite Architects, the 5,382-square-foot store will showcase Alberta Ferretti, Philosophy by Alberta Ferretti and Alberta Ferretti Girls clothing, shoes and accessories on magnetic hangers and shelves that can be repositioned freely on lacquered steel panels. The interior will also include lacquered petals and mannequins sprouting from a cement floor, which will be inlaid with stainless steel. The boxy white exterior will be framed in black stainless steel.

TOPS IN TOKYO: Yves Saint Laurent creative director Stefano Pilati, dapper in a beige jacket and embroidered slip-on shoes, walked the red carpet Tuesday night at the Tokyo Conrad Hotel to snag the prestigious Fashion Editors’ Club of Japan award for International Designer of the Year. The group also honored Limi Yamamoto, Yohji Yamamoto’s daughter and the creative mind behind the Limi Feu brand, as Japanese designer of the year. Shu Uemura, the celebrated makeup artist who died late last year, and actress Rinko Kikuchi also received honors at the bash. “I’m really honored, really touched,” Pilati said before heading to his honorary dinner with YSL chief Valerie Hermann. Pilati said he only makes it to Tokyo about once a year but wishes he could travel to Japan more often. “It’s a source of inspiration, especially for the quality of everything, from the food to the service to the people.”

CAPED CRUSADER: Roberto Cavalli hit London on a whirlwind this week, starting with a Sunday Times Style lecture that took place Tuesday night at the London College of Fashion, followed Wednesday night with an address at the Oxford Union, Oxford University’s debating society. And Cavalli began his British road trip by sounding a note of caution to London’s famously out-there design students. “London designers are crazy, there’s too much crazy crazy,” Cavalli, who was clad in a Roberto Cavalli at H&M jacket, told students at the London College of Fashion. “When I wanted inspiration I’d often come to London, but the problem with London is you don’t know how to make clothes.”

And after addressing the Oxford Union in the question-and-answer session — in which he follows in the fashionable footsteps of fellow designer Tom Ford and Anna Wintour — Cavalli is set to host a dinner at London’s Automat restaurant tonight to launch his wine, Cavalli Selection, in London.