The Hermes collection Jean Paul Gaultier presented on the runway for spring has been a bonanza for Carla Bruni-Sarkozy. 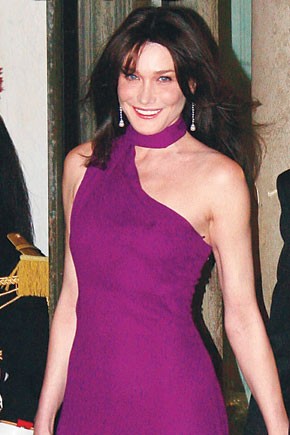 PURPLE REIGN: The Hermès collection Jean Paul Gaultier presented on the runway for spring has been a bonanza for Carla Bruni-Sarkozy. France’s new first lady chose a short white dress for her nuptials to President Nicolas Sarkozy last month, and a purple, one-shoulder gown for her first official dinner at the Elysée Palace earlier this week for Israeli President Shimon Peres, attended by the likes of Lanvin designer Alber Elbaz. It is understood that Bruni-Sarkozy bought both dresses herself at the Hermès boutique on the Avenue George V.

WINNER TAKES ALL: “Project Runway” winner Christian Siriano, who just got backers for his line on Monday, is on a West Coast whirlwind this week. The pocket-size designer, who said the W Hotel gifted him a bed to end his furniture-less existence, flew to Los Angeles with a rack of clothes, including the ruffled dress he created for Victoria Beckham in the show’s last episode. He greeted fans, including retailers Cameron Silver and Tracey Ross, at a dinner in his honor at the Roosevelt Hotel Wednesday night, and said he was meeting with Beckham on Thursday to fit her in more pieces he designed for her. He’s also taping an appearance on “The Tonight Show” with Jay Leno today and a cameo — as himself — on “Ugly Betty.” “It’s fierce. I love it all,” he said. “Some woman just asked me to make her wedding dress. I took one look at her ring and was like, ‘Let’s go, girl!'”

PRETTY PIRATE: Naomie Harris has been tapped to front Spanish women’s retail label Hoss Intropia’s fall advertising campaign. The British actress, who played Tia Dalma in the “Pirates of the Caribbean” movies, will front the brand in Europe, the Far East and North America. Harris’ on-screen plans include a role in “August,” a film to bow later this year, which also stars Josh Hartnett.

PORT OF CALL: “The Hills” star Whitney Port is the third cast member (after Lauren Conrad and Heidi Montag) to jump into the fashion fray: She’s launching a young contemporary line called Eve & A for fall, which will make its debut in the Movement showroom on Friday at the Los Angeles market. Port may not have Fashion Institute of Design and Merchandising training like her co-star, Conrad, but she did grow up in the business. Her father, Jeff Port, owns the apparel company Swarm (the nickname of the seven-person Port family), which manufactures the young men’s line Shades of Gray. The company also is backing Whitney’s line, a 17-piece collection of convertible dresses, tops and jackets that will wholesale for $40 to $250. Along with co-creative director Adrienne Baravetto, Port designs cocktail and partywear, much of which should be appropriate to don at her next gig as an intern at the public relations firm People’s Revolution. So far, owner Kelly Cutrone appears to be putting them to work. Port was spotted at Smashbox Studios handling front of house for runway shows for Peoples Revolution clients Whitley Kros, Orthodox and Julia Clancey.

DO YOU COPY?: Space Age couturier Pierre Cardin, 86, may be the king of licenses — with some 900 agreements for products under his name, from socks to bottled water — but it’s not every day that the designer is asked to license his vintage fashions for reproduction. That’s exactly what French brand Paul & Joe has done. The company, run by designer Sophie Albou, has signed an agreement with Cardin to copy 10 of his vintage pieces each season for the next three years. Albou got the idea to start copying Cardin after buying some of his dresses at auction in Paris. The dresses will be available on a limited edition basis.

FRIENDS AND FAMILY: It was an impromptu reunion of Lanvin designers Tuesday night in Paris at the annual fund-raising gala for the Pompidou museum. Steps away from a giant Louise Bourgeois spider sculpture, Alber Elbaz compared notes with Maryll Lanvin, who held the design reins at the French house from 1980 to 1989. Discussing its famed archive, Elbaz said he visits it often, and that he always finds something new. “There’s always something that catches my eye. My eye is catching and my hand is sketching,” he related, bursting into laughter.

Le tout Paris showed up at the event, including Pierre Bergé, Bernadette Chirac, Maryvonne Pinault (an eye-catching vintage Cartier turtle brooch perched on her shoulder), Martine Sitbon and Azzedine Alaïa, whose fans flocked to him to show off their curve-hugging Alaïa frocks.

INNER WORKINGS: Preaching what she practices, Parisian lingerie designer Chantal Thomass is curating a major lingerie exhibition for the Textile Museum in St. Gallen, Switzerland, where many lingerie production sites are based. It opens May 7 for a six-month run. “It’s about the evolution of the woman’s body throughout time,” said Thomass, adding that the show will encompass corsetry from the 19th century through a range of contemporary creations by the likes of Calvin Klein, Victoria’s Secret and Chantelle.

EYE ON THE PRIZE: Upping the stakes, French fashion association Andam is to allocate a single prize of 150,000 euros, or around $230,000, to a lucky designer on June 25. The award, geared as a financial springboard for young talents, is typically doled out to several laureates with Viktor & Rolf and Martin Margiela among past winners. Contenders for this year’s prize include Rodarte, Threeasfour, Preen and Gareth Pugh. Andam’s organizers have also brought on board a more international spread of jury members, including Jefferson Hack, editor in chief of Another Magazine, and Joseph Quartana, owner of New York’s Seven boutique.