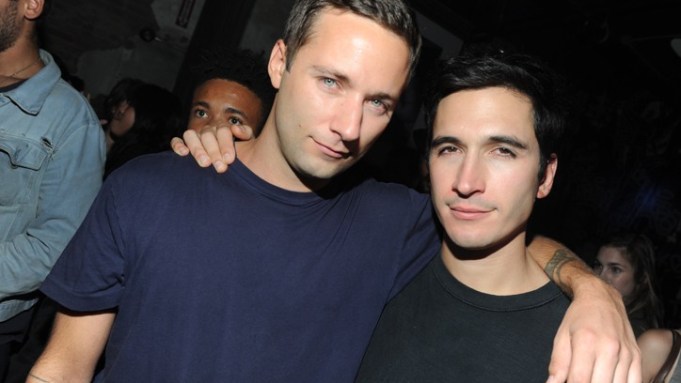 ROSEN’S GAME PLAN: Talks appear to be ongoing between Andrew Rosen and Proenza Schouler. WWD reported in September that Rosen was negotiating with Proenza Schouler about investing in the designer label. Sources said Rosen could be heading an investment group that would buy Permira’s 45 percent stake in the designer firm. Proenza Schouler designers Jack McCollolugh and Lazaro Hernandez, as well as Shirley Cook, the company’s chief executive officer, own the remaining 55 percent.

A Proenza Schouler investment would be separate from Rosen’s other role as founder and co-ceo of Theory, where he also heads up Helmut Lang, owned by Theory’s Japan-based parent, Link Theory Holdings Co. Rosen has personal investments in several contemporary brands, namely Alice + Olivia, Gryphon and Rag & Bone. Both he and Cook were unavailable for comment Thursday. Coming off a strong collection, Proenza Schouler continues to be one of the hottest tickets during New York Fashion Week.

OUT OF THE RUNNING: It looks like Sarah Rutson, fashion director at Lane Crawford, is the front-runner for the fashion director role at Barneys New York. While Virginia Smith, Vogue’s fashion market/accessories director, was said by sources to be in the running as well, Smith told WWD on Thursday that she has no intention of leaving the magazine. As for Rutson, she declined comment on whether she is a candidate.

UPTOWN GIRL: Tory Burch is adding Madison Avenue to her growing retail network. The designer just signed a lease for the full town house at 797 Madison Avenue at the corner of 68th Street. Currently, the location houses Gardenia Restaurant, and Burch expects to move in next fall. No further details were available at this stage, but Burch must be very pleased about the deal as it is just a few blocks from her digs at The Pierre.

SAVE THE DATE: The 2011 CFDA Fashion Awards are scheduled for Monday, June 6, at Alice Tully Hall, which will mark the 10th year that Swarovski is underwriting the event. KCD will again produce the show, and Trey Laird its graphics. Nominees and honorees will be revealed in March.

GOOD BEGINNINGS: Art Basel was off to a strong start Wednesday, as collectors plunked down asking prices or close. And casual dinners have replaced the more formal affairs, with Fendi and Design Miami/ creating the chicest rec room in town at the Standard, where an intimate, designer-heavy scene nibbled on a buffet of sliders and empanadas. Silvia Fendi chatted up guests like Ambra Medda; Konstantin Grcic, the fair’s designer of the year; Ron Arad, and Benjamin Aranda and Chris Lasch, the architectural duo that collaborated with Fendi on a furniture installation at the fair.

Fresh from a Japan jaunt with LVMH chief Bernard Arnault, Fendi chief executive officer Michael Burke reminisced about his Miami days in the early Eighties. “I just love how it manages to remain exotic. There are so few places in the world that can do so,” he said. Delfina Delettrez Fendi, wearing a Fendi 2011 Grecian gown in nontraditional spring colors, planned to hit her local retail accounts like Tomas Maier and Alchemist for events. “But I can’t just abandon my mom at her party,” said Delettrez Fendi, who was looking to squeeze in some beach time most of all. “It’s freezing in Rome, more than usual.”

Later that night, Alchemist hosted a party at Herzog & de Meuron’s building famous for its avant-garde parking garage. Neighbor Shake Shack supplied fast eats for 500 guests like Richard and Laurie Lynn Stark, and Paris Kain from Abraxas Rex. Everyone also got a preview of Zaha Hadid’s prototypes for a cuff and two rings.

Once other dinners like Gagosian’s at Mr. Chow and Christie’s at downtown’s new db Bistro Moderne let out, a throng converged on Deitch/MoCA Los Angeles’ party at the Raleigh. Also keeping it simple, the “roaming” dinner with a sprinkling of celebs and artists from Michael Stipe to Jim Drain, Naomi Fisher and Nate Lowman blew up when LCD Soundsystem took the stage and played to an audience packed to the pool. About three-quarters of the crowd then attempted to get into Le Baron at the Delano’s Florida Room. Those who knew better made a beeline for the W’s bar.

COLD FRONT: Inès de la Fressange, who will star in Chanel’s spring-summer advertising campaign, described the shoot last month as a “miracle.” Karl Lagerfeld chose Saint-Tropez as the location, but the crew arrived to discover gray skies and chilly temperatures. “Suddenly — and this must be the power of Chanel — the sun came out,” the model and Roger Vivier brand ambassador marveled Wednesday night in Paris at an annual charity event where designers create fantasy Christmas trees.

De la Fressange was chuffed by the snow falling in the French capital, as she said it puts people in a good mood. “Everyone can arrive at the office late, and they all have a good excuse,” she said.

Farida Khelfa, who’s finishing up a documentary about Jean Paul Gaultier, said his tree design — a vivid green pine made of fluffy feathers resembling fur — was her favorite. “We had to use five monkeys — green ones — to make it,” the couturier said as he taped a show on the event for TV5 Monde with his journalist buddy Marie-Christiane Marek. In lieu of a tree, industrial designer India Mahdavi created a tiny Santa Claus lost in a snowflake-shaped maze, while Louis Vuitton displayed a tiny trunk lost in a snowy forest. In a more glittering holiday vein were a giant Lady Dior bag filled with Christmas decorations, and a sleek Gucci tower of gleaming logos.

CLASSIC MAYER: When Google vice president Marissa Mayer finishes her day job in Silicon Valley and wants to indulge another passion — fashion — she often finds herself an hour north in San Francisco, such as at Wednesday’s party in the Ralph Lauren store on upper Fillmore Street in Pacific Heights, where she and Jennifer Siebel Newsom, Regina Kulik Scully and Katie Traina hosted a shopping benefit, with 15 percent of sales going to the local free Women’s Community Clinic, which is tripling its space.

Since she was a child in Wisconsin, “I’ve always liked clothes and have been a bit of a label chaser. Growing up, it was Esprit and Guess,” said Mayer, dressed in Ralph Lauren black pants and cap-sleeve silk organza ruffled floral top with black lace arm warmers.

Mayer said her fashion style is “classic,” according to the determination of Google’s new Web site boutiques.com, which uses computer algorithms to match fashion preferences with a style. “The results are uncanny,” said Mayer of how boutiques.com figured out her inclination to wear dark pants and traditional silhouettes, but with a brightly colored top, loud pattern or other trend.