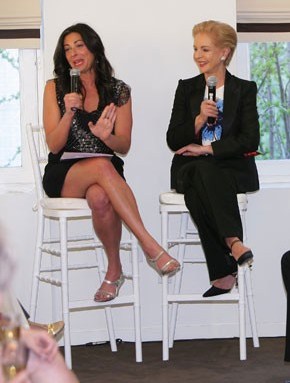 RUSTIC FASHION: The Proenza Schouler boys gathered their nearest and dearest Thursday night to the Ilori store in SoHo in celebration of their new eyewear line with licensing partner L’Amy America. Editors, hipsters and guests like Mary-Kate Olsen and Tory Burch perused the upscale boutique, trying on the brand’s classic-shaped frames. Both Jack McCullough and Lazaro Hernandez hit the party straight from the Berkshires, where they recently bought a home. “I had to shower and shave and get all clean for this,” laughed McCullough. “And we can’t wait to get back up there. We’re going back tomorrow.” In addition to designing collections in the peaceful wilderness, the pair are also using the house to get in touch with their earthy side. “We’ve been raking and gardening and it’s just been really nice,” Hernandez said as he rolled up his sleeve to show off a red scratch. “Except for the fact that I hurt myself.”

DIEGO ON THE MOVE: To keep up with his breakneck work pace, Diego Della Valle relies on private helicopters and jets to shuttle around but soon he’ll be hopping on trains too — his own, actually. The entrepreneur joined forces with three partners, including longtime buddy Luca di Montezemolo (Fiat and Ferrari chairman), to create NTV, a company that will run high-speed trains. NTV is the first private company to compete with the state-run and often inefficient Ferrovie dello Stato. Modern and streamlined, the trains will run at 186 miles pan hour and will be efficient and super comfortable with Poltrona Frau seats. They are slated to start service in 2011. NTV has already ordered 25 futuristic convoys from French train maker Alstom to cover the peninsula’s main trajectories, from north to south and east to west.

CAROLINA UNPLUGGED: Stacy London of “What Not to Wear” chatted up Carolina Herrera at the designer’s Madison Avenue boutique Thursday night as 55 American Express Platinum cardholders hung on every word. The perennially refined designer was at ease with the talk show-style format. Asked about her sources for inspiration, Herrera said, “It is always there. It’s not as though I sit in a dark room and wait for inspiration.”

The attentive crowd soaked up the conversation and Herrera kept them laughing. During the Q&A, one guest thanked Herrera for her panache for pockets. “You know why I love pockets? Because I never know what to do with my hands. And you don’t have to go around with a handbag. Just put your lipstick in your pocket.”

Afterward, Herrera, dressed in a pantsuit and a white T-shirt with an embellished oversize flower, mingled with the crowd as they shopped. But a fashion show of the designer’s latest bridal collection that was presented earlier in the evening left one attendee wondering. She pulled aside Herrera to ask, “Now what about the older woman who is getting married for a second time?”

Meanwhile, the rest of the crowd was carefully leafing through racks of the designer’s clothes. She had given them an added incentive to shop — $500 gift cards — not that they needed it.

THE PRODUCER: Silvia Venturini Fendi is adding film producer to her résumé, with her first picture a drama based on an Italian family in the textiles business. The close-to-home project, to be directed by Luca Guadagnino and starring Tilda Swinton, is based on a book that Venturini Fendi bought the rights to, “La Ragazza del Secolo Scorso” (“The Girl From the Last Century”), written by Rossana Rossanda. Filming is slated to start in June. Getting in the mood, Venturini Fendi will attend the yearly Cannes film festival amfAR gala on May 22.

ARMANI ABS: A|X Armani Exchange steamed up the windows of its new London flagship with some live entertainment Thursday. The Armani brand marked the launch of its Pima men’s underwear collection with a show of live models wearing the merchandise. For the occasion, 10 muscle-bound bronzed models were in store all day, seven placed prominently in the store window and three handing out free wristbands. Crowds thronged at the store for the undies, which range from 12 pounds to 15 pounds, or $23 to 29 at current exchange. There were no sightings of David Beckham, another fan of public underwear displays.