Designer Peter Copping is celebrating the launch of his new bag line for Nina Ricci with a limited edition version of his draped Ambre style. 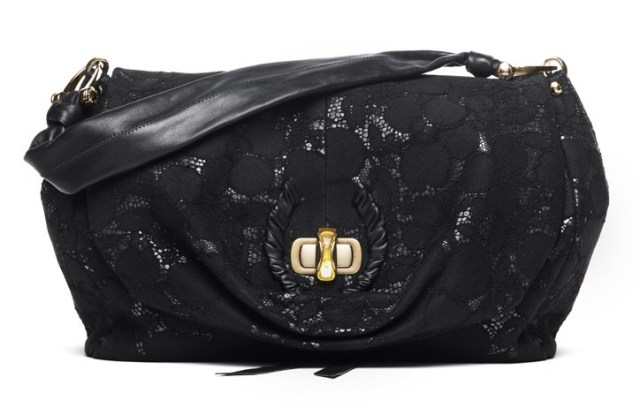 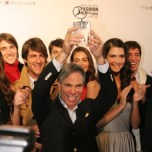 SAC RACE: Designer Peter Copping is celebrating the launch of his new bag line for Nina Ricci with a limited edition version of his draped Ambre style, sold exclusively at Ricci’s Avenue Montaigne store from April 15. The version, in lace-covered black leather, employs the amber-colored acetate clasp echoing the color of L’Air du Temps fragrance. Only 10 of the bags will be made.

JUST DESSERTS: In keeping with the fashion angle for its Thursday night gala and preview of the “High Style” exhibition, the Brooklyn Museum tapped retail’s reigning king and queen of cool, Opening Ceremony’s Humberto Leon and Carol Lim, to get the new guard of American designers involved. Rather than stick to the predictable designers-dressing-guests routine, Leon and Lim have enlisted six labels — Band of Outsiders, Philip Crangi, Patrick Ervell, 3.1 Phillip Lim, Rodarte and Slow and Steady Wins the Race — to create a carnival-like experience during the dessert-dancing portion of the evening. Lim said the idea sprung from food artist Jennifer Rubell, who is making a giant piñata “the size of a room” filled with desserts for the occasion. “We thought it would be fun to have booths where designers could have an activity or a souvenir that they could give to each guest,” said Lim, who will also host an Opening Ceremony booth with Leon. The fashion-infused festivities will range from ring tosses to palm readings to a wheel of fortune.

TOMMY MEXICANA: Tommy Hilfiger’s Mexico business just turned 15 and, to mark the occasion, the designer ventured to Mexico City last week for multiple celebrations. He kicked off his trip with a tour of the city’s Teleton CRIT public health facility and its program for disabled children rehabilitation. Following the visit, Hilfiger accepted Fashion Group International Mexico City’s Sebastian Star award. But the crowning moment of his trip was probably a reprise of his fall 2010 runway show, which was part of Mercedes-Benz Fashion Mexico, and which culminated in Hilfiger receiving the Mercedes Award.

FRESH FACES: Lara Stone is the new face of Giorgio Armani Cosmetics. The Dutch model appears this month in an advertisement shot by David Sims for the brand’s bronze color story. Next up, in September, Stone will feature in another ad image, for Armani foundation. Meanwhile, at the Cosmoprof trade fair in Bologna, Italy, Ferragamo unveiled its new women’s fragrance, called Attimo. Dree Hemingway is in its ad lensed by Craig McDean.

THE ART OF PUBLISHING: Art Ortenberg gave a special shout-out to Diane von Furstenberg, when he thanked her and the CFDA for the support of his new book about his late wife, Liz Claiborne. “She [Diane] is a great woman from Brussels, who’s very much like Liz in many ways,” said Ortenberg. He told the packed room, which gathered at The Salon at Le Bernardin on Wednesday evening to toast “Liz Claiborne: The Legend, The Woman, “Thank you for helping me define the values of Liz’s life.” Among the fashion guests were Vera Wang, Paul Charron, Elie Tahari and Charles Nolan.

IN ON THE ACT: “Eclipse,” the third of the “Twilight” saga films, gets released June 30, so why not put some fresh blood into the fashion inspired by the movies’ main characters? Beginning May 15, Nordstrom will again sell exclusive lace trim tops, miniskirts, striped and floral dresses, skinny jeans, cardigans and plaid jackets, in the style of protagonists Bella and Alice, and priced from $30 to $58, on nordstrom.com/eclipse. Beginning June 4, the collection will be sold at Nordstrom stores as well as online. This is Nordstrom’s second collaboration with Summit Entertainment and vendor Awake Inc. on a “Twilight” collection, following last fall’s tie-in to “New Moon,” the second film in the series. For those bit by the “Twilight” bug, Nordstrom will also sell life-size cardboard cutouts of the main characters, priced $33, and Luna Twilight cosmetics including Twilight Lip Venom. Nordstrom is also planning advance screenings, cast member appearances and Twilight Takeover parties. In “Eclipse,” Seattle, which happens to be Nordstrom’s hometown, is ravaged by mysterious killings, but the retailer isn’t part of the plot.