Could Swarovski be zeroing in on a fragrance deal? According to industry sources, the Austrian crystal giant has been in talks with Groupe Clarins. 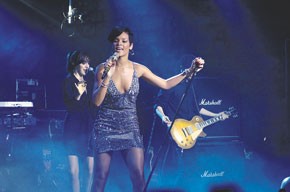 Burberry Gets Into the NFT Game

SPARKLING SCENT: Could Swarovski be zeroing in on a fragrance deal? According to industry sources, the Austrian crystal giant has been in talks with Groupe Clarins. The likelihood of an agreement could not immediately be learned. A Clarins-Swarovski pairing could make a good match, though, considering Clarins’ proven prestige fragrance expertise with brands such as Thierry Mugler and Azzaro. The French beauty firm also has experience in the jewelry world, since it has held the David Yurman fragrance license since 2006. Reached by phone over the weekend, Christian Courtin-Clarins, Clarins’ president and chief executive officer, had no comment on the speculation. Swarovski executives could not be reached for comment.

Meanwhile, Rihanna, sparkling in a crystal-studded dress, performed to some 300 partiers to celebrate Swarovski’s new Swanflower monogram Thursday night. “It was my kind of crowd; they were all dancing and singing along,” said the singer, who next month joins Kanye West for his “Glow in the Dark” tour. “It’s a lot of fashion, so it’s gonna be fun,” Rihanna said, adding that her outfits will be “bold and Sixties- and Seventies-inspired.”

After her show, she and West headed across town to a cabaret club where Brooklyn based-artist Santogold rocked a crowd, including Twiggy, at Stella McCartney’s after-show party. “This is for creative people, like Stella, who pioneer their own paths,” Santogold hollered before belting out her “Creator” track. The singer is wrapping her debut solo album, for which she just shot a video in London, and has just recorded a mix tape with M.I.A. producer Diplo.

French singer Soko, fresh from supporting Kate Nash at an NME gig in London, revealed she’s to play the U.K.’s Glastonbury festival and start work on her debut album this summer.

McCartney, for her part, could finally let her hair down. “I’ve been pregnant for the last three seasons. I can finally enjoy a drink,” she said.

STAIR CASE: It’s nice to know that even strapping Jason Statham, aka Frank Martin of “Transporter” fame, can get winded. “We ran up 1,000 steps of the Eiffel Tower. Thankfully there were no more,” joked the British Olympic athlete-turned-actor at John Galliano’s show Saturday night. Statham, who shared the front-row spotlight with Kanye West, Rihanna and Lucy Liu, said that he was in Paris to film “Transporter 3.” “We’re trying to keep the female lead secret for the moment,” he said.

SHORT CUTS: “Casino Royale” star Caterina Murino debuted a striking new cropped hairstyle Friday night at the bash she hosted to launch the high-end Italian accessories brand Anila. The short cut is for her latest role in “The Garden of Eden” with Richard E. Grant and Mena Suvari. “I play an aristocratic Italian temptress who starts a ménage à trois with a young married couple,” she explained. Private dancer Dita Von Teese performed one of her acts, starting out in a curvaceous, crystal-charged costume by the L.A.-based designer Catherine D’Lish. The gown didn’t stay on for long. “What Catherine makes is fab, and she’s bringing out a line of accessories soon,” said Von Teese, adding that she’s only planning to go to the Louis Vuitton show this season. “I was here for couture, which is much better for me to get inspiration for my costumes,” she said.