Following Eva Mendes' trip to rehab, some wondered what her status was with Calvin Klein - since she was tapped for an upcoming perfume ad campaign. 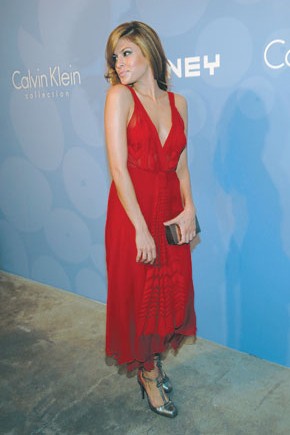 STILL FRIENDS: Following Eva Mendes’ trip to rehab, some wondered what her status was with Calvin Klein — since she was tapped for an upcoming perfume ad campaign. Well, it appears that no love is lost, as Mendes stopped by the Madison Avenue store Wednesday, where she was given several items by designer Francisco Costa himself. The actress was celebrating her 34th birthday and, among many items, received a gray cashmere turtleneck.

MIU MIU MAKES A MOVE: Miu Miu is about to get some new London digs. The brand will open its first London flagship at 150 New Bond Street, on the corner of Bruton Street, not far from the Stella McCartney and Matthew Williamson boutiques. According to a Prada spokeswoman, the new store will open in the spring of 2010, and span the ground floor and lower ground floor for a total of 3,800 square feet. It’s currently empty, but the former occupant was Ungaro.

DELAYED PLEASURE: It’s never too late for the Scots to party. Although Burns Night — in honor of the poet Robert Burns — usually takes place on Jan. 25, Ewan McGregor and his pals postponed their pleasure and held a party on Monday night instead. McGregor, Lady Helen Taylor, Amy Sacco, KT Tunstall, Chrissie Hynde, Sharleen Spiteri, Jonathan Rhys Meyers and Mary McCartney gathered at St. Martin’s Lane hotel to pay homage to the bard. “I know we’re a bit late this year but we couldn’t let Burns Night pass us by without having our usual party,” said McGregor, referring to the scheduling conflicts that prevented the party from taking place in January. The event raises money for the CLIC Sargent charity, and the Children’s Hospice Association in Scotland. The Scottish bagpipe band the Red Hot Chilli Pipers blew their horns; McGregor and Spiteri sang a duet, and Tunstall sang.

OPENING THE DOOR: Elizabeth Arden’s newly retooled retail store at 691 Fifth Avenue is getting a high-profile visitor today: Catherine Zeta-Jones, the brand’s color cosmetics face. Zeta-Jones, in town to snip the bright red ribbon on the door and discuss the brand’s newest lipstick line at a breakfast with beauty editors, is expected at the store around 11 a.m.

DIAMONDS ARE A GIRL’S BEST FRIEND: Jewelry and ballet formed a natural pas de deux Monday evening when Van Cleef & Arpels sponsored the School of American Ballet’s annual Winter Ball at the New York State Theater. During cocktails, co-chairs Coco Kopelman, Liz Peek, Elizabeth Miller and Gillian Miniter greeted guests like Charlotte Moss, Susan Fales-Hill and Marisa Noel Brown, though their efforts were somewhat in vain. “We’re trying to do a receiving line, but everyone keeps skipping us because they just want to party,” laughed Kopelman. Guests sipped Champagne and admired a special preview of the emerald, ruby and diamond pieces in the house’s new Ballet Précieux collection, inspired by George Balanchine’s 1967 work “Jewels” and modeled by a trio of very lucky SAB students. “They should just try to find a sugar daddy and then quit,” joked Jamee Gregory, who had just returned from a restful St. Barth’s vacation. “I’m still rocking because I was on a boat while I was there,” she said.

Peter Martins had his own advice for his bejeweled dancers. “I told them to enjoy it for as long as they can — all three hours,” he quipped. “I go to Van Cleef & Arpels all of the time at the urging of my wife. And sometimes, I am successful.”

DANA BUCHMAN LICENSES: Now that Liz Claiborne Inc. has licensed Dana Buchman to Kohl’s, Dana Buchman outerwear licensee Lou Levy & Sons Inc. is out of what sources called a profitable arrangement. The bridge-gone-moderate brand had only one other license, for eyewear with the Kenmark Group, which will continue because eyewear is sold through optical channels independent of Kohl’s, a Claiborne spokeswoman said. Lou Levy & Sons declined comment.