Yet another star is turning her hand to bedtime stories. 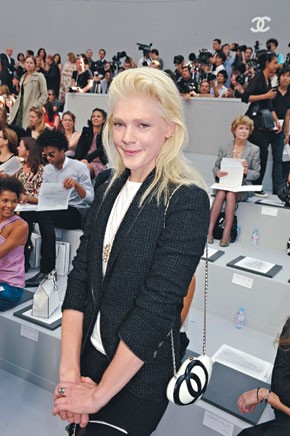 TALL TALES: Yet another star is turning her hand to bedtime stories. At the Chanel couture show Tuesday, Patricia Arquette disclosed that she’s penning a kiddies’ book. “It’s based on my daughter, Harlow Jane,” said the actress. The star, who plays the mother in “Boyhood,” a 12-year-long film project by director Richard Linklater, also proved she’s got no qualms about aging on screen. “We shoot for a week each year. It’s about kids growing up. They age on film and so do I,” said Arquette.

Chanel fixture Ayo, meanwhile, said she’s trying her hand at streetwise fashion with a musical twist. “I’m working on a line with the Paris-based designer Negassi,” she said. “I’ve already made a black jacket with a golden tree on the back made from the words of my first album.”

This story first appeared in the July 2, 2008 issue of WWD. Subscribe Today.

Claudia Schiffer, who has just wrapped up shooting the fall Chanel and Ferragamo campaigns, said she’s looking forward to her yearly vacation in Majorca. “It’s our family villa. I’ve been going there since I was a child,” she said.

For her role as a witch in “Barbarossa,” a historic film set in the 12th century, model-turned-actress Kasia Smutniak doesn’t have the luxury of stunt doubles. “I’m covered in bruises — look,” said the actress. “I’ve been riding horses and fighting.” Smutniak, who was flying straight back to Romania for the movie, directed by Renzo Martinelli and also starring Cécile Cassel and Rutger Hauer, was dressed head to toe in Chanel, “except my underwear,” she clarified.

L’Oréal owner Liliane Bettencourt swapped notes with friend Bernadette Chirac, and already had picked an outfit preshow. “I’m looking for things I am going to wear. I love that,” she said, pointing to an off-white wool ensemble in the press kit left on her seat. Fellow client Danielle Steel, who’s just released her novel “Rogue” and signed a new book contract, has bestowed her taste for fashion on daughter Vanessa Traina, who, fresh from graduating, has begun an internship at French Vogue.

Australian songstress Micky Green is gearing up for almost a dozen festivals in Europe and Japan this summer, plus preparing the worldwide release of her first album and writing a second, but somehow finds time to play. “I’m on the party route,” she said.

But, while the Chanel front row had its usual celebs, a man in the crowd went relatively unnoticed despite the size of his bank balance. Hedge fund multibillionaire and Sears Holdings Corp. chairman Edward Lampert was there with his wife, Kinga.

BIRTHDAY GIRL: The life of a pro football wife may involve a lot of cheering, but it also, apparently, involves a lot of shoes. On Sunday, Houston Texans offensive tackle Ephraim Salaam treated his wife, Reneece, to a two-hour surprise birthday party at the Christian Louboutin boutique in Beverly Hills. Reneece, who arrived at the store with three girlfriends, was lavished with French pastries, Champagne, sparkling water — and a $20,000 spending spree, which Salaam had arranged with the store management. (One of the girlfriends brought the money, said a store employee, who told Reneece upon their arrival: “Ephraim wants you to spend it here.”) After perusing a display of about 12 shoes that her husband had picked out for her a week earlier, Reneece snapped up 14 pairs for herself and bought a pair for each of her friends. “She was totally surprised,” said the Louboutin employee. And lucky. Added the staffer: “He had really good taste.”

HONOR ROLL: With Marc Jacobs, Sofia Coppola, Bernard-Henri Lévy, Gilles Dufour, Paris Mayor Bertrand Delanoe, Vincent Darre, Martin Grant and Ines de la Fressange looking on, American Lee Radziwill was decorated with the French Legion of Honor by French actress and singer Arielle Dombasle in a private ceremony Tuesday evening. Dombasle, who hosted the event in her Left Bank apartment, called Radziwill a “model of excellence for all women” and recounted Radziwill’s long love of French culture, which dates to her youthful visits to the Continent with her late sister, Jacqueline Kennedy.

Much moved by the honor, Radziwill had her daughter, Tina, read a speech in which she expressed her gratitude and admiration for France.

“I love French elegance, from couture to cuisine,” said Radziwill.

PLAYING IT SAFE: France’s road-safety campaign scored some extra airtime at the Chanel show Tuesday, when bodyguard Sébastien Jondeau accompanied Karl Lagerfeld for his bow wearing the fluorescent vest the designer advocates in this summer’s ads. Sporting a wry smile, Jondeau looked like he probably took some persuading, but as the tag line reads: “It’s yellow, it’s ugly, it doesn’t go with anything, but it could save your life.”

SNAP HAPPY: Add Olivier Theyskens to the list of fashion designers who dabble in photography. The Belgian turned his lens on his Nina Ricci resort collection to create the Paris house’s look book for the season. According to a Ricci spokeswoman, all such photography is done by Theyskens.

HAMMER TIME: Following the death of couturier Yves Saint Laurent last month, interest in vintage YSL continues to heat up at auction. One of the designer’s iconic safari jackets in beige gabardine from 1969 sold at auction by Lasseron & Associés in Paris on Monday for 1,500 euros, or $2,355 at current exchange, handily exceeding its pre-auction estimate of 800 euros, or $1,256.

TEAM SPIRIT: “It smells amazing in here,” Juicy Couture’s Gela Nash-Taylor cooed as her heels dug into the fragrant wood that blanketed the runway at the Givenchy couture show Tuesday night. Nash-Taylor is in town for the latest gig of her husband, Duran Duran bass player John Taylor, at La Cigale tonight. “They collaborated with Mark Ronson so it’s going to be amazing.”

WHO’S THAT GIRL?: Turning up in an $8,000 Balenciaga dress to flit around snapping Janet Jackson before taking a front-row seat at Christian Lacroix is one way to make an impression. “I wore it to my senior prom,” disclosed chirpy 18-year-old Julia Frakes, who just graduated from Wyoming Seminary. Frakes, who filmed Lacroix’s entire show while proud mom Jane Alperin took photos of each look, has been blogging for Paper magazine’s Fashion Schmashion column for the last six months, after brazenly asking the magazine’s co-editor and co-publisher, Kim Hastreiter, to be her friend on Facebook.

“When she came in, I was kind of shocked to see how young she was — she was 17 when she first came to us — but boy, was she adorable and smart as a whip,” said Hastreiter.

Writing is in Frakes’ genes — grandfather James Frakes was the book critic for The New York Times, while actor Jonathan Frakes of “Star Trek” fame is her uncle. With her childlike appearance, possibly a result of her vegan diet, Frakes may not look college age, but she likely will defer her college acceptances for fall to carry on blogging.

Though insisting she’s not remotely a fashionista, Helen Mirren does turn her hand to design. “I make my own clothes, because I never found the kinds of things I liked,” the actress said at Lacroix. “My mother taught me how to work a sleeve and make a placket. Of course, those were the pre-Primark days.” And Mirren had some strong words about the low-value clothing chain. “I won’t buy from Primark. It’s tempting, but immoral. I’d rather go to jumble sales and buy secondhand than buy slave-labor clothes.”

Actor-cum-director Edouard Baer, meanwhile, said he’s off to Canada in a week for the opening of a cabaret that he’s produced. “It features an unknown French cast,” he said of the show, dubbed “Edward Baer, Puzzle.”