Before even showing his first women's collection for Ferré, there already might be growing tension between Lars Nilsson and his bosses. 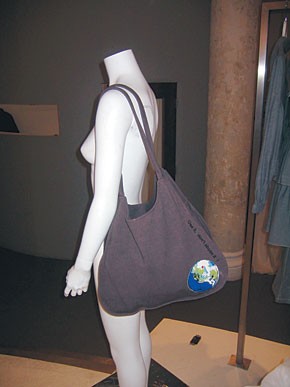 TROUBLE IN FERRE LAND?: Before even showing his first women’s collection for Ferré, there already might be growing tension between Lars Nilsson and his bosses. The Swedish designer’s stint at the Italian design house began in September, when he succeeded Gianfranco Ferré, who died in June. Nilsson is said to be behind schedule preparing the collection. Neither Nilsson nor executives of IT Holding SpA, the Italian parent company of Ferré, returned calls.

TERRY’S TURN: With his show staged in the home of opera, the newly engaged Tommy Hilfiger may be a long way from his rap roots in the Nineties — but Pharrell was still there to bow to Anna Wintour in the front row of Thursday night’s show at Lincoln Center. Other front-rowers included Julianne Moore, Maggie Gyllenhaal and Helena Christensen — all in Hilfiger.

But before the show, behind the scenes, more important conversations were going on when Macy’s Inc. chief executive officer Terry Lundgren popped backstage at 6:15 p.m. (for the 6 o’clock show) to get his first peek at the line, which is now exclusive to the retailer. “It’s all been very top secret,” the ceo said. Lundgren and Hilfiger looked at a bulletin board filled with pictures of the looks. Did retail’s most powerful executive have a favorite look? “I already love the camel coat,” he pointed to a shot of a peacoat.

“You won’t find a jean on the runway,” Hilfiger said. “That’s a separate part of the business now. I wanted to bring back American sportswear as we knew it back then.”

ALL ABOUT EVA: Eva Longoria Parker dropped by the tents Thursday morning to see Naeem Khan’s fall finery. He did, after all, design the white gown she wore to the SAG Awards just last month. While New Yorkers are being inundated with commercials for her new comedy, “Over Her Dead Body,” the “Desperate Housewives” star is eager to get back to her TV show. Tony Parker’s wife is already at work on “Lower Learning,” a comedy with Jason Biggs. She also has lined up her first animated role as Lady X in the forthcoming “Foodfight!” with Charlie Sheen and Hilary and Haylie Duff. But the diminutive actress was keeping any fashion week antics to herself. “Lots of funny things have happened, but nothing we can talk about,” she said, slyly smiling at stylist Robert Verdi.

This story first appeared in the February 8, 2008 issue of WWD. Subscribe Today.

HOLDING TIGHT AT 13: The meeting Thursday between Liz Claiborne Inc. and a consortium of buyers led by Windsong Brands and the Radius Group did not result in closing on the sale of Ellen Tracy. After unsuccessfully spending the day haggling over price, the two parties are scheduled to confer again Monday, which sources said will be a make-or-break day for the deal. Claiborne has promised to either sell the bridge brand to the sole remaining bidder or keep it if Ellen Tracy doesn’t earn a high enough price. The vendor has reportedly put a mid-February deadline on deciding the fate of 14 of the 16 brands Claiborne put on review in July.

DEACON BECKONED: What better moment than the fashion shows to officialize a new creative collaboration? That’s exactly what Fay’s chief executive officer, will do on Feb. 19 when he formally introduces Giles Deacon to the fashion pack. Deacon, in fact, will design a small and special collection for the Tod’s Group-owned Fay that will be sold alongside the brand’s more traditional sportif-chic garb. For the first time, Fay will stage a presentation at PAC, Milan’s contemporary art pavilion and Tod’s longtime showcase for new collections, because the latter will exhibit its fall wares at the newly refurbished store.

TEE TIME: Irina Lazareanu has something to get off her chest. Backstage at the shows this week, the Canadian model — along with a slew of her fellow Marilyn Model Management mannequins, such as Iekeliene Stange and Angelika Kocheva — is wearing a T-shirt emblazoned with the seal of Global Action for Children (Angelina Jolie’s charity). Lazareanu hopes that, by wearing the shirt while prepping for hair and makeup, she will raise awareness of the initiative, which benefits children in developing countries. “No one has asked me about the shirt yet, but I hope that will change by the end of the week,” the model said while primping for the Matthew Williamson show on Tuesday afternoon. Lazareanu hopes to continue her work with the charity by partnering with Chanel (for whom she shot a 2006 ad campaign). Says the mannequin: “I’m their client, so I think they will do it.”

FROM L.A. TO NEW YORK: Tonight, wacky designer Jeremy Scott hosts the opening party for the New York outpost of Los Angeles club Mansion. (Fittingly, his upcoming Paris show was inspired by the idea of an “opulent mansion.”) The West 28th Street nightclub, which is a joint venture from nightlife fixtures Eric Milon and Mark Baker, will celebrate its first night in business with DJ sets from model Agyness Deyn and the Misshapes. Earlier in the night, Prada model Sasha Pivarova will display some of the artwork she’s been making in her spare time on the road.

ROCKER CHIC: If you see rock stars at the 50th annual Grammy Awards on Sunday all decked out in Elie Saab gowns, H.Stern bling and Hugo Boss suits, then you know they dropped by the styling suite held at Smashbox Studios in Hollywood to pick up the free duds. The week before the ceremony, the Grammys sponsored the suite to allow clothing brands — including England’s Vivienne Westwood, Los Angeles’ Thrive, Australia’s Toni Maticevski and Scandinavia’s Moods of Norway — the opportunity to dress the nominees, presenters and their entourages.

The Black Eyed Peas’ Will.i.am worked both side of the tables, checking out Thomas Pink’s tuxedo shirts and offering Ts and bomber jackets from his i.am line to visitors.

Ali Hewson, who started Edun three years ago with her rocker husband, Bono, and New York designer Rogan Gregory, was a first-time participant in the styling suite, though she’s been to the Grammys many more times with Bono and his band, U2. “This is calm,” she said, comparing the styling suite with the Grammys’ backstage chaos. And gifting Edun’s japonica-printed silk shifts and other items to musicians made her feel like part of the Grammys. “Before, I was just turning up with someone else who had a reason to be there,” Hewson said.

TYSON’S CORNER: This season’s attempt at using more diverse casting hasn’t exactly floored Tyson Beckford in terms of its diversity. Before Thursday’s Reem Acra show, he said, “It’s a problem we’re working on. A lot of designers are aware of it, but we want to make more designers conscientious of it. I don’t mean just black. We’re also talking about Latino and Asian. [These companies need to know] your customer is not just one race. You never want to cater to just one race. You can call that racism.”

MARCH ON D.C.: Copyright protection has long been an issue near and dear to Narciso Rodriguez — particularly when faced with the indecency of an estimated eight million knockoffs of the slipdress he designed for his friend, Carolyn Bessette Kennedy, sold by other vendors. On Thursday, Rodriguez plans to hit the nation’s capital with Council of Fashion Designers of America executive director Steven Kolb to make a case for a pending bill to protect original designs. The two will participate in a special hearing on design protection with the House Judiciary Subcommittee on Courts, the Internet and Intellectual Property, and Rodriguez will lobby for the bill’s approval and discuss how it can protect the industry’s health.

YOU’RE HIRED: Apparently, Ivanka Trump’s interest in design extends beyond jewelry. The 26-year-old has designed the uniforms for the Trump Hotel Collection, the new luxury brand she heads up with her brothers, Donald Jr. and Eric. But she didn’t dive into this blind — the Chatsworth, Calif.-based House of Uniforms helped produce the Trump Metro Collection, which will be worn at the New York, New Orleans, Toronto, and Aberdeen, Scotland, properties. Concierges and front-office associates are already wearing the Trump-designed three-piece suits at the week-old Chicago property. She is also suiting up doormen, housekeepers and other staffers at the city locales as well as at Trump Resort Collection’s forthcoming digs in Las Vegas, Dubai, Waikiki and other destinations.

ANOTHER GREEN IDEA: Some projects come together after much angst. Others seem to happen by kismet. Alvin Valley describes his eco-tote for Duane Reade as the latter.

“[Duane Reade] approached me because they wanted to do something of an eco-friendly tote,” said Valley. “I said I’d participate only if there is an organization I can tie in with.” Around the same time, Valley had been asked by his friend, Amanda Hearst, to become a founding member of New Yorkers for a Green New York. “I said, ‘What do I bring to the table?'” Then he remembered Duane Reade and decided that the tote could be his contribution.

Duane Reade on Tuesday unveiled the bag, a soft gray hobo-style bag, at its location near Bryant Park on Broadway and 40th Street. The bag bears the slogan “Use It, Don’t Abuse It” and an image by artist S.A. Longshore. Valley was on hand along with Hearst and New Yorkers for a Green New York’s Annie Churchill, Tony Cummings and Billy Gilbane to sign the totes. The project will support the Stevenson Green Roof Project in the Bronx, a public-private partnership that will transform the barren concrete roof of a building that houses seven schools into a living laboratory for students to experience hands-on learning.

Valley said Duane Reade is paying the production costs for the bag and donating a portion of sales of the $14.95 tote. Asked why he decided to work with Duane Reade rather than a more upscale retailer, Valley said: “I didn’t want to do this one little bag that’s so expensive that only 10 people could have it. I’m really about pop culture. I want New Yorkers all over the street to be wearing it. A bag that only a few fashionistas know about? Or go after the mainstream. It was an amazing project with 25,000 bags for the first run.”

LIV’S LOVE
“I think designers work harder than anybody,” said Liv Tyler Thursday afternoon. And so she showed up at the Calvin Klein show in support of her friend, Francisco Costa. Contrary to what one might think, the model-cum-actress isn’t exactly a front-row regular and contends she’s only been to Marc Jacobs’ show, a celeb-fest if ever there was one, twice. “Five years ago, celebrities and actresses didn’t really go to shows,” she said. Since then, she’s been otherwise engaged, raising her three-year-old son, Milo.

But her role as Costa’s bold-faced bestie on Thursday allowed her a night off from mommy duties. She hosted a private dinner for the designer at the Waverly Inn, to which she was looking forward that afternoon.

“They told me I get to invite whoever I want. I don’t get out much, so I get to see all my friends.”

Tyler was seated next to “Heroes” star Ali Larter in the front row. As for the writers’ strike, she said: “Well, it looks like it’s going to be over. But I’m at fashion week, aren’t I?”