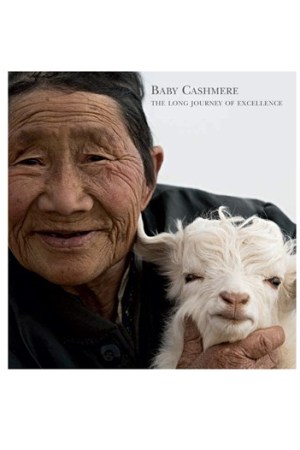 ULTRA LUXE: Bergdorf Goodman spotlights baby cashmere this week, with a gallery-style exhibit today through Nov. 14 illustrating the great lengths Loro Piana goes to source the precious fiber from Mongolian shepherds and transform it into coats, sweaters, capes and scarves that are extremely warm, lightweight and soft, and sold just at BG and LP stores. “It’s incomparable,” said Sergio Loro Piana, LP’s co-chairman and chief executive. Baby cashmere, he noted, is “derived from the first and only combing of hircus kid goats aged 3 to 12 months with a diameter of 13 to 13.5 microns, versus 14.5 of adult goats.”

According to BG’s executive vice president of merchandising, Ginny Hershey-Lambert, the underfleece of 19 baby kids is needed to make a pullover, 58 for an overcoat. “You really have to see it, feel it and hear the story to understand how special it is, and how LP worked so closely with the people and the land and their animals to gently bring this product to market.” The story of Loro Piana Baby Cashmere, a registered trademark, has been documented by photographer Bruna Rotunno in a book, “Baby Cashmere: The Long Journey of Excellence.”

This story first appeared in the November 3, 2010 issue of WWD. Subscribe Today.

PEACE REIGNS: It looks like there’s another group that’s even more exclusive than the luxury world. Eight days after the Hells Angels sued Alexander McQueen, Saks Fifth Avenue and Zappos.com over the sale of Alexander McQueen merchandise bearing a winged skull logo and the Hells Angels’ trademarked name, the members-only motorcycle club is settling with the luxury fashion house and retailers. Fritz Clapp, the attorney who filed the trademark infringement lawsuit in Los Angeles federal court for the Hells Angels, said the three companies have removed the Alexander McQueen knuckle-duster rings, clutches, jacquard dress and pashmina, retailing for between $495 and $2,329, from their Web sites and stores. While the Hells Angels also requested financial damages based on profits earned by the fashion companies on the merchandise, Clapp said there is currently no estimate on the exact number of items that were sold. Having used the marks since its inception in 1948, the Hells Angels offer the patches, clothing and jewelry bearing the mark only to members. “They consider it quite exclusive,” Clapp said. “They consider themselves members, not someone who bought a $495 ring.”

LANVIN LOVE: Every sale of Lanvin (heart) H&M, bowing on Nov. 20, will be crowned with a signature garment bag decorated with paintings by Lanvin designer Alber Elbaz. Shoe and jewelry boxes are also decorated with his illustrations. The collection has the highest number of high-priced items of any previous launch due to the preponderance of dresses priced from $199 to $249. The most expensive item in the line is a coat with jeweled buttons and a fake fur collar. For the first time, H&M is opening all of its U.S. stores at 8 a.m. the day of the launch, rather than the usual 10 a.m. due to perceived pent-up demand for the collection. “We’ve been getting such great response,” a spokeswoman said. “Madonna and J.Lo have [already] asked for pieces from the collection, but we’re not lending out clothes until the runway show on Nov. 18.”

RECYCLE CHIC: Trust Hermès to turn recycling into a luxury pursuit. The French house is launching a collection of objects, ranging from woven leather necklaces to customized Kelly bags, made with leftover pieces of leather and damaged goods. Under the artistic direction of Pascale Mussard, a sixth-generation descendant of the company’s founder, a workshop dubbed “petit h” (or “little h”) brings together seven of the house’s craftsmen with artists to give the objects a second life. Its first collection features creations including a lamp shade made of silk scarves, designed by Adrien Rovero, and a leather statue of a fawn designed by Marjolijn Mandersloot. Priced from 50 euros to 50,000 euros, or $70 to $70,000 at current exchange rates, it will be on sale at the Hermès flagship store at 24 Rue du Faubourg Saint-Honoré in Paris from Nov. 13 to Dec. 4. A second collection will be available in Tokyo and Osaka in May 2011, while the third collection will be sold exclusively in New York and Beverly Hills in October of next year.

THE BAMBOO BUNCH: Christie’s will be selling its biggest selection yet of vintage Gucci bags as part of an eclectic auction set to take place in South Kensington, London, on December 2. Some 30 handbags and pieces of jewelry will go under the hammer in the Fashion through the Ages sale, which will offer lots ranging from 17th century costumes and textiles to pieces by Versace.

The Gucci pieces have landed at Christie’s via a partnership between the auction house and the Italian brand that launched earlier this year, known as Gucci Collector: Presented by Christie’s. Christies.com allows Gucci owners to upload photos of vintage items and submit an appraisal request. A team of Christie’s experts and Gucci’s in-house archivists have a look at the items and provide auction estimates for the best ones. Owners then have the opportunity to sell to Gucci or at a Christie’s auction.

Pat Frost, head of costume and textiles at Christie’s, said the site has been getting submissions from all over the world — more than 600 from some 20 countries — and especially from the U.S. and Italy. Estimates for the bamboo handle or clasp bags range from 600 pounds, or $960, to 1,200 pounds, or $1,920.

ABOUT THE FUTURE: Belstaff has renewed its ongoing relationship with Hollywood by designing the costumes for the Disney 3-D movie “Tron: Legacy.” The sequel to the legendary 1982 film by Steven Lisberger will debut in theaters on Dec. 17.

For the clothes, in order to enhance the movie’s special effects, Belstaff used Energear, an exclusive fabric produced by Swiss manufacturer Schoeller Textiles. Energear is made with natural fibers that take infrared rays produced by the body and reflect them back, helping circulation and increasing oxygen levels in the blood.

“We dress heroes,” commented Franco Malenotti, president of Belstaff, referring to the numerous appearances of the brand’s products in cult movies including the iconic “MMM the Blouson” in “Mission: Impossible III” and the three different jackets worn by Shia LaBeouf in the recent flick “Wall Street: Money Never Sleeps.”

The company also confirmed that it will design a special “Tron: Legacy”-inspired jacket that will be included in the next fall collection.

MULBERRY GOES CAMPING: Mulberry presented a Soho House screening on Tuesday night of photographer Tim Walker’s first foray into filmmaking, “The Lost Explorer,” an adaptation of Patrick McGrath’s short story about a young girl’s loss of innocence upon finding in her garden a man in a tent who is in the end stages of malaria. The screening was followed by a dinner hosted by W editor in chief Stefano Tonchi that drew guests like Michelle Trachtenberg and Mulberry creative director Emma Hill.