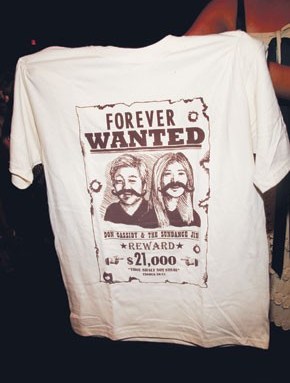 VIGILANTE JUSTICE: Don’t mess with Anna Sui. As her many fans and friends know, the designer is one tough chick, and she proved it at her show Monday by taking the law into her own hands. In each goodie bag, her guests found T-shirts emblazoned with “Forever Wanted: Don Cassidy & The Sundance Jin, Reward $21,000,” around a caricature of Don and Jin Chang, the owners of retailer Forever 21, which Sui is suing for copyright infringement. The bottom of the T reads “‘Thou shalt not steal’; Exodus 20:15,” a reference to the Changs’ devout Christianity and the “John 3:16” that is printed on every Forever 21 shopping bag. “I thought it would be funny,” the designer said backstage after her show. “I can’t really talk about it because I am in litigation, so that was my statement.”

In April, Sui filed a copyright lawsuit against the retailer alleging it has been making an ongoing practice of copying her designs since late 2005. Other brands that are similarly taking action against Forever 21 are Diane von Furstenberg and Gwen Stefani’s Harajuku Lovers line.

Probably unaware of all the insider hoopla was Evanescence lead singer Amy Lee, who was attending her first-ever fashion show. The avid Sui fan makes a habit of shopping at the SoHo boutique, where she said the staff invited her to the show. The crush of press and fans around her left the singer marveling at her good luck: “It’s such good publicity,” she said, wide-eyed. “I had no idea!”

Considering her upcoming plans, it’s kismet: Evanescence embarks on its U.S. tour Oct. 23. Down the runway was a more precocious star: Leighton Meester of the much-buzzed-about “Gossip Girl” TV show. Already a veteran of L.A. Fashion Week, she is now tackling New York. And not surprisingly, between the collections and the high-end wardrobe of her TV alter ego, Blair Waldorf, her fashion appetite has increased. “It used to just be shoes and bags,” she sighed. “Now it’s opened it up to everything.”

OSCAR’S ACES: Victoria Beckham just loves America. At the Oscar de la Renta show Monday, Beckham couldn’t help but rave about her newly adopted country and de la Renta. “L.A. is wonderful, I have never been happier,” she said. “The sun is shining, everyone is friendly and the kids are surfing.” Even Posh has made it onto a surfboard, though not in her ubiquitous high heels. “You know what, I would do that,” she joked. (After the show, she headed over to Fred’s at Barneys New York for lunch — even booking a separate table for her two bodyguards. And Posh seemed to love the joint so much she came back at 4 p.m. for coffee.)

But she was upstaged at the show by another import: the crowd applauded U.S. Open-winner Roger Federer when he emerged from backstage with Anna Wintour and his girlfriend Miroslava “Mirka” Vavrinec. “This is my last appearance,” he vowed. “I am going home tonight.”

BRIT BRIGADE: On Monday afternoon, the cast of “The Jane Austen Book Club” (in theaters later this month) lunched at Brasserie Ruhlmann to fete the film’s release. And though the movie is set in Los Angeles, it’s no surprise that it’s rife with Brits like Lynn Redgrave, Emily Blunt and Hugh Dancy. “It’s a rule,” Dancy deadpanned, “that any movie with Jane Austen in the title must feature at least three or four English actors.” But while the upper-crust English thespians may have played laid-back Californians in the film, Redgrave, for one, insisted art does not imitate life. Asked how she prepared for her role as a free-spirited hippie, the actress said simply, “I did not smoke pot, if that’s what you are asking.”

GILDING THE CALVIN: It seems the company known for its austerity will get slightly decorated today. Jewelry design firm Abraxas Rex has teamed up with Francisco Costa, creative director of Calvin Klein Collection for women, to create a selection of rings and cuffs embedded with stones such as meteorites, Herkimer diamonds and traditional diamonds for the show. “As crazy as the materials are, they complement the clothes,” said Rex designer Paris Kain.

EVERYBODY’S A CRITIC: Carolina Herrera’s front row Monday included two pint-size supporters — her granddaughters Carolina Lansing and Olimpia de la Concepción. The well-dressed tots waited patiently on the laps of their mothers, Patricia Lansing and Carolina Herrera Jr., before things got underway. Apparently, the third generation is already showing signs of being tastemakers. Before the first model took to the runway, the younger Lansing, whose first show appearance occurred at the age of nine months, was busy backstage pointing out which looks she did and did not like, her mother said.

HASTY RETREAT: Agyness Deyn had the final spin in Oscar de la Renta’s show, but she was one of the first ones out the door afterward. While showgoers stood beneath umbrellas phoning their drivers or trying to hail cabs, the British blonde pedaled down Fifth Avenue smiling on a three-speed bicycle.

FASHION WEEK SCANDAL: Ron Smith pulled the plug on a group fashion show he had organized for Sunday at the Hudson, disappointing participants who got word via an e-mail Saturday that read, “Show is not happening. Best, Ron.”

Smith couldn’t be reached for comment (his cell and home phones aren’t accepting any more messages) and the five participants are out more than $5,000 each. According to one, Vengsarkar Budhu, an FIT graduate who was awarded “Designer of the Year” and the Reem Acra Critics’ Award, as well as the Saks Fifth Avenue women’s wear award upon his graduation last year, he gave Smith $5,500 to participate in the show, and had spent almost $10,000 in total on silks, pleating, beads and fabrics. He said he received Smith’s e-mail on Saturday that the show was cancelled, and has been unable to get in touch with him. He said he got the feeling something was up when he went for the fittings, and Smith didn’t show up.

“The hotel said he booked the space and never paid for it,” said Budhu. A spokeswoman for the Hudson didn’t return a call seeking comment. “I spent the last three months making these clothes,” said Budhu, who works part-time at FIT. “I don’t have a company, but if I got an order, I would make it.”

WELL SHOD: Giving those standees at the Bryant Park tents something to look at while waiting to go into the shows, the fountain display has always been prime real estate for accessories. This time the Italian Trade Commission bought the whole kit and caboodle to remind us that Italian shoes are the gold standard. ITC Commissioner Aniello Musella said business for Italian shoe exports has been great this past year, rising 11 percent, or about $600 million, so it was time to celebrate. Shoe giants such as Rossimoda, Vicini, Ballin and Rodo are displaying their goods through Wednesday.

INCH BY INCH: At Alberta Ferretti’s Philosophy presentation Monday, Padma Lakshmi said she was on the hunt for on-air attire for “Top Chef” and would also cruise by Marc Bouwer and Marc Jacobs. Some wanted to know how the former model keeps the extra pounds at bay. “I tell people that I really exercise a lot. It’s not easy to do that. I box, roller skate and lift weights. Even if I have only have half an hour, I will go on the treadmill. I also keep a jump rope in my suitcase,” she said.

Well-aware that her ultrahealthy off-the-set diet can only compensate so much and her high metabolism isn’t as high as it used to be, Lakshmi said, “Whenever we do fittings for the show, we always leave a few inches in case I gain a few.”

DOESN’T IT FEEL GOOD?: Payless ShoeSource’s Matt Rubel flew in to New York from the company’s home base in Kansas City to see the Payless shoes for Lela Rose — and he received whopping praise. “Two of the dressers at Lela Rose came up to me and thanked me. I said ‘why are you thanking me?’ And they said ‘because we can afford those!'” said Rubel. All the shoes, including leather-trimmed slingbacks and more casual ballet flats, retail for under $30. The company also has partnerships with Abaeté and Alice + Olivia. “The spectacular thing is watching this talent be platformed in a new category and create such amazing product,” he added.

‘CONFIRMED’ BACHELORS NEED NOT APPLY: The casting producers over at ABC might do better to tailor the address lists they use when sending out mass e-mails for casting calls. A request for candidates for the next “The Bachelor” was recently sent to fashion editors. It read, “We are on the search again for the perfect candidate and I would love to talk with someone at your magazine about the possibility of becoming this season’s pick! If you know of anyone who might be perfect (20s/30s, dynamic, attractive, successful in any career, single), please let me know.”

Now, unless the show is taking a dramatic turn, one would assume the producers are also looking for a straight bachelor. At a fashion magazine? Good luck. Yes, it’s cliché, but there is some truth to the notion that finding a straight man working at a fashion publication is as easy as getting Stefano Tonchi to wear socks. You’d think ABC understood that. After all, it is the network that shows “Ugly Betty.”