Japanese actress Shinobu Terajima, who was born into a famous kabuki family, took in her first Paris fashion show when she went to Kenzo on Saturday. 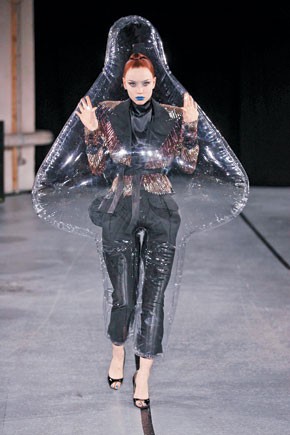 WATERWORLD: Japanese actress Shinobu Terajima, who was born into a famous kabuki family, took in her first Paris fashion show when she went to Kenzo on Saturday. Another first: Terajima just portrayed a mermaid in a “monster” film aimed at children. “Usually I play humans,” she said with a laugh. The role had her donning a wet suit, then a mermaid costume and then plunging into cold waters. “What a hard shooting,” she exclaimed. Fortunately, it’s back to the dry stage for her this fall. Up-and-coming French actor Andy Gillet said that he just shot the campaign for Kenzo’s next men’s fragrance. “I don’t even know what it’s called yet,” he said. “It’s top secret.”

DOWN TIME: Lapo Elkann is the latest designer to hook up with Moncler, the Italy-based down jacket specialist, for his lifestyle brand Italia Independent. The collaboration produced two unisex garments, a black down vest and slim-fit hooded jacket. Both pieces, unveiled at Elkann’s Pop Art-filled pad here Friday, will hit stores in July, with an exclusive U.S. department store deal with Barneys New York. “I’ve tested [the jackets] in Paris, in New York and in the mountains in Italy,” said Elkann. He also plans to put one of his new techno peacoats, lined with a wind- and water-proof membrane, through its paces when he sets sail on a cross-Atlantic voyage this November in his state-of-the-art sailboat, named Stealth.

AIR SUPPLY: Some designers work in a bubble; José Castro puts them on his runway. On Friday, he sent out two outrageous looks that left the audience — but thankfully not his models — gasping. His bubble girls — ventilation systems attached — underlined the message that puffed-up volumes are in; germs are out.

BREATHING EASY: The Bleu Comme Bleu beauty salon, off the Avenue des Champs-Elysées, recently opened what’s billed as Paris’ first oxygen bar — just in time to ease end-of-the-fashion-marathon malaise. The purified oxygen comes scented with aromatic cocktails, including Retour de Fête (Post Party), a zesty ginger, peppermint and lemon mix designed to help with headaches and hangovers. Proponents of oxygen bars — already popular in the U.S. and Japan — say it can increase alertness, reduce stress and reinforce the immune system. Each 10- to 15-minute session is free-of-charge to Bleu Comme Bleu clients and 10 euros, or $15.20 at the current exchange rate, for everyone else.

LICENSE TO THRILL: It was an action-packed front row at Louis Vuitton, which included new James Bond girl Gemma Arterton, who stars as Agent Fields opposite Daniel Craig in the upcoming “Quantum of Solace.” “I have to remember this moment for the rest of my life,” purred the actress, whose next film will be “Tess of the D’Urbervilles.” “I get to wear hair extensions and transform myself into a real English rose,” added Arterton, who also has been tapped to be the face of Avon’s upcoming Bond Girl fragrance. Meanwhile, actress Maggie Gyllenhaal said she was looking forward to filming “The Private Lives of Pippa Lee” after the big-budget superhero experience of the upcoming Batman film, “The Dark Knight.” “It’s an absolutely independent movie,” she said of “Pippa Lee,” in which she appears with Julianne Moore and Winona Ryder. Speaking of independents, director Wes Anderson said that, up his sleeve, he had a new animated feature, to be called “Fantastic Mr. Fox.” Rounding out the glitterati were designer Yohji Yamamoto, Taiwanese actress Janine Chang and French actress Melanie Laurent, who hinted that she has a secret fashion project brewing.

BEING ANNA: No, Anna Wintour wasn’t at Lanvin. The Vogue chief was already on her way home. But French TV presenter Mademoiselle Agnès tricked a lot of people — including security — by imitating Wintour — bangs and sunglasses to a T — at the show. “Getting through security was mighty speedy,” she quipped, explaining that she dressed like Wintour for a joke for her show.

NIGHT OWLS: “‘Ain’t Nobody’ by Chaka Khan: It’s the best to get people dancing,” hollered a beaming Stefano Pilati, one of several DJs, including Chloë Sevigny and Ludivine Sagnier, who hit the decks for a party held by Colette and Self Service magazine at Le Lup Saturday night. Anja Rubik, who stormed the dance floor with Jacquetta Wheeler, handed out hangover cures. “Actually, a glass of wine is the best,” she offered.

CAR AND DRIVER: Belgian designer Martin Margiela loves to cover anything and everything in boiled cotton — from coat hangers to the furniture in his store. On Saturday night at a Parisian garage, he unveiled a trompe l’oeil car cover, one of a series of tarps by designers such as Lutz, Richard James and Ksubi, commissioned by Intersection magazine.