Harvey Weinstein's wedding to Georgina Chapman Saturday night was capped off with fireworks... 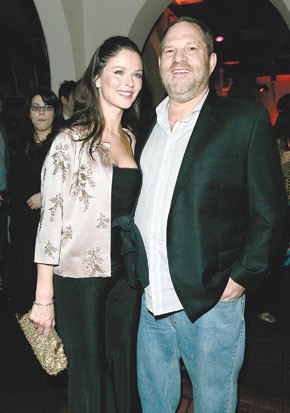 WEDDED BLISS: Harvey Weinstein’s wedding to Georgina Chapman Saturday night was capped off with fireworks — a picture perfect ending for the Hollywood giant and fashion designer pairing. The Weinstein Co. mogul threw one serious party at his waterfront Westport, Conn., home and, not surprisingly, no detail was left to chance. Guests parked at a nearby school and were ferried to the festivities. And why not? Weinstein, a self-described “boy from Queens whose socks never matched,” tied the knot with Marchesa golden girl Chapman.

Weinstein was dressed for the occasion in a custom-designed Tom Ford tux. In November at the WWD/DNR CEO Summit, he joked, “My girlfriend, a Marchesa designer, Georgina Chapman, likes to call me ‘fashionably challenged,’ and that’s putting it nicely. My crimes against fashion unfortunately have been reported and photographed in the media.”

Cipriani and Nobu handled the cocktail hour, where guests nibbled on bite-size potatoes with caviar and crème fraîche, and baked taglioni with white truffle oil. For the main course, Cipriani whipped up Dover sole and veal osso buco. A live performance by the Gypsy Kings kept the crowd jumping. The fashion crowd was well-represented, thanks to Anna Wintour, Glenda Bailey, Natalia Vodianova, Margherita Missoni, Helena Christensen, Jacquetta Wheeler, Carol Hamilton, Rachel Zoe and Karolina Kurkova. Chapman, whose partner, Keren Craig, served as maid of honor, designed her own dress in what one insider described as “a stunning, pleated ivory tulle gown.” Christian Louboutin designed her shoes.

Media heavyweights Rupert Murdoch and Les Moonves also were on hand, and even former New York governor George Pataki and current Attorney General Andrew Cuomo made the cut. Of course, Hollywood did not go unrepresented: Renée Zellweger, Jennifer Lopez, Marc Anthony, Anne Hathaway and Cameron Diaz also got in on the action. Those who couldn’t make the trip — former president Bill Clinton and his wife Hillary, Sean “Diddy” Combs, George Clooney and Anthony Minghella, among others, sent their well wishes via video. Rob Marshall did that and one better. His message doubled as an intro to a live performance of singing dancers at Weinstein’s home. He explained he had choreographed their performance and rewrote the words to “He Had it Coming.”

Weinstein and Chapman kept the party rolling Sunday — hosting a celebratory brunch for family and members of their wedding party. The pair plan to duck out-of-town, but their destination is still under wraps.

TARGET NABS ROGAN: Now pitching for Target — Rogan Gregory. The Minneapolis-based chain is said to have lined up the designer as the latest addition to its seasonal collaborations. Photographer Sarah Silver reportedly shot the Rogan campaign for Target Friday in Manhattan. Her free-moving imagery seems in synch with the retailer’s action-packed ads — she studied classical and modern dance at Vasser and believes in what Henri Cartier-Bresson called “the decisive moment.”

BEYONCE SHINES: Beyoncé Knowles will add to the festive sparkle of Milan today when she launches the Emporio Armani scent, Diamonds, at Rinascente’s flagship in Piazza Duomo. Together with Giorgio Armani — who started his fashion career window dressing for the store in the Sixties — the singer will make an appearance in Rinascente’s beauty department to sign flacons of the jewel-shaped perfume for fans. Knowles, who is featured in the ad campaign for Diamonds, also will make a guest appearance on Italian MTV earlier in the afternoon.

A NEW WRAP: Hervé Léger by Max Azria will stage its first show in February during New York Fashion Week. The show, which will take place at Bryant Park on Feb. 3 at 11 a.m., will mark the first time since the mid-Nineties that the collection, originally shown in Paris, has been presented on a runway. The event also will mark the first time that an American designer (Max Azria is of French-Tunisian descent, but founded and runs his company, BCBG Max Azria Group, in Los Angeles) will produce three fashion shows for three different collections during one fashion week. In addition to Hervé Léger by Max Azria, Azria will show his contemporary collection, BCBG Max Azria, on Feb. 1 and his designer line, MaxAzria, on Feb. 4. All three shows will be in Bryant Park. “I’ve spent the last year focusing on redesigning and reinventing the brand, while staying true to the house’s heritage,” said Azria of the Léger fashion house, which he acquired in 1998.

TOPSHOP’S NEW WARES: Topshop is lining up its designer collaborations for spring. In mid-January, the store will launch capsule collections by London-based designers Jonathan Saunders and Louise Goldin. Saunders’ collection will include black and gray jersey T-shirts and dresses adorned with his signature geometric prints in turquoise and red, while Goldin’s will feature intarsia knit dresses woven in bright blues, reds and oranges. While Saunders will leave London to show his mainline collection in New York in February, a spokeswoman for Topshop said the brand still plans to sponsor his show there as part of its New Generation program. And in time for London’s own fashion week in February, Topshop will introduce a further round of capsule collections from London designers Christopher Kane, Marios Schwab, Todd Lynn and Richard Nicoll, which will arrive in stores Jan. 28.

SCHOOL TIES: It may take a village to raise a child, but it takes a student body to open a shoe boutique. On Wednesday evening, New School student (and girl-about-town) Victoria Traina hosted a party to fete her school chum and London social Davinia Wang’s footwear outpost, Edon Manor, which opened two weeks earlier. The party was brimming with Traina and Wang’s classmates, including Ryan Korban, Edon Manor’s creative director.

“We wanted the store to be like the old accessory boutiques on Bleecker Street,” Korban said, “before Bleecker Street turned into Times Square.” Indeed, the shop — which stocks shoes from Proenza Schouler, Givenchy and Valentino — occupies an otherwise sleepy street in TriBeCa. As for the store’s decor, Wang, who hails from London by way of Hong Kong, gave her schoolmate specific instructions.

“Davinia wanted it to look like a carbon copy of her family’s estate in England,” Korban explained. To that end, he furnished the space with regal accents like antique leather chairs and teal chintz curtains.

Though Edon Manor currently stocks shoes and some handbags, Wang plans to venture into hosiery and jewelry. Meanwhile, for Traina and Korban, just shoes is fine: The two are producing a film on footwear as their senior thesis.