The South Carolina-born founder and designer has grown her contemporary sportswear business at a fast clip since winning the NBC show last May. 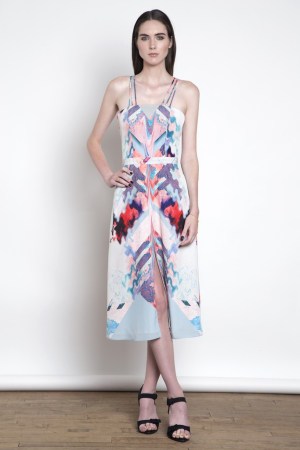 BELLS ARE RINGING: Since winning NBC’s “Fashion Star” in May, Hunter Bell has grown her contemporary ready-to-wear business at a fast clip. The South Carolina-born founder and designer officially renamed her company Hunter Bell (it was formerly known as Hunter Dixon) for the spring season. All of Bell’s garments are produced in New York City, where she is based, and retail prices range from $170 to $500. Her spring line, which features bright intricate fabrics, abstract floral prints and soft knits, will be available at 200 boutiques worldwide, as well as Nordstrom, Anthropologie, Shopbop, Revolve and her own Web site, hunterbellnyc.com.

“My experience on NBC’s ‘Fashion Star’ reenergized me and gave me the confidence I needed to make changes that would be instrumental in building my brand,” Bell told WWD. “While designing in the competition, I was under pressure to think more on a global scale and have less of a myopic viewpoint. Everything I learned has helped open up new doors from both a creative standpoint and a sales standpoint.”