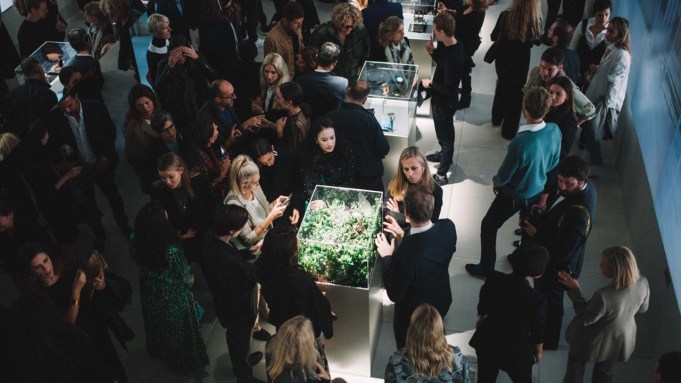 SEVEN TECHNOLOGICAL VIRTUES: The path forward in fashion has never seemed clearer than at the Google Arts & Culture lab, where groundbreaking technologies were presented at the Fashion Tech Lab’s Paris launch on Monday.

“There is a revolution happening in material science, bio- and nanotechnologies. It’s coming into our industry, which, despite producing new trends every season, hasn’t changed its technology for a century,” Fashion Tech Lab founder Miroslava Duma said.

The multinational incubator, agency and philanthropic organization aims to parlay innovation into solutions for the fashion industry in a bid to improve its environmental and social footprint, while fostering style and creativity. As Pascal Morand, executive president of the French couture federation, summarized, “intimately mixing these technological advances in fashion is fundamental.”

Serial entrepreneur Duma said an experimental lab was set to launch in 2018, to connect young talents in design with engineers and scientists to create future-proofed, problem-solving designs.

“The future is in this room and we have no other choice. This is how it’s going to be, and if it isn’t, we don’t have a future,” said Stella McCartney, as press, fellow designers and industry heavy-hitters joined the British designer and cohost Duma for a presentation of seven exhibitors offering solutions to questions such as combating plastic pollution in the sea, cruelty-free leather or garment recycling.

But it was no doomsday proclamation: “A lot of improvement can be injected now, it doesn’t have to be so innovative,” McCartney added, underscoring the idea that while the objectives of these changes were of a planet-wide scale, many of the changes themselves remained on the microscopic, or even atomic level.

“Humanity will never be the same again,” Diane von Furstenberg noted with enthusiasm, expressing pride in the participating companies, innovators and fashion houses alike, and her joy in being present at a key moment.

Take the diamonds produced by San Francisco-based producer Diamond Foundry. Chief executive officer Martin Roscheisen explained that while they were morally pure, flawless they were not, as the process re-creates the conditions leading to the natural formation of diamonds, rather than attempt to duplicate their molecular structure.

Currently, G and H color grades in SI1 to VVS2 clarities are obtained, and their price makes them sustainable at a low price point. Certification by internationally recognized organizations such as the Gemological Institute of America is possible. A 5-carat stone on display here was valued at around $100,000, a lower price point than mined diamonds with similar characteristics.

“Money is the dirtiest thing in the world,” quipped Duma as she stopped in front of a display case filled with growing mint, but she meant it literally rather than in any abstract capacity. Garments but also bills, today composed of a linen-cotton mix, imbued with the company’s peppermint extract based product by Scandinavia-based Mint Materials, would be durably imbued with odor control and antibacterial properties, lengthening their life cycle.

VitroLabs’ sample of cultured leather, a material produced from animal cells, showcased the advanced tissue engineering that finds its roots in medical uses.

Recycling garments has long posed issues due to the presence of dye and other by-products of their creation. Miami-based company Osomtex offers solutions allowing the transformation of discarded garments and textile waste into new threads without the use of water, dye or chemicals.

Livia Firth, Eco-Age a member of the FTL advisory board, said the evening truly felt like the beginning of an era she had “dared to hope for. The industry is ready to listen. 2017 is the year where everything changes.”