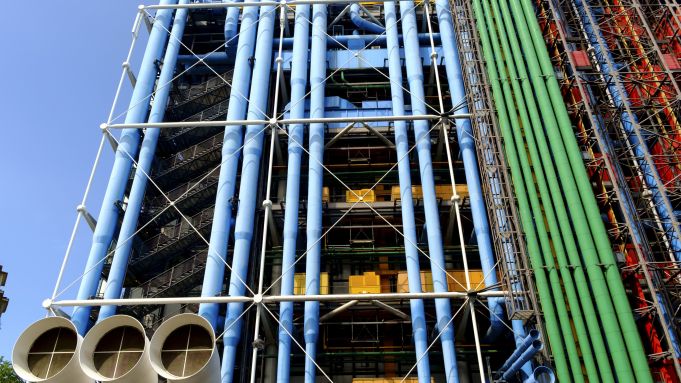 The recent heatwave in Paris was all but forgotten at the summer party organized by the Federation de la Haute Couture et de la Mode, and not only due to the venue, the Centre Pompidou’s upscale restaurant Georges and its rooftop terrace.

“I’m glad I missed it. An evening like this is great,” said Dutch designer Ronald van der Kemp, whose show on July 3 will showcase a new line of sustainable, horn eyewear. “The secret is finding ways to make [the materials] rich again. I feel that I’m really telling my story this time,” he added.

Moments later, Dior’s chief executive officer Sidney Toledano took the stage for a brief speech in which he highlighted the contribution of fashion houses to the economy and culture, noting that “it’s [his] hope that we continue developing the real creativity, the real workmanship, the real storytelling.”

“The National Museum of Modern Art has a great collection which didn’t, until now, include fashion designers,” Bernard Blistène, director of the French National Museum of Modern Art, told a crowd that included designers Mugler’s Casey Cadwallader, Glenn Martens and Rahul Mishra. “Well, with president [of the Georges-Pompidou Centre Serge] Lasvignes, we decided to open our collections to fashion designers, which is more than a simple decision. It is a statement because we consider that fashion designers are closer than we think to the greatest inventors, experimenting in quite a lot of things. So it’s time to open our collections to the greatest names in order to think that the link between design, architecture, visual art and fashion has always been stronger than we think despite the fact that we were not considering it as part of creativity. So welcome to fashion designers in the Pompidou collections.”

Pascal Morand, executive president of the federation, said “the formal decision taken by the museums was to set the principle of adding fashion designers as artists, recognizing other criteria than fashion’s dimension as an applied art. This is fashion and haute couture as artistic gesture.”

While no designers were yet announced for inclusion in the museum, Michèle Lamy, who is part of the Friends of the Centre Pompidou patron society, said the group would be organizing a party in mid-October. “Judging is difficult. As in painting, not all those who create are artists,” she added.

The announcement certainly dominated conversations for the rest of the evening, sparking passionate exchanges.

Most guests expressed delight, like Guo Pei for whom “couture is a spirit, an artistic expression for humans.” Pei prefers unfettered imagination on her runways. “To consider it solely as a business would be to lose our mission,” she said.

“Fashion is about culture and identity. So many people [today] have strong, culturally relevant ideas, which is art is about,” mused Cadwallader.

French-Chinese couturier Yiqing Yin, who had exhibited at the French Pavillion at the 2013 Venice art biennale, considered “boundaries between fine and applied arts [to be] old-fashioned and no longer having reasons to exist. We all are in service of new ways of thinking and reflecting on society, nature and humanity.”

Others, like Delhi-based Mishra, considered the announcement a gauntlet to up their game. “[Blistène] has given a big responsibility to the fashion community, the designers. Trend-driven fashion is not enough for the industry, as good as it is for business. Even a cut or an inventive look is not enough. There’s a creative bug inside you, that keeps telling you try something new, explore further, push beyond boundaries,” he said.

Pierre Kaczmarek, one-half of buzzy Parisian label Afterhomework, offered a more philosophical take. “Art is going towards something more industrial and commercial. Artists are increasingly reaching out to brands, even small ones like ours. Perhaps it is the museum that is changing, not fashion,” he said.