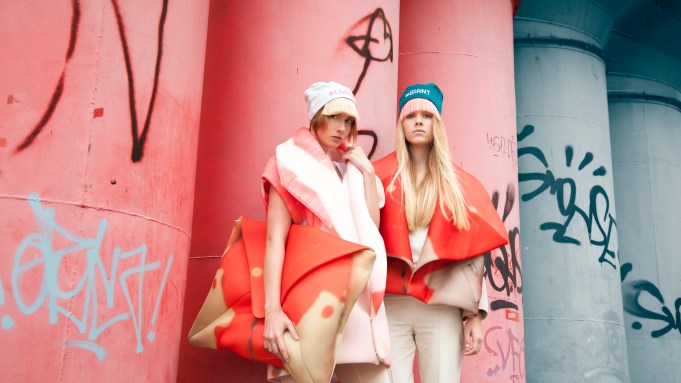 FASHION SOCIETY: The British Council and the British Fashion Council have teamed up to host a new exhibit titled “Fashion Utopia” to take place during London Fashion Week, from Feb. 19 to 23.

Located in the west wing of Somerset House — the former London Fashion Week venue — the exhibition will feature works by emerging designers from 24 countries. From Austria and Egypt to Nigeria and Slovakia, a host of designers including Nour Najem, Andrea Pojezdalova, Reem Jano, Sabry Marouf and Yeeun Park will take part in the showcase.

To pay homage to the 500th anniversary of Thomas More’s book “Utopia,” the participating designers and curators will stage fashion installations inspired by their vision of a perfect society. The exhibit will be arranged in separate galleries: 13 will represent each country, while one will display a collective installation featuring the work of designers from 11 more nations.

Highlights include Lebanon’s installation in the unifying shade of blue enhanced by lighting design. For Lagos’ installation, designers have curated pieces of clothing that make use of optical illusions and capture the power of creativity.

The participating designers will receive support from the London College of Fashion, which will offer seminars and mentoring opportunities from academics and researchers.

In addition, British label Unmade — known for fusing technology and textiles — will also collaborate with six designers on a knitwear collection.

The event is part of the public-facing program the British Fashion Council is spearheading to coincide with London Fashion Week.

The BFC will also host a ceremony on Feb. 21, where one designer and one curator will be presented with an award recognizing their creativity. The judging panel is headed by Sarah Mower, BFC’s ambassador for emerging talent.

“At a time when it often seems as if we’ve plunged into a dystopian age, it’s a liberating act to think about exactly the opposite, how we would want a utopia to look like,” said Mower. “The theme set for the fifth International Fashion Showcase will bring the optimistic visions of over 80 emerging designers of 24 countries to London — a capital known for holding up the ideas of aspiring fashion talent as pre-eminent. We expect to see the beginnings of many careers starting right here.”