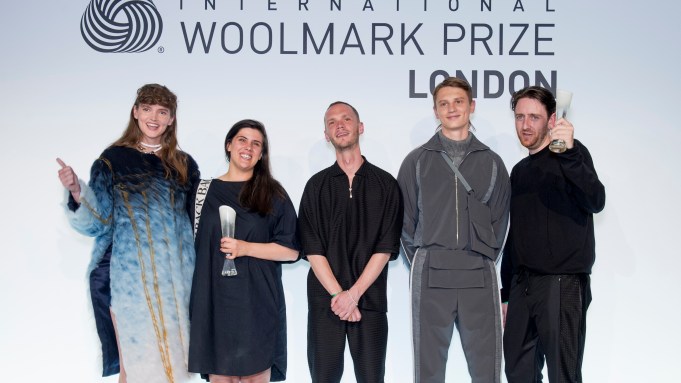 LONDON — Faustine Steinmetz and Cottweiler were chosen as finalists of the Woolmark Prize’s British Isles regional competition, and will compete for the big awards early next year.

Steinmetz won for women’s wear while Cottweiler, designed by Ben Cottrell and Matthew Dainty, scooped the award for the men’s wear. The announcement was made Tuesday night during a ceremony at the Australian High Commission here.

Each will receive 50,000 Australian dollars, or $38,000, as well as mentoring support from a global panel of experts. They will also get a Woolmark license and represent the region in the International Woolmark Prize finals that will take place early next year.

Over the next few months, the designers will develop capsule collections using merino wool that will be showcased during two upcoming Woolmark events. There will be six men’s wear and six women’s wear finalists in total.

The international winners will receive a further 100,000 Australian dollars, or $76,000, plus the opportunity to have their collections stocked at retailers including Harvey Nichols in the U.K., David Jones in Australia, Boutique 1 in the United Arab Emirates, and online through MyTheresa.com and Matchesfashion.com.

“I lost out on so many competitions last year, I started to feel like I was a terrible designer,” Steinmetz admitted. “For me, merino wool is the material I love to work with and have done so since I started out. It’s my favorite thing.”

Her design was entirely hand-felted. “I reproduced a denim jacket and hand-dyed the shades. I was inspired by paintings and the textures of the paints as seen very close up. I wanted it to feel like a Van Gogh denim jacket with little Impressionist touches.”

Steinmetz and her team used about two kilos of wool and 10 dye baths of indigo to mix all the colors, and the garment took a week to create, with five or six girls working on it. “It felt a bit like we were a low-budget couture house,” she said. “We broke about 40 felting needles in the process.”

Cottrell and Dainty of Cottweiler confessed they were newcomers to merino. “It was really exciting to re-imagine what we do in a completely different fabric,” said Cottrell.

For their design, a signature Cottweiler tracksuit, they bonded 95 percent merino wool to a nylon merino mix “so it gives the impression of a nylon tracksuit but the reverse is all merino,” he added. “The natural properties of merino – it’s breathable, waterproof and windproof – are just as exciting as the nylons we’re used to.”

“We wanted to change people’s perceptions about the use of the fabric and wanted to present our signature look to a new audience,” added Dainty. “We managed to make a full look out of merino that doesn’t look as if it’s made out of merino.”

“We got all the information about the different designers on an iPad and had to rate every single category that these guys had been asked to look at, with a number from one to five,” said Richardson, adding that each designer had an allocated two-minute slot in which to pitch.

“Cottweiler showed us innovation in a very quiet, subdued, ‘fashion’ way, keeping it very true to their brand ethos, and delivered something that was very modern,” he said. Of Steinmetz, he said: “The potential of that brand and what it can do with this prize, and take it to the next level, the way she talked about craft, was inspirational.”

Ilincic agreed. “Faustine showed incredible creativity and an almost couture-like technique with her approach to the look and the wool fiber. There was scalability from something that was more artistic and experimental to something that is commercial, which was one of the great points of her collection.”