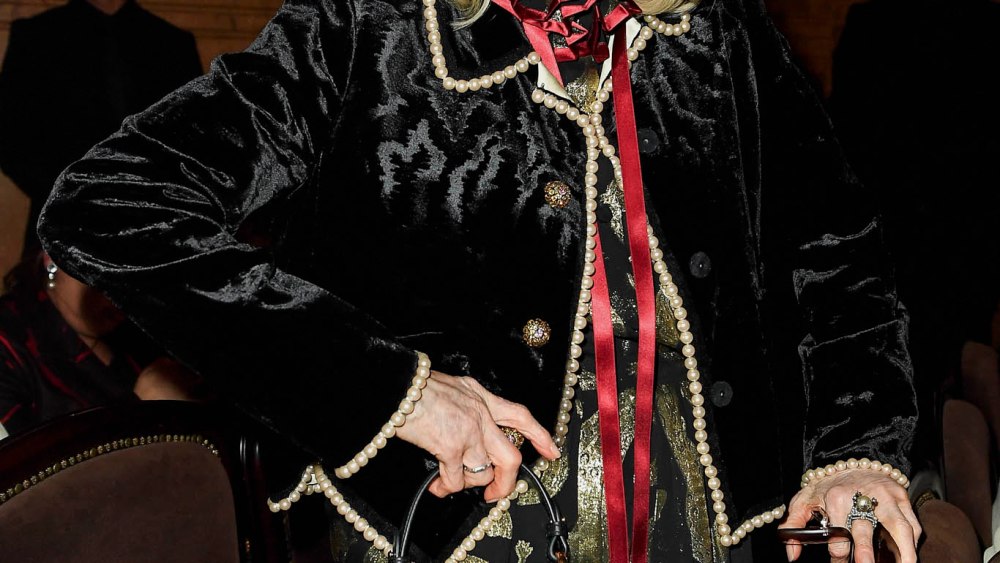 PICK AND MIX: Alessandro Michele assembled an eclectic cast of divas and misfits for his one-off Gucci show in Paris at the legendary theater Le Palace, home to France’s equivalent of Studio 54 in the late Seventies.

Leading the Hollywood contingent was Faye Dunaway, who stars in ads for the Italian brand’s Sylvie bag. The Oscar-winning actress hugged a very pregnant Soko, who plays her daughter in the campaign, before taking her seat in the stalls. Though she has influenced many designers, the 77-year-old was honored that Michele picked her.

“I couldn’t believe that he asked me to do it,” she said. “In fashion, he is the man to meet right now. I mean, the kids love him, they keep coming in, and his line and his garments are really wonderful, so I’m very happy with it and the photographs were great.”

The star of classic films like “Bonnie and Clyde” said she was flattered to be considered a style icon.

“I feel wonderful about it, I really do. You work very hard every step of the way with the designers, you know, from [‘Bonnie and Clyde’ costume designer] Theadora Van Runkle to ‘Thomas Crown,’ all of the films I’ve done, and it’s very nice to be recognized and for it to be an inspiration to all of these people,” she said.

Behind her, editors peered through binoculars to identify the VIPs in the boxes. François-Henri Pinault, the head of Gucci’s parent company Kering, was flanked by his wife Salma Hayek and diminutive Belgian director Agnès Varda. Gucci ceo Marco Bizzarri sat with his childhood friend, renowned Italian chef Massimo Bottura.

Amanda Lear recalled performing at Le Palace 40 years earlier to the day, on what she remembered as its opening night — though accounts of the party-loving era predictably differ. The club’s official history says it opened on March 1, 1978, and Grace Jones claims in her memoir that she performed that day.

“I inaugurated this place. I was the first,” Lear said emphatically. “The paint wasn’t dry, there were no dressing rooms. Fabrice Emaer came to get me in Italy and told me he was doing a kind of Studio 54 in Paris. So there were lasers everywhere and I sang here. There were 5,000 people blocking the street — all of Paris was here.”

Varda apparently wasn’t one of them. “I don’t dance and I don’t drink,” she said with a shrug. Though the New Wave director wore Gucci to accept her honorary Oscar from Angelina Jolie last year, she has little contact with the fashion industry, noting that Michele is an exception.

“I found him very handsome, very intelligent, very cultivated. I enjoyed spending half-an-hour with him. He spoiled me and I sent him a photograph of potatoes,” she said. Come again? “Because I photograph exceptional potatoes,” she explained. “They are heart-shaped.”

So was she to credit for Michele sending guests a sack of flower bulbs by way of an invitation? “That’s a brilliant idea, because the idea of nature is so far removed from fashion that it was a sort of extraordinary reconciliation,” she marveled. “Everyone is going to plant them.”

The 90-year-old is busy working on the follow-up to “Faces Places,” which was nominated for the Oscar for best documentary at the 2018 Academy Awards. “I’m doing a documentary about my work. It’s a sort of master class, because it’s time to leave behind a few messages,” she said.

In the darkened orchestra section, a woman in a gold-sequined dress stood out. It turned out to be Molly Lewis, known professionally as Whistler’s Sista, who can whistle tunes ranging from the Queen of the Night aria in Mozart’s “Magic Flute” to Nicki Minaj’s “Truffle Butter.”

“It’s very niche and there aren’t many whistlers in the world, so it’s not even something I knew existed in a wider sense until I was in my late teens and I kind of found out that competitions were a thing,” she said.

Michele, apparently, is a fan. “I got an e-mail — very random,” said the Australian performer, who plans to play two shows while in Paris. “I’ve never been to a fashion show. This is all very new for me.” A glance at her videos on YouTube confirms the obvious: Michele has an eye for hidden genius.