It’s a match made in sunny Los Angeles.

Fear of God designer Jerry Lorenzo is launching his first extension into eyewear, in collaboration with indie optical brand Barton Perreira, which has previously partnered with James Bond 007 and Robert Geller.

The Fear of God rectangular acetate frame is inspired by the Barton Perreira optical glasses that Lorenzo has been wearing himself for years. The $510 style will come in two sizes, and five earth-tone hues with light gradient wash lenses. They are available starting June 19 at BartonPerreira.com, FearofGod.com and in Barton Perreira stores.

The match came about last spring after Patty Perreira noticed Lorenzo on Instagram wearing the brand’s classic “Woody” and “Joe” frames. “I was fanning out because I dig his vibe,” the Barton Perreria designer said of his classic but modern aesthetic. She reached out with the idea of partnering and got a message back within 24 hours.

“Someone like me who is so particular with how I present myself, it was hard to find a pair of glasses that were unopinionated — and I say that in the best way,” said Lorenzo, who has been loyal to the brand since he started wearing glasses in his late 20s. “They are my go-to glasses, they sit on my face perfectly, and you get those weird comments, like ‘Those glasses are nice, I didn’t even know they were there.’ That’s kinda what I’m going for. In design, one of the hardest things to land is simplicity. One of hardest things to create are solutions that aren’t obtrusive.” 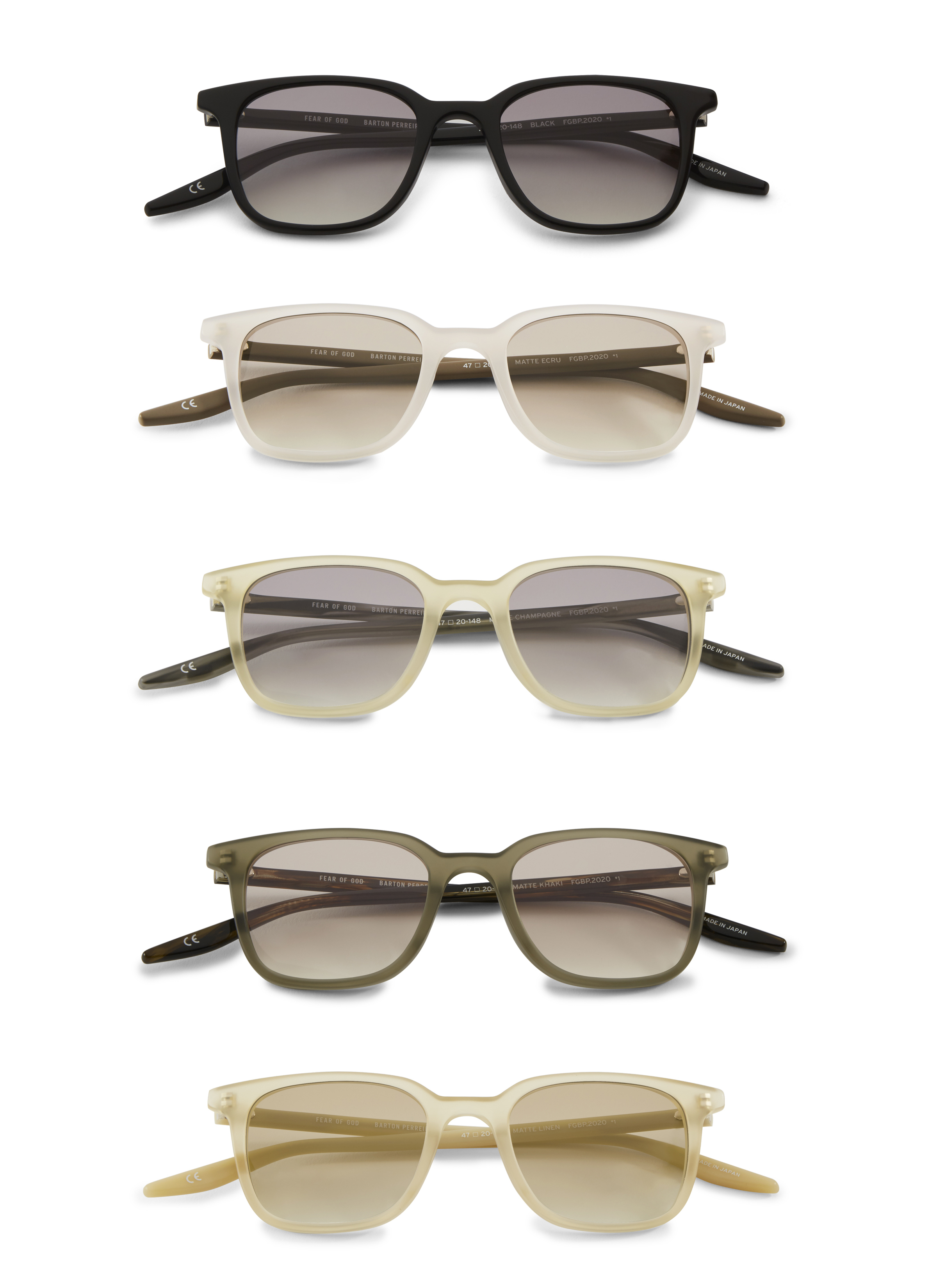 To create his own Fear of God frames, Lorenzo spent hours poring over Perreira’s vintage eyewear collection, and offered ideas about color palette, and the interplay between matte acetate on the front of the frames and gloss on the sides. “I love where we landed. It’s an optical that doubles as a sunglass and kinda feels like both,” he said.

Lorenzo has already sneaked a few frames into his latest Zegna x Fear of God shoot: “It’s such a beautiful, digestible shape and it looks good on everyone.” He’s also going full steam ahead on his next clothing collections, doing fittings for both his Essentials and main lines, which will be released in the next six weeks digitally, which has always been the brand’s outsider approach.

Fear of God recently joined with a handful of other designers to release a $100 George Floyd charity T-shirt to raise funds for the Giana Floyd Fund, in support of George Floyd’s six-year-old daughter following his murder by the Minneapolis police. “We took some bullets for trying to do something good,” Lorenzo said of the shirts, which sold out a limited edition of 1,000 in eight seconds on social media, with all proceeds going to the fund. “Whatever you do now is gong to be questioned, but you only have your intent and your heart.…We’ve never been numb to what’s happening to those who are marginalized. And being black, I’m part of that group of people. I feel comfortable in the way we’re operating during this time.”

Asked how this historical moment of social change has influenced his design process, he said, “I think it’s irresponsible not to recognize the new times we’re in. But our brand has always been known to modernize American classics and that approach, similar to Barton Perreira’s, is a timeless approach, and relevant no matter what’s happening. That being said, when it comes down to creative and messaging around the collection and the story, some of those things require more consideration, some edits and pivots.…I’m happy with what we’ve been working on over the last eight years. Even though we’ve been trapped in this hype stigma, we’re fighting to be a brand playing for forever, we’re fighting to become the next Ralph Lauren. Our approach is a long-term approach, and we’re ready for the ups and downs that come our way and are not going to let them alter or change our point of view.”