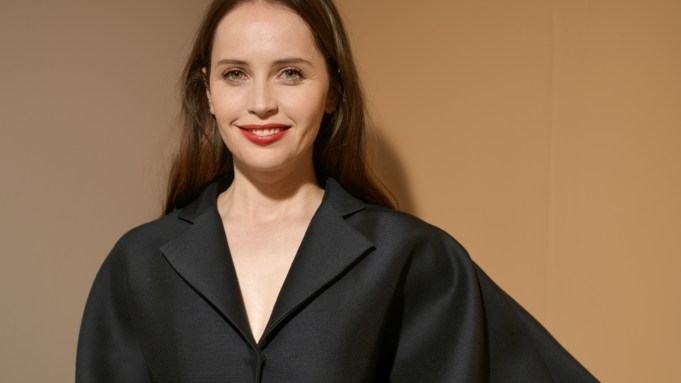 ROLL UP, ROLL UP: One of the guests at the circus tent setting for the Christian Dior show Monday afternoon felt right at home. “Rogue One” actress Felicity Jones had just a week ago wrapped filming “The Aeronauts,” in which she plays a circus performer and hot air balloon pilot.

“It’s a real magical adventure story, so this is totally fitting,” she said. Even the acrobatics seen during the show were nothing to scare the rising performer — the role saw her shooting in a hot air balloon.

“It’s pretty amazing, actually, because you go up so gently it’s not quite as scary as you think it’s going to be because it’s a slow incline, but then suddenly you’re 2,000 feet up looking out of the balloon and thinking, ‘Wow, it is actually quite high up here.’”

Maria Grazia Chiuri had called on acrobatic troupe Mimbre to perform as part of the circus-inspired show, framing the models as they walked the runway. “She wanted Mimbre to come with a team of all-female acrobats,” Lina Johansson, artistic director and cofounder of the London-based company, who began work choreographing the project with 18 performers in November, explained backstage before the show.

“Maria Grazia is so inspiring in how she’s celebrating female artists, female role models, [she] put these strong women on the runway with the models, celebrating women of all shapes and sizes,” Johansson said.

While Mimbre had never worked on a fashion show before, it specializes in taking its performances to unconventional settings. “We like putting them where people don’t expect to see it, and in that way it was very similar,” she said of the project.

Her starting point for the creation was the setting of the Musée Rodin, namely the artist’s sculptures.

“It’s all about movement, the muscles popping out of the stone and the definition of muscle and the celebration of bodies, and also so many of his sculptures are close to acrobatic,” she explained.

Dior created the black-and-white costumes for the performers with very different specifications from the couture pieces they framed, as each needed to be designed around the acrobat’s specific role — some needed their arms free, others their legs, and it was essential that the fabric used was not too slippery.

“For each acrobat, we worked out their logistical needs, and then the Dior team designed costumes around that,” Johansson said.

“It’s always good to see acrobats,” quipped a deadpan Kristin Scott Thomas before the show, although she’s not into acrobatics herself. “Not on purpose at least,” she said.

Scott Thomas has just wrapped “Military Wives,” about a choir for the wives of soldiers posted to Afghanistan in 2010, set in Yorkshire. “I got to do lots of really bad singing, and I enjoyed it enormously, I love doing comedy,” she added.

Kat Graham, who joined other front-row guests including Monica Bellucci and Eva Herzigova, said she has two movies out shortly, starring alongside Ethan Hawke, Terrence Howard and Wesley Snipes in “Cut Throat City” and with John Travolta in “The Poison Rose.”