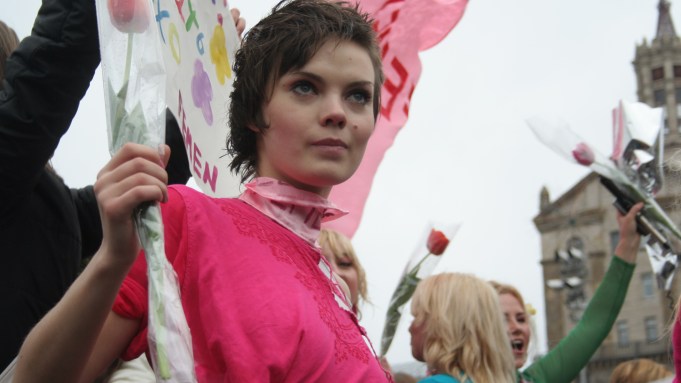 PARIS — Oksana Shachko, a founding member of Femen, was found dead in her Paris apartment, the web site of the feminist protest organization said Tuesday.

“RIP. The most fearless and vulnerable Oksana Shachko has left us,” said a post by the organization, noting that her body was found Monday in her apartment in Paris. Police are investigating the cause of death, it also said, but French officials declined to comment.

Femen protesters are known for grabbing attention by baring their breasts when staging protests. In 2013, two of the topless protesters briefly interrupted a Nina Ricci show, with “models don’t go to brothel” and “fashion dictaterror” written across their chests. At the time, the organization said in a statement that it was protesting against an industry that profited from women who “sacrifice their lives and their health for this masculine business.”

The group, which was initially formed in the Ukraine before relocating to Paris, has also targeted religious and political figures, rushing toward German Chancellor Angela Merkel and Russian President Vladimir Putin as they toured an industrial fair in 2013, and later appearing topless in Notre Dame in 2015, with messages including “pope no more.”

“May you never forget her…forever in the history of feminism and women’s fight for our and human rights,” the group said in an Instagram post.

Femen cofounder Inna Shevchenko said in an Instagram post to Schachko: “We stood up together on [Independence] Square in Kiev, waving flags into the sky and shouting slogans into the silence; we survived in the Belarus forest together, after being tortured and we marched the streets of Paris together, while forming new bataillons of female fighters.”