Fashion house toasted the bag at Maxfield in Los Angeles with a “Baguettemania” pop-up shop. 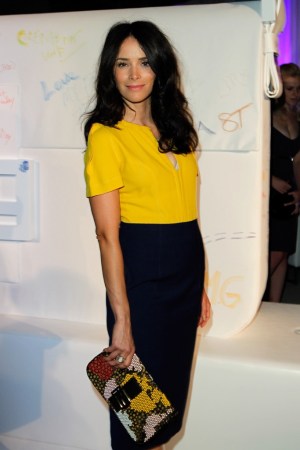 PURSE POP: Fendi celebrated the 15-year anniversary of the Baguette bag on Wednesday night at Maxfield in Los Angeles with a “Baguettemania” pop-up shop (the boutique’s first ever pop-up) and three bags commissioned from artists Chaz Bojorquez, Kenny Scharf and Pae White and curated by Jeffrey Deitch. “I met [Maxfield owner] Tommy Perse through friends many years ago when I came to L.A.,” said Silvia Venturini Fendi, who created the bag. “We became great friends, so it made sense for us to celebrate here.”

Of the Baguette’s staying power, Fendi said, “We are very fortunate that it has a timeless look that women love.” Guests who brought their own Baguette along, like stylist Jennifer Rade, or bought one on-site, like Irena Medavoy, were given a matching mirror to put inside. Still others were dressed by the house, including Lady Victoria Hervey, Lydia Hearst, Katerina Graham and Abigail Spencer, whose time for dress-up was short-lived. “My son goes back to pre-school tomorrow so I’ll have to give up the dress,” she said.

Elsewhere, Lauren Taschen made her own fashion statement with a “Team Jeffery” T-shirt. Apparently an anonymous donor sent a box of the shirts over to MOCA in support of the embattled museum director. Deitch even posed with women wearing them in front of the giant plaster Baguette in the courtyard.