Brazilian artists Leda Catunda, Nina Pandolfo and Isay Weinfeld were among the guests. 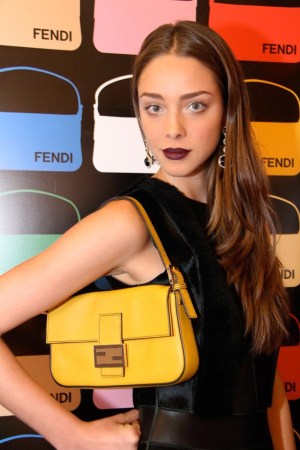 FENDI FETE: Fendi hosted a party Tuesday night for more than 200 guests in São Paulo to celebrate the opening of its store there. “Now I have another reason to come visit more often,” said Silvia Fendi, the label’s creative director of accessories and men’s wear, who had lived in Brazil in the Eighties and traveled extensively there (to cities such as Rio de Janeiro, Búzios, Bahia and Florianópolis) but was only just visiting São Paulo for the first time.

Other guests included Brazilian artists Leda Catunda, Nina Pandolfo and Isay Weinfeld, each of whom collaborated on one-of-a-kind Fendi bags that are on display in the month-long “Baguettemania” exhibition, open to the public.

During the store’s opening fete, five of the bags were sold via silent auction, with proceeds benefiting the charity Verde Escola, which promotes environmental awareness. The starting bid was 4,000 Brazilian reals, or $1,880 at current exchange. Catunda’s Selvagem (“wild”) model was the most sought after. Dyed green and decorated with paintings of Brazilian fauna, Catunda’s Baguette was purposely nationalist.

“I wanted to bring to the piece the stereotype of Brazil, with tropical color and animals such as the jaguar,” said the artist.

Other guests included Brazilian photographers, models, fashion TV show presenters and socialites, some of whom sported Fendi fur coats and stoles despite the balmy, 64-degree weather.