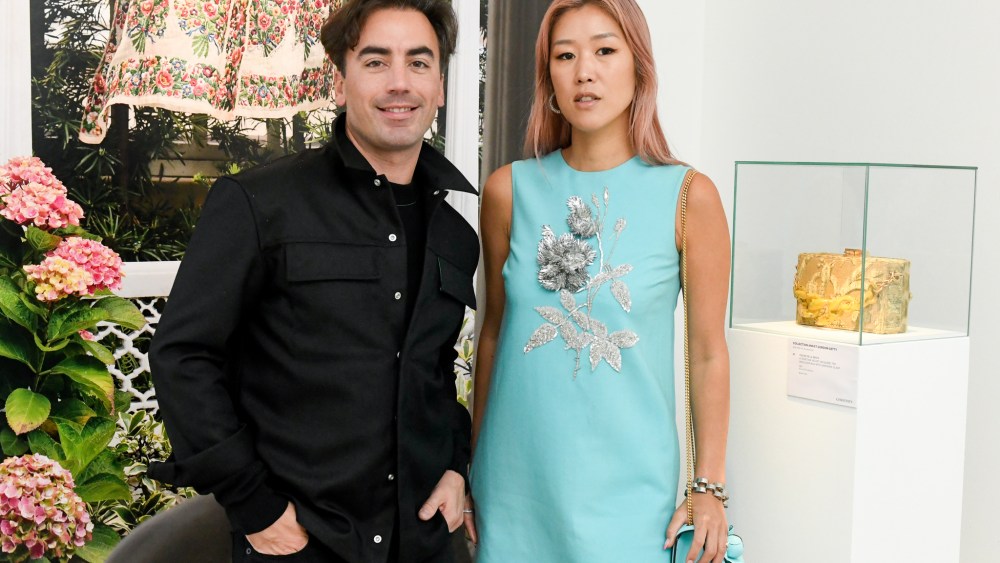 Fernando Garcia and Laura Kim dropped into Christie’s in Paris on Tuesday night to chat about their connection to the late tastemaker Ann Getty, who wore Oscar de la Renta for years.

As part of “The Ann & Gordon Getty Collection” hitting the block Oct. 10 to 24 in New York, the designers were commissioned by the auction house to upcycle some of Ann Getty’s treasured textiles, creating 10 one-of-a-kind styles and 10 handbags, which will be part of the sale encompassing 1,500 works from the couple’s San Francisco home.

“Your eye doesn’t sit still in an Ann Getty interior, it flutters across the surface. She was obsessed with textiles, she would buy bolts of 18th-century fabrics, tapestries from central Asia — and she used them. She wasn’t afraid to cover a stool with 18th-century fabric. She said they had life but didn’t have their whole life,” said Jonathan Rendell, deputy chairman of Christie’s Americas.

The ODLR collaboration kicked off in May when Ivy Getty wore a custom de la Renta gown made from a lace tablecloth in the estate to this year’s Met Gala.

“It was almost like going to a museum, it’s something you don’t see in stores anymore,” Kim said of the textiles, during a panel discussion that culminated in a Champagne reception and preview of some of the sale’s treasures, including paintings by Edgar Degas, Mary Cassatt and Bernard Bolotto.

“It was fitting to see these were in the vernacular of what we’d started developing for the brand,” said Garcia, pointing out the similarity between Getty’s 17th-century Italian Flora and Fauna threadwork embroidery they used on a cocktail dress for the collaboration, and the pressed flower embroidery on Taylor Swift’s Oscar de la Renta 2021 Grammys dress.

“I think she’d be incredibly happy, the idea of costume was very her,” Rendell said of the patron, who died in 2020, noting her taste for JAR jewelry and Bevilacqua textiles from Venice, which she’d have made into coats.

The designers were so inspired, this might not be the end of their Getty dealings. “It’s a continuing story,” Garcia said.