Weeks away from the FGI Rising Star awards at Cipriani 42nd Street, nominees in eight categories discussed how they keep calm at a warm-up party at Saks Fifth Avenue. 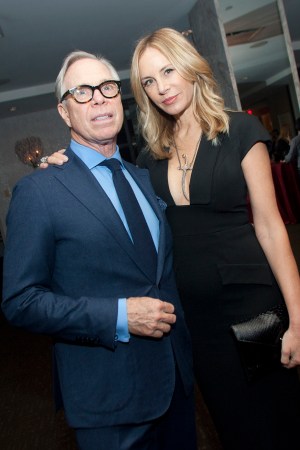 A Look at Queen Elizabeth’s Most Extravagant Tiaras

Given the struggles retailers are dealing with — the digital impact, skittish consumers and peculiar weather patterns, it’s not surprising that a few of this year’s FGI Rising Star nominees are being proactive about trying to will their own success.

As one of seven contenders for the accessories award, Dee Ocleppo Hilfiger said, “I’m very happy just to be nominated. I don’t think that I’m going to win. I’m more concerned about the day-to-day things in my business that are happening. Awards are nice but at the end of the day it’s about the balance sheet. If my balance sheet is good, that to me is like winning an award, especially in today’s climate. It’s tough out there — very, very tough.”

At the Saks Fifth Avenue party for some moral support, Tommy Hilfiger hadn’t advised his wife about dealing with pre-awards anticipation. “My advice to her is from a business side usually —stay unique and persevere.”

The designer also doles out some wisdom to his daughter Elizabeth, a RISD grad who is now learning the ropes in Los Angeles before she starts her own company. The budding designer also has the ear of her godfather Silas Chou.

FGI’s president Margaret Hayes told the finalists in eight categories “to think big. Think the way that Walt Disney always thought. He was an inspiration for generations of talented innovators. He said, ‘If you can dream it, you can do it.'”

The Fashion Group International is gearing up for its 19th annual Rising Star Awards at Cipriani 42nd Street on Jan. 28.

As a women’s ready-to-wear nominee, Kempner’s Meggie Kempner said that this year she started meditating every day, whereas one of her competitors Ji Oh relies on Pilates or boxing for a morning workout. “I don’t meditate but punching is really good. It feels amazing. It kind of changes your view and puts you in a different space,” Oh said. “You sleep better at night too.”

Men’s wear nominees Rochambeau’s Laurence Chandler and Joshua Cooper said they often resort to a game of rock, paper, scissors, when they disagree about design decisions. “We try to keep it a little playful. It can get a little uptight in the fashion world sometimes. We like to remember our roots and where we come from.” Chandler said.

Like Oh, accessories designer Yliana Yepez is a two-time nominee. “For the first year of the company, it was all about what the market needs, what people want me to do, what-about-the-styles-that-weren’t-in-the-collection, and now it’s about what I want to do. I like colors and I’m Latin, and I’m into tropics, so this is what I am,” Yepez said, gesturing toward the vivid toucan image on her clutch.

Her fellow nominee Freida Rothman was equally confident. “It’s all going to be good. I’m always positive. I think big. I’ve been in business for over four years. My jewelry is sold in more than 55 Nordstrom stores, as well as Bloomingdale’s and 300 boutique stores across the country.” she said. “And I’m a mom of four — that’s my biggest achievement.”