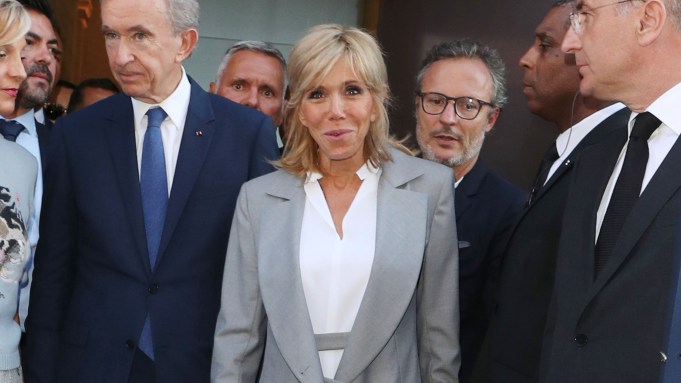 J’ADORE DIOR: Flanked by Maria Grazia Chiuri and the Arnault clan, First Lady Brigitte Macron was among the first through the gates for the drum-rolled opening of the exhibition, “Christian Dior, Couturier du Rêve,” at Les Arts Décoratifs on Monday night, marking the brand’s 70th anniversary. A glittering flow of friends of the house were in tow, many of whom had attended the brand’s couture show earlier in the day, including Jennifer Lawrence, Laetitia Casta, Cara Delevingne, Robert Pattinson and Bella Hadid.

Nadja Swarovski was also among the first in. “I was just admiring this photo of Queen Elizabeth II and then, suddenly, there’s the actual dress,” she said. “I get goose bumps every time I walk past the jewelry. Watch this space — we’re inspired to create a new jewelry collection.”

Entering the garden party after a whirlwind tour of the show, a similarly enchanted Natalie Portman shared her highlights. “There’s this section where pieces have been organized into colors, it’s incredibly beautiful,” said the actress, who was standing just yards away from a vegetal re-creation of a spring 2017 couture gown she will wear in the next Miss Dior campaign, due for release in September. A row of topiary sculptures had also been shaped into the form of classic Dior dresses.

“It’s classic, timeless, everlasting,” said Winnie Harlow, emerging into the sunshine and taking in the scene. “Oh my gosh, it’s so beautiful. You know what this reminds me of, actually, the engagement party scene in ‘The Princess Diaries.’ Very regal.”

In a nostalgic mood, Bianca Jagger shared her favorite Dior piece from her own wardrobe: “A wonderful pale, pale pink ballgown that Marc Bohan made for me that I wore to the wedding of Loulou de la Falaise. I went with Yves Saint Laurent and he put ferns on the dress; there’s a photograph of him doing it.”

The activist was just back from Germany where she had spoken at a conference organized by Chancellor Angela Merkel. “I spoke about rape as a weapon of war….I spoke about my experiences in Bosnia….Dior has sponsored a number of Arts for Human Rights events held by the Bianca Jagger Human Rights Foundation, and Maria Grazia Chiuri is very committed to gender equality. She is signing a pledge to achieve gender equality for women, that’s the reason I’m here.”

Sampling one of the cocktails, Louis-Marie de Castelbajac revealed he has taken over the artistic direction of one of the oldest producers of workwear in France, Lafont. “It’s just the beginning, but the aim is to put in place a structure to create the French Levi’s. The idea is to create timeless pieces,” he said, adding that he may unveil the first collection at Paris Fashion Week in October.

Bernard Arnault, who gave a brief speech in the garden, quipped that the first Dior exhibition held at Les Arts Décoratifs that he was involved in took place 30 years ago, “which shows our age, Sidney Toledano [president and chief executive officer, Christian Dior Couture] and I.”

“The exhibition shows that, beyond being a couturier, Monsieur Dior was a true artist. But what’s even more impressive still is that, using his own name, he managed to create a house that, even 70 years after his death, is possibly the most well-known French brand in the world. That his mother insisted that he not use his own name should he ever mount a business is rather amusing,” added Arnault.

Paris Mayor Anne Hidalgo in her speech saluted the “love story between Paris and Dior,” as a house that has managed to keep its “prized” métiers and know-how in France. She also thanked the brand for its support in the city’s bid for the 2024 Summer Olympics, saying: “I wake up and I go to sleep with one objective: To win the games for Paris and France.”

Mingling with guests, Toledano said he was relieved the weather turned sunny just in time for the house’s outdoor couture show and the Les Arts Décoratifs garden party. “This is Monsieur Dior — you can say ‘thank you’ to him. He’s taking care of us, I think,” he said, pointing at the sky, in a nod to the house’s famously superstitious founder.

Toledano said it was likely the exhibition, which was three years in the making, would travel overseas after its Paris run. “I think yes. For the moment, we’re here until January and we will see, but I think it’s worth finding a big place to do it,” he said.

As for the budget for the show, rumored to run into the double-digit millions, he demurred with a smile. “I tell you, when things are so good, you forget the price. You have to give all these talented people the means to do it. You cannot do it without an investment, but tonight I feel OK.”