The first lady wore a Dior coat dress for the commemoration ceremonies to mark the 75th anniversary of the D-Day landings.

After commemorating the 75th anniversary of D-Day in Portsmouth, England, on Wednesday, President Donald Trump and First Lady Melania Trump made their way to France for today’s ceremony marking the Normandy landings. Joining French President Emmanuel Macron and his wife, Brigitte, the Trumps paid tribute to service members from both countries who battled against Nazi soldiers in World War II. After the commemorative ceremony, including speeches by both of the presidents, and a viewing at the Normandy American Cemetery, there was a military fly-over at Omaha Beach. POTUS was then off to Calvados in France for a working lunch and bilateral meeting with Macron.

Given the pageantry that has been integral to the Trumps’ European trip, it is not surprising that FLOTUS suited up in primarily refined looks in subtle colors. For the second time this week, she chose Dior — in this case a black coat dress worn with Roger Vivier shoes with signature buckles for today’s tribute. FLOTUS is such as fan of Dior’s artistic director for women’s Maria Grazia Chiuri that she also wore custom Dior to Monday’s white-tie dinner at Buckingham Palace. 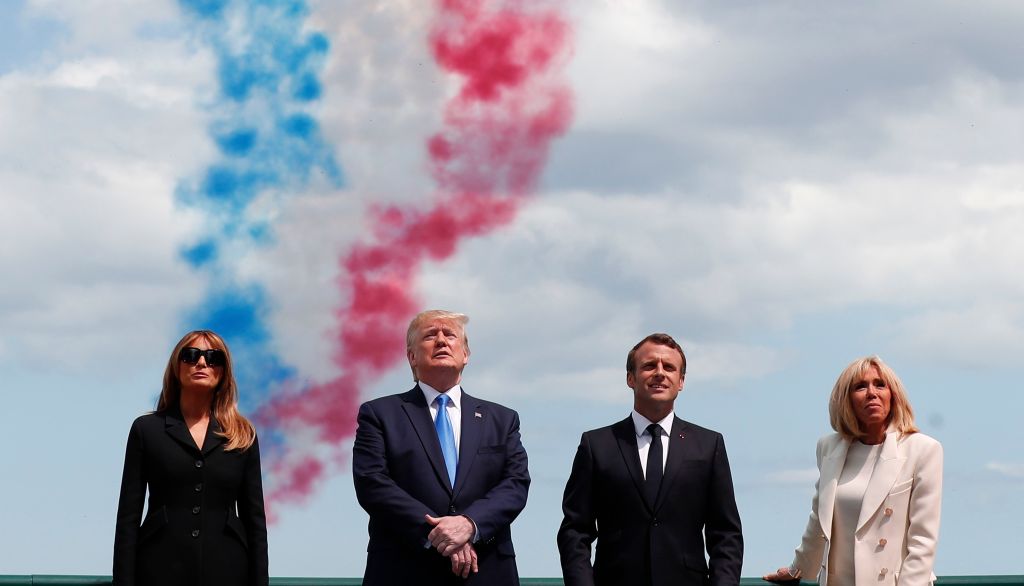 While politics are, of course, foremost during this trip, Melania Trump made sure that fashion had an important role as well. From start to finish (although the trip is not yet officially over), the first lady showed a different kind of diplomacy. En route to Air Force One for Sunday’s departure for London, she wore a Gucci twill dress imprinted with images of Big Ben and London’s Parliament Building. After arriving at Stansted International Airport in a Michael Kors suit and a printed Burberry blouse, she later changed to meet Queen Elizabeth II in a custom Dolce & Gabbana dress with a hat designed by her stylist Hervé Pierre. Dinner at the palace called for the aforementioned Dior gown, and Tuesday’s trip to 10 Downing Street was reason for a New Look-inspired Celine coat dress with a black Hermès Birkin crocodile bag. For hosting duties at Winfield House Tuesday night, FLOTUS wore a dramatic red Givenchy gown by British designer Clare Waight Keller. She wore an ivory-colored Philip Treacy hat and another coat dress from The Row’s Mary-Kate and Ashley Olsen for Wednesday’s D-Day commemorative services in Portsmouth.

While today’s event in Normandy closes out the official appearances for what has been a busy week, the Trumps will spend a second night in Ireland at the Trump golf resort in Doonbeg, before returning home to the Beltway Friday. Trump tried to convince Irish Prime Minister Leo Varadkar to hold their Wednesday meeting at the resort as well, but the Irish government declined. Clearly it’s an effort by Trump to raise the profile of the resort — it’s reportedly losing $1 million a year.