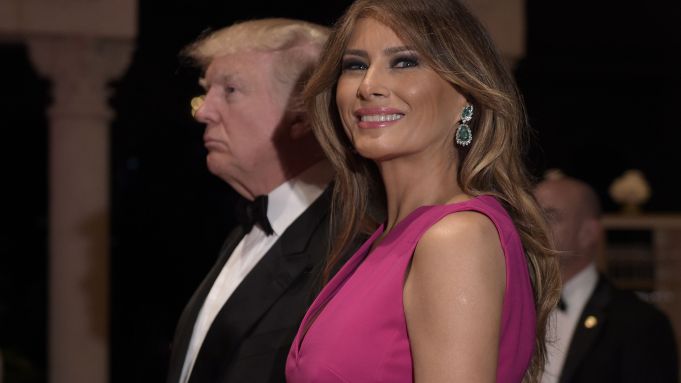 After making her inaugural wardrobe a celebration of American fashion, for Saturday night’s Red Cross Ball at the Mar-a-Lago Club in Palm Beach, Fla., First Lady Melania Trump wore a vibrant gown from Dior, finishing her look with emerald and diamond earrings and ring. The curvaceous yet unfettered gown played to Trump’s recent penchant for simple lines, while indicating her intention to continue to incorporate European clothes into her wardrobe as she did during the campaign. Conversely, the hot pink tone proved something of a departure for her, as recently Trump has favored neutral tones, particularly for evening. The inaugural ball gown she codesigned with Hervé Pierre was white, and the crystal-encrusted Reem Acra dress she wore to the Union Station dinner the night before the inauguration, muted gold. Trump did famously exhibit a penchant for color by day at the inauguration, when she wore a sky blue double-face cashmere coat and dress by Ralph Lauren.

Her sirenlike gown was leagues away from the drabber shades popular in 1881 when Clara Barton and a circle of friends founded the American Red Cross. FLOTUS’ color choice was similar to Pink Yarrow, one of Pantone’s Top 10 colors for women and men for spring 2017. Last fall, the shade was described by Lee Eiseman, the executive director of Pantone’s Color Institute as “festive and visible. Put it in a garment and you’re always going to get compliments.”

The protesters that trail the President’s moves from one place to the next might think otherwise. And the same might be said of many attendees at the women’s marches all around the world who wore a similar hot pink. And then there are others who would associate the pink with the Gucci pussy bow blouse Trump wore last fall, which Vanity Fair noted had a feminist history.