FLOTUS did not respond when asked how the impeachment inquiry was affecting her and her family, according to a pool report.

FLOTUS turned up in a Max Mara ensemble — a mauve pantsuit, a brown crewneck sweater and brown pumps. Her appearance was just one day shy of the one-year anniversary of President Donald Trump’s signing of the SUPPORT for Patients and Communities Act. During her brief speech before members of Congress, the First Lady noted that many of the policies in the SUPPORT Act “align directly” with her “Be Best” initiative, according to a pool report.

Carrying a coordinating mauve leather briefcase, FLOTUS did not respond, when asked “How is the impeachment inquiry affecting you and your family?” according to the pool report.

“Neonatal Abstinence Syndrome or NAS — is an area I have focused on and this Act provides support to mothers and their infants born with NAS. Because of the SUPPORT Act, we are able to look at ways to reduce opioid use during pregnancy and recognize early childhood issues related to substance abuse,” she said. “This bill also establishes better ways to dispose of unused drugs. We can help reduce the amounts of opioids in our communities by properly disposing of any unused medications. This Saturday we have an opportunity to do just that through National Drug Takeback day.  I encourage everyone to return or properly dispose any unused opioids in your homes.”

FLOTUS continued, “I have seen the devastating effects that this crisis has on families and children. This is why the SUPPORT act is so important. It provides the necessary tools to fight this crisis,” according to the pool report. 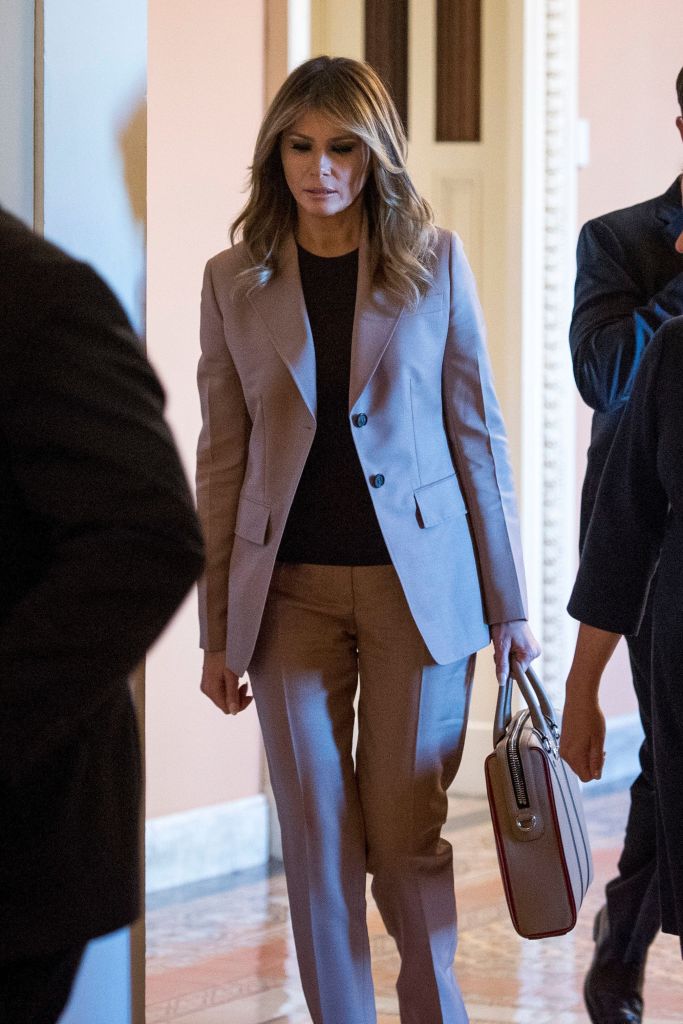 President Trump’s senior adviser Kellyanne Conway, who is known to be a Saks Fifth Avenue shopper, wore kelly green. The pool report noted that Major League Baseball will run the Drug Enforcement Administration’s ad for “World Take Back Day,” during Friday’s World Series game between the Houston Astros and the Washington Nationals. Fox Sports is televising the World Series. The national Prescription Drug Take Back Day is slated for Oct. 26 and is organized to dispose of unused or expired prescription drugs. Vaping devices and cartridges — another issue FLOTUS has rallied against — will also be accepted at drop-off locations. Prescription drugs were misused by 9.9 million Americans, according to the 2018 National Survey on Drug Use and Health.

Fans and followers of U.S. House Speaker Nancy Pelosi may recognize Max Mara as the Italian label that made the orange coat she wore for a West Wing meeting with President Trump and Senate Minority Leader Chuck Schumer in December. To appease consumers’ demand, the company reissued the fall 2012 coat in March in stores and online. The “fire coat” was the catalyst for Max Mara creative director Ian Griffiths’ fall 2019 collection, which he described to WWD as “a thorough analysis of how clothes empower.”