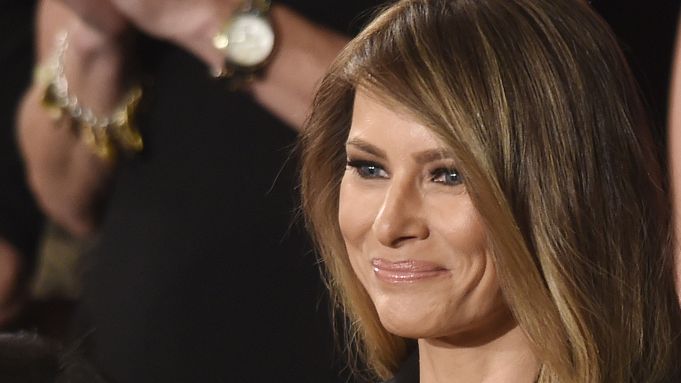 DOUBLED EFFORTS: While President Trump addressed the joint session of Congress Tuesday night, First Lady Melania Trump caught every last word from the House balcony. CNN reported that she was expected to be joined in the Commander in Chief’s designated box by relatives of people who had been killed by undocumented immigrants, in order to underscore one of Trump’s key issues.

Taking an understated tack for her husband’s first address to a joint session of Congress, the First Lady wore a black embroidered Michael Kors suit with a wide belt from the spring collection.

The suit contrasted with the red dress with a fitted waist and short bell sleeves she wore to answer a few questions for a “Fox & Friends” morning segment that the President led. She also was caught on camera with first daughter Ivanka in the Oval Office when the President signed legislation leading NASA to enhance STEM opportunities for girls and women.

In recent weeks, the First Lady has taken on a more public role on the world’s stage. With her chief of staff Lindsay Reynolds and social secretary “Rickie” Niceta Lloyd officially on board in the East Wing, and special adviser Stephanie Winston Wolkoff always at the ready, Trump is well equipped for any acts of diplomacy, social settings or photo-ops. On Oscar Night while guests at the Dolby Theatre were counting down the minutes until they would be sprung loose for the Governors Ball, the First Lady was back on the East Coast hosting a very different Governors Ball. The black-tie affair for the National Governors Association trumpeted a “spring revival” theme. In keeping with the dress code, the First Lady selected a sleeveless black number and Ivanka Trump opted for a strapless black column dress from J. Mendel. Melania Trump has made a point of wearing an assortment of American designers including Calvin Klein, Michael Kors, Ralph Lauren, Alice Roi and Norisol Ferrari.

Ivanka Trump has been trying to do her part, too. While the Beltway newcomer has faced a firestorm of heat from critics despite publicly severing ties with her New York clothing company, she has been stalwart about wearing New York-based labels for first family photo ops.

As for the men at the speech, they all played it safe — the President, Vice President Mike Pence and Speaker of the House Paul Ryan all went for navy suits with white shirts and ties in various shades of blue.