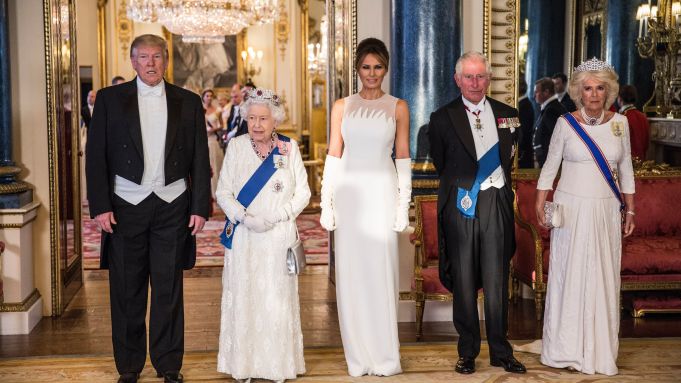 PALATIAL WHITE NIGHTS: Less than three hours after arriving back at Winfield House, the Trumps were off again for their third major London excursion. The first couple started the evening by taking part in a presentation of guests with Her Majesty Queen Elizabeth II before joining in a royal procession. Those formalities were followed by a white-tie state banquet and reception at Buckingham Palace.

The President’s son Barron stayed Stateside, but there were plenty of other Trump offspring for the royal family to meet. The President’s adult children — Ivanka Trump, Donald Trump Jr., Eric Trump and Tiffany Trump — made the trip and were among the 170 guests seated at the horseshoe-shaped table in the palace’s ballroom adorned with displays of peonies. Part of the official U.S. delegation, Ivanka Trump made an appearance with Jared Kushner at Westminster Abbey earlier in the day. Trump’s older daughter is expected to have a seat at Tuesday’s business roundtable and bilateral meeting with outgoing British Prime Minister Theresa May at 10 Downing Street, according to CNN.

FLOTUS selected an ivory-colored sleeveless Dior haute couture dress with a flame-shaped neckline, walking into the dinner with Prince Charles, according to a pool report. The made-to-order dress was polished up with gloves and Manolo Blahnik shoes, both in ivory suede. As was the case earlier in the day for the royal guard review and private lunch with the queen, the First Lady wore her hair in an updo, but with shimmering diamond earrings in her hair to accent the diminutive diamond ones in her ears.

Read More: FLOTUS Flies Burberry Flag as She Touches Down in Britain

The Duchess of Cambridge wore a white ruffled dress from Alexander McQueen’s Sarah Burton. In one of the gala’s more interesting pairings — and no doubt there were numerous ones — she was photographed walking into the ballroom with Treasury Secretary Steve Mnuchin. The former Kate Middleton wore a Lover’s Knot tiara and the Royal Family Order of Queen Elizabeth II and the Dame Grand Cross of the Royal Victorian Order. She sported earrings borrowed from the queen.

White and ivory appeared to be the color of the day Monday, with the queen wearing a gown with crystal-centered daisies by Angela Kelly. Princess Anne (seated beside Kushner) was in white and the Duchess of Cornwall chose a crème-colored embroidered evening gown by Bruce Oldfield with a diamond boucheron tiara, pearl and rose topaz choker and diamond earrings. The queen’s attire was jazzed up with serious wattage — a Burmese ruby and diamond tiara, ruby and diamond necklace, rings and earrings, a white gold and platinum watch, family orders, Queen Victoria’s bar brooch, The Garter sash, a Garden Star and cameo, according to a pool report.

Earlier in the day the First Lady wore a white crepe custom Dolce & Gabbana dress with a navy border and a coordinating hat designed by her stylist Hervé Pierre for the initial meeting with the queen. The Duchess of Cornwall also doubled up on the white ensembles, wearing an all-white Anna Valentine outfit with a hat by Philip Treacy in the daytime. Ivanka Trump was on board with that approach, too, turning up in a white, belted jacket, pleated skirt and hat for the appearance at Westminster Abbey, and a Carolina Herrera embellished evening gown with buttons for tonight’s dinner. May, though, appeared to be in a darker mood, wearing a sleeveless black dress with a plunging neckline.

Eric Trump’s wife Lara, who is expecting their second child, was also in the crowd, wearing a white and black strapless gown from Monique Lhuillier accessorized with white evening gloves. Tiffany Trump also opted for white gloves with her off-the-shoulder burgundy gown.

The Trumps have another action-packed schedule in place for Tuesday starting with hosting a breakfast for leading British and American business leaders at St. James’s Palace followed by the aforementioned trip to 10 Downing Street and a joint press conference. The First Couple’s hosting duties will resume with a dinner a Winfield House in Regent’s Park, the home of the U.S. ambassador to the Court of St. James’s.