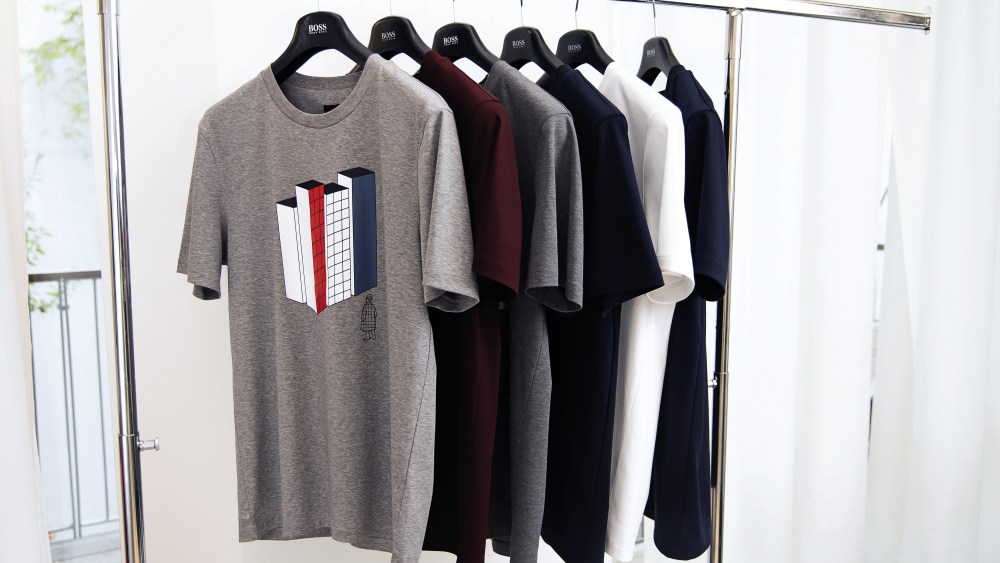 Hugo Boss has collaborated with Konstantin Grcic, one of Germany’s most influential industrial designers, on a limited capsule collection for fall 2019.

Grcic’s award-winning work in seating and lighting is featured in the permanent collections of the world’s leading museums, including MoMA in New York and the Centre Georges Pompidou in Paris; in 2010, he was named designer of the year at Design Miami. Over his almost three-decades-long career, Grcic is perhaps best known for his focus on utility and simplicity — high fashion seems rather a long way from his usual remit.

But not at all, Grcic told WWD as he showed off his Boss capsule collection in his airy Berlin studio, a converted factory floor with large windows and long white desks. “Beauty has a function, too,” he explained. “And if things are only practical, and not appealing, then you have a very different relationship to those objects.

“I don’t want to stretch the metaphor too far but chairs come close to something that we almost wear,” he added. Grcic’s chairs have won design prizes and several feature in museum collections. “So it’s not a completely strange world to me.”

This isn’t his first tie-up with a fashion brand either: In the past, Grcic has worked with major names such as Prada and Brioni, as well as lesser known ones, such as Aeance, based in Munich, for which he helped design a nine-piece collection using recycled, natural or biodegradable materials.

The Boss capsule collection features three T-shirts (retailing for around $118) and two jackets, one of them formal (retailing at $895 and $1,095, respectively). It arose out of a longstanding relationship Grcic has with the brand, the designer explained. In the past, Boss sponsored his 2014 solo exhibition at the Vitra Design Museum in Weil am Rhein, and more recently, the company asked Grcic to help with branding its sponsored entry in the Vendée Globe around-the-world endurance yacht race.

Boss sees collaborations of all kinds as an “enrichment” and a way to expand horizons, said the company’s chief brand officer, Ingo Wilts. “This is especially true for projects with brands or experts from different industries.”

For the capsule collection, Grcic was given the theme of travel, also a topic for the main Boss line. He created three different graphics for the T-shirts; they show a cartoon character — “an old man, wise but slightly confused,” he noted, smiling — in Shanghai, Milan and New York. The two jackets were designed with the help of the Boss team.

Grcic said he learned a lot from running prototypes through a small factory on site at Boss’ Metzingen headquarters. “And this was definitely a learning process for me,” he explained. “Hugo Boss have a lot of experience, they have the knowledge and craft. I definitely couldn’t just storm in and say, ‘Listen to me.’”

That didn’t stop him from suggesting a few things the Hugo Boss design team seemed wary of at first, the designer recalled, laughing. For example, he wanted to remove the second button from the more formal jacket. “I don’t think they liked that,” he said. “For them, a one-button jacket is a very different thing. But they kind of coughed, and then eventually they did it.”

The resulting garments are somewhat deceiving. From a distance, they look comparatively plain but a closer view reveals a top pocket that is unusually elongated, all the way to the side seam, and cuffs that are buttonless. Look even closer, and the insides of both jackets feature semi-transparent pockets — “so you can see what you’re carrying,” Grcic explained — as well as bold structural binding that crisscrosses the interior.

Grcic said he counts early Helmut Lang and Martin Margiela among his favorite fashion designers because of the considered ways they worked with fabric. “I’m intrigued by the subtle intonations, not the grand gestures,” he said. “So the challenge for me was to do a lot, by doing very little. My role was not to create some glamorous, crazy outfit but to adapt and improve details. That’s how we ended up with a fairly normal jacket with some slight interventions. It was all about finding the balance.”

The Boss x Konstantin Grcic capsule collection will be available in selected stores and online in September.