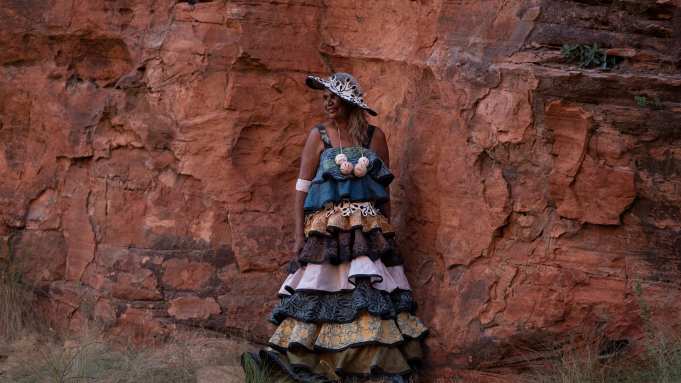 SYDNEY — Australia’s Indigenous fashion sector is percolating and Grace Lillian Lee wants to help take it to the next level.

On Wednesday evening, the Cairns-based Indigenous artist, designer and event producer will present a multibrand Indigenous runway show called “From Country to Couture” to open the 13th annual Darwin Aboriginal Art Fair at the Darwin Convention Centre, in the Northern Territory, before formally launching her First Nations Fashion and Design talent incubator on Friday via an industry booth at the event proper.

Supported by an Arts Queensland grant, Melbourne’s RMIT University and the University of Technology Sydney, “First Nations Fashion and Design” aims to provide a national mentorship platform and business development advice for Aboriginal and Torres Strait Islander artists and designers, most of whom live remotely.

The Darwin Aboriginal Art Fair and Lee, an RMIT fashion graduate, are picking up where the short-lived Australian Indigenous Fashion Week left off in 2014, before it collapsed under debts of $343,000 following its inaugural showcase that year in Sydney.

Lee was herself one of the designers mentored for that event and has gone on to produce her own runway shows at the Cairns Indigenous Art Fair and last year’s DAAF. This is the fourth year DAAF has included a fashion show on its program.

“It [Australian Indigenous Fashion Week] was a really good platform to start the conversation and get people connected,” said Lee. “And I guess I’m emulating that in terms of I’d like to bring that knowledge to the communities, so that they can be mentored and then further develop their own practice within the space.”

There is a lot happening in this space. A second runway show on Wednesday’s program will showcase a collection from Melbourne designer Lisa Gorman designed in collaboration with the Mangkaja Arts Centre in Fitzroy Crossing in Western Australia.

Other initiatives include Design Within Country, which links artists within the Fitzroy Crossing community and Melbourne city creatives.

During the spring 2020 shows in October, textile artists from the Bábbarra Women’s Centre in the Northern Territory will exhibit their artworks at the Australian Embassy in Paris.

The Australian Fashion Council is also working to help facilitate discussions about how to best assist the sector.

On Monday in Darwin, Lee will meet with indigenous artists, representatives of the Darwin Aboriginal Art Fair Foundation, which organizes DAAF, and the AFC for the first of a series of indigenous-focussed AFC roundtables.

“We’re really trying to get an understanding of, across the country, what are the needs, roadblocks and opportunities,” said AFC chief executive officer David Giles-Kaye.