First Night Out at Cannes

Lacking a leading lady, the opening ceremony for the Cannes International Film Festival Wednesday night, with the 3D animated comedy "Up." 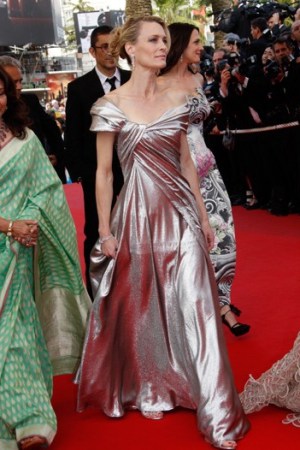 Lacking a leading lady, the opening ceremony for the Cannes International Film Festival Wednesday night, with the 3D animated comedy “Up,” proved a bit of a downer in terms of fashion action, with few high-wattage celebs in attendance.

Most of the star power emanated from the event’s jury, namely Robin Wright Penn, who sashayed up the red steps in an off-the-shoulder silver Elie Saab dress and Louis Vuitton jewels; Shu Qi, who opted for a deep green Roberto Cavalli bustier gown in iridescent chiffon, and Asia Argento, whose Armani Privé pagoda-style bustier dress – decorated with a striking Coromandel-inspired floral print and inlaid motifs – stood out from the crowd. As did the statuesque Tilda Swinton, who faced the flashbulbs on the arm of Haider Ackermann, the talent behind her outfit: a bias cut silk skirt, blouse and suede jacket in a rich bordeaux shade that contrasted with her platinum crop.

The actress is in town with The World Cinema Foundation to screen some restored film classics. “I’m very excited about seeing a 3D film,” she enthused of the night’s “Up”, before slipping into the auditorium. Addressing the audience, jury president Isabelle Huppert twinkled in a champagne-hued Armani Privé, accessorized with a pair of diamond cuffs by Chopard.

Later at Chopard’s Belle de Nuit party at the Hôtel du Cap Eden Roc for the launch of the jewelry house’s Cascade scent, actress Elsa Pataky got to wear the house’s Red Carpet Cascade diamond earrings, inspired by the shape of the scent’s bottle. Caroline Gruosi-Scheufele led the way on the dance floor as guests boogied to a local band. Taking in the sea breeze on the balcony, model Devon Aoki – who said she’s working on an album with her brother Steve Aoki – demonstrated techniques for strengthening the vocal chords. “This one’s excellent,” she said, daintily blowing a raspberry. The pint-sized model also disclosed she’s working on an organic restaurant project in L.A.

Before hitting the decks, French actress Emma de Caunes, clad in little black Azzedine Alaia frock, disclosed she’s been cast to play Kiki de Montparnasse in a Man Ray biopic, due to start filming this fall. “She was a strong figure in the Twenties, an artists’ muse,” enthused de Caunes. Giovanni Ribisi will play Man Ray, while Christina Ricci is also said to have signed up for the project.

Sipping pink champagne, fledgling Italian actress Alessia Piovani chatted about her role in the upcoming musical “Nine,” which stars the likes of Nicole Kidman, Marion Cotillard and Penelope Cruz. “I play an actress who comes for an audition with Daniel Day-Lewis’ character (Guido Contini). Working with him was pretty huge,” she said.

Rising star Alden Ehrenreich and Roman Coppola, wearing battered Vans, slipped in after midnight. Coppola said he’ll be working on the production of his sister Sofia Coppola’s next movie, to be filmed in L.A. Ehrenreich, who plays “Bennie” in Francis Ford Coppola’s buzz drama “Tetro”, which opens the film festival’s Directors’ Fortnight section, lauded working with one of cinema’s mightiest godfathers. “During rehearsals, (Coppola) threw a costume party where we had to wear something that our character would wear and remain in character. It was an extraordinary experience,” he said.