Marion Cotillard, who is the face of the Lady Dior handbag, said she's next shooting a minimovie for the brand. 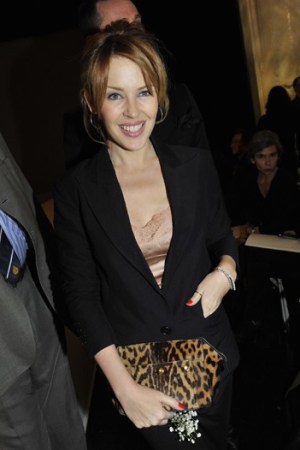 TO THE NINES: Clutching a teeny sprig of white flowers, courtesy of her date, George V hotel’s florist extraordinaire Jeff Leatham, Kylie Minogue sparked a flashbulb frenzy at the Jean Paul Gaultier show Wednesday. The petite singer, in town for a cover shoot for British Elle, disclosed she’ll soon be jetting off to India. “I’m going to be doing a musical number in a Bollywood film,” she said. Ines de la Fressange’s 14-year-old daughter, budding actress Nine, came with her little sister Violette to support her mother, who was walking in the show. “The last time I saw her walking I must have been six. She’s very excited but a bit nervous,” Nine said, twisting her row of pearls. Preparing to take to the stage himself later that night, composer Goran Bregovic said he’d be performing tracks from his latest album, “Alcohol,” at Paris’ Grand Rex venue. “Jean Paul will be coming: It’s a soundtrack for drinking,” he deadpanned. Dasha Zhukova, the glamorous girlfriend of Russian oligarch Roman Abramovich, was decked out in Rodarte and said she would feature works from François Pinault’s collection in the modern art center she founded last year in Moscow. Next up: Zhukova’s planning to show the Christian Louboutin collaboration with David Lynch, dubbed “Fetish.” Lou Doillon said she’s done a shoot with sister Charlotte Gainsbourg by Annie Leibovitz for American Vogue while another sister, 12-year-old Lily, accompanied her to Gaultier. “There were shrieks when I asked her if she wanted to come,” Doillon recounted. “And I thought what a lucky man. They [kids] don’t know who Michael Jackson is but they know Jean Paul Gaultier.”

This story first appeared in the January 29, 2009 issue of WWD. Subscribe Today.

FIT TO BE TIED: After enjoying a “nice break,” Emily Blunt, who joined actresses Olga Kurylenko and Michelle Yeoh at Valentino’s show Wednesday night, said she’s deciding on a handful of movies. “I’m ready to go back to work,” she declared. The British actress, of “The Devil Wears Prada” fame, next hits the silver screen in “The Wolf Man” alongside Benicio Del Toro and also in “The Young Victoria,” where she plays the English monarch herself. “I was winched in,” she said of the restrictive costumes. Applause greeted the arrival of Valentino Garavani, and he was the first to leap to his feet to applaud the couture debut of the Roman house’s longtime accessories duo, Maria Grazia Chiuri and Pier Paolo Piccioli. “I have to tell you, they did a very good job. It is a collection that is perfect for this very moment,” he said backstage afterward. “It was quite emotional to see all my clothes, done by these people who loved me for 12 years, and they are really sensational. They were always staying with me during my fittings of haute couture.”

COMEBACK KID: After six seasons of presenting his collections away from Bryant Park, Narciso Rodriguez is joining a crop of designers who are returning to the tents this season during New York Fashion Week. His show will take place at the venue’s larger tent Feb.17. “Narciso has always had an open invitation to come back to Bryant Park, and his return continues to reinforce that the tents provide the most complete, centralized platform for American designers,” said Fern Mallis, senior vice president of IMG Fashion, which produces Mercedes-Benz Fashion Week.

MAKE WAY FOR WILLIAMSON: Matthew Williamson will be the face — alongside Daria Werbowy — of the campaign for his upcoming collection for Hennes & Mauritz. In the campaign, shot in Tulum, Mexico, Williamson models pieces from his men’s wear collection. The campaign, shot by Solve Sundsbo, will break in May, although no titles have been confirmed. The H&M campaign marks Williamson’s modeling debut, according to his business partner Joseph Velosa, and the designer will appear in the H&M TV ads as well. Williamson’s men’s and women’s collections for H&M bow in April.

PICTURE THIS: No runway show for Franck Sorbier this season. Instead, he used a film of vignettes inspired by the names of Paris streets to present his couture. The whimsical black-and-white clip channeled Surrealism and Man Ray to represent an equally playful collection that included a bustier with a working sconce and a dress decorated with spoons and forks. Clearly Sorbier, who also showed his familiar peplum tops and a nice columnar red gown, lives in his own charming universe.

BETSEY BACK IN TIME: Since celebrating her 30th anniversary last year, Betsey Johnson has been itching to kick it old school with a vintage collection. And in keeping with her credo as one of fashion’s original and perennial cool kids, Johnson’s chosen to partner with Humberto Leon and Carol Lim of Opening Ceremony, for Betsey Johnson Archive. The 35-piece capsule collection of styles plucked from Johnson’s past — reissues, not redesigns — includes pieces from her Paraphernalia and Alley Cat collections, and will launch for fall in Opening Ceremony’s New York and Los Angeles stores, select Betsey Johnson stores and other retailers.

TOWER PLAY: Marion Cotillard, who is the face of the Lady Dior handbag, said she’s next shooting a minimovie for the brand. “I might be going back to the Eiffel Tower,” the Oscar winning actress said at the Dior couture show Monday. For her new Crazy Horse show next week, Dita Von Teese’s outfits will include Elie Saab, some Dior, lots of Christian Louboutin shoes, Stephen Jones hats and a corset designed by Mr. Pearl. “If I can get out of that seamlessly, I can do anything,” laughed Von Teese. French model Estelle Lefébure-Essebag, formerly Hallyday, meanwhile, is introducing a knitwear line and will present it during the ready-to-wear shows in March. “It’s a luxury line with a rock ‘n’ roll touch,” she said. Actress Michelle Yeoh, in town with her writer goddaughter Dee Poon, said she’s working on a documentary on road safety out in April, while her movie “Far North,” already out in the U.K., arrives in French cinemas later this month. Model-turned-actress Bojana Panic, the face of Schwarzkopf, said she has another beauty contract, for a French brand, in the works.

LA LIGNE DOO-RI: When Doo-Ri Chung revealed she was launching a lower-priced collection last month, she knew what she wanted the line to be, but was still deciding on a name. In the end, she chose to call her new baby Under.Ligne. “The name was chosen for its literal play on words but also for the utilitarian and graphic qualities,” Chung said. The designer will fete the new collection with an event at Pure Space in the Starrett-Lehigh building.

ALPHA MALE: Men’s wear will be making more of a mark on London Fashion Week come February. The British Fashion Council said Tuesday it has extended its show schedule by one day to add a program of 13 designers’ men’s shows February 25, the first day of Milan Fashion Week. MAN, a group show that over the past eight London Fashion Week seasons has spotlighted both new designers under the Fashion East umbrella and shown the Topman Design collection, will open the day with a show at the BFC tents at the Natural History Museum. The MAN show will be followed by installations, runway shows and presentations from designers including Carolyn Massey, E.Tautz — a line from tailors Norton & Sons — and the Savile Row retailer b Store’s own label line. The schedule has been curated by Lulu Kennedy, the founder of the Fashion East program. to showcase new London designers, together with Topman.

RAINBOW CONNECTION: There was no off-color behavior permitted at the J.Mendel store Tuesday night when Gilles Mendel and Ivanka Trump toasted “Life in Color,” the latest book from stylist duo Joe Lupo and Jesse Garza. Joan Rivers, Amy Fine Collins and Carmen Dell’Orefice were on hand at the Madison Avenue boutique to fete the tome, which features an updated take on the wardrobe color wheels made popular in the Seventies. (Women are broken into four palette types, with New Age titles like “sun” and “earth” assigned to each.) As co-host, Trump offered her thoughts on the subject, reporting that as far as her closet is concerned, she avoids basic black and instead relies on pink as her go-to hue. “It’s unusual for a city girl, I know,” said the jewelry designer, who practiced what she preached by selecting a mauve J.Mendel number for the occasion.

CLUB TROPICANA: Brazilian designer and illustrator Vanessa da Silva has teamed up with Topshop to produce a capsule collection to launch April 6. The range is a spin-off from Da Silva’s own-label spring collection “Dream Lands,” which features an explosion of hand-drawn illustrations of Brazilian tropical plants and wildlife. Prices for the Topshop collection start at 25 pounds, or $35, for T-shirts and run to 50 pounds, or $71, for dresses. The collection will be sold via Topshop’s Web site and at its Oxford Circus flagship store. And the Topshop line isn’t Da Silva’s first fashion collaboration — she’s previously created prints for designers including Basso & Brooke and Eley Kishimoto.

BYE BYE BANANA: One of Banana Republic’s oldest stores closed Tuesday — and American Apparel is moving in. The unit, situated at 205 Bleecker Street in New York’s Greenwich Village, opened in 1985, back when the chain was still selling adventure and safari-themed clothes. It was among the couple dozen stores Gap Inc. first opened for Banana Republic, after it acquired the brand from founders Mel and Patricia Ziegler in 1983. The hand over of the bi-level space to American Apparel is somewhat emblematic of the fading fortunes of Gap Inc. and the fast recent growth of its more youthful, hipper competitor. “This is a very special intersection in New York City,” said Dov Charney, chief executive of American Apparel. “The triangular shape of the building has a unique architectural quality and the retail history of the space is something that we’re incredibly excited to be a part of.” American Apparel plans to put up a display honoring the original Banana Republic brand and its safari roots. The new unit will open in mid-February, and will be American Apparel’s 21st store in New York City. Globally the Los Angeles-based company operates about 260 stores.

TURNING JAPANESE: New Yorkers who missed out on Japan Fashion Week last September got a second chance to see the spring collections on Tuesday night when 13 designers, down from over 40, presented an encore showcase to a packed house at the Altman Building. Standouts included Hokuto Katsui and Nao Yagi’s techy streetwear for Mintdesign, Hidenobu Yasui’s mannish tailoring and Hiroyuki Horihata and Makiko Sekiguchi’s romantic take on traditional Japanese garb for Matohu. “We’re doing this to drum up interest with buyers to go to Tokyo in March for the [fall 2009] shows,” said Masahiko Miyake, director of Japan Fashion Week Organization and chairman of Sanei-International Corp., through a translator. He added that a second initiative, the Shinmai Creator’s Project, will allow for five up-and-coming designers, including Manhattan’s own Nima Taherzadeh, to exhibit during the next JFW. And that’s not all: The evening’s 13 labels were also getting their own retail displays in New York this week. Participating stores include Opening Ceremony, Destination N.Y., Theory, Aloha Rag, 45rpm and Tribeca Issey Miyake.