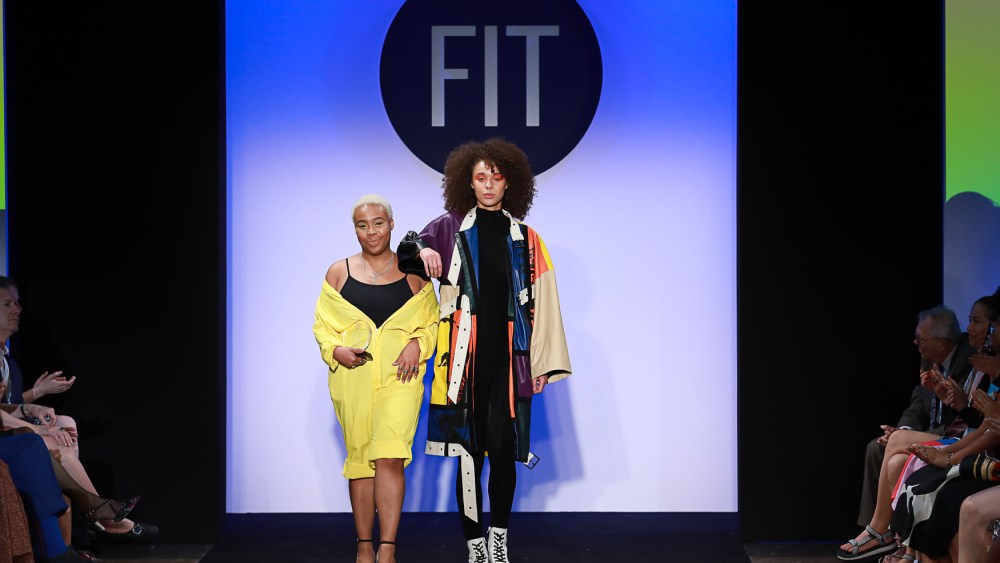 “The Future of Fashion” went into overdrive Thursday night as graduating seniors from the Fashion Institute of Technology took to the runway to present 77 looks selected by industry media and retail judges.

Fabric mixing, hand-loomed sweaters, embellished jacquard skirts, ruffled accents, feathers and embroidery, handbeading and Swarovski embellishments were a few of the details on display. As usual, the child models stole the show as they strutted down the runway in a multicolor wool handknit sweater, a blue beaded raincoat, leather bomber with a denim appliqued airplane, and a dress with beading and leggings.

Sasko, a Swedish design student won a Critic Award for her gray handknit Lovikka jacket with contrasting cabled sleeve and embellished jacquard skirt. She said her prints were inspired by sports, while Kaitlin Barton, who won a Critic Award for intimate apparel, said she was inspired by her grandmother, who instilled a love of lingerie in her. “She would tell me, ‘You need to have the correct underpinnings to have the correct exterior,'” said Barton.

Barton said she loves lingerie, works for a lingerie stylist, interns in lingerie and goes to school for lingerie. She won the award for her purple wildflower embroidery on nude net triangle bra, garter and panty.

Barton came to New York from Indiana on her 16th birthday, and set her mind on studying intimate apparel at FIT. “There are only 18 slots in the program so it’s supercompetitive,” she said.

Stacy Isaacs, who was mentored by Zac Posen, won the Critic Award for her multicolored, screen-printed leather jacket with belt closures over a black catsuit. She said she doesn’t have a job yet after graduation and plans “to take a break.”

Posen said about Isaac’s leather jacket, “I thought the colors were beautiful. It was graphic and read well.”

Overall, he said about the presentation, “The amount of experimenting is so refreshing to see. The colors — and the sophistication of bright colors and the texture play.” He said some of these students should consider applying for “Project Runway” but they’d really have to work at a much faster pace.

Neiman Marcus’ Downing said, “I love the lingerie. It’s always my favorite but the kids’ clothes stole the show.” He called the intimate apparel “so superlative,” citing both the taste level and the execution.

“The children’s is really creative. I was just charmed. The clothes are really spectacular this year. The knitwear program is very impressive,” he said. He said each year, the presentations get “better and better and better.

“Whoever’s looking to hire should look at this class,” said Downing.

Azrouël said, “I thought it was great, very fun. The clothes are very playful and I love the colors and the diversity of the pieces.” As a self-taught designer, Azrouël said he enjoyed seeing the whole process as the students designed, created and produced their own looks.

“I think it gets better and better every year,” agreed Basso. “Their vision is wider and more realistic. Fantasy is one thing, but we want to see how things translate to people. The exceptional area was evening and lingerie.”

Laura Pomerantz said she was impressed with the overall runway presentation. “The gowns were beautiful and the lingerie was fabulous. I asked myself, ‘Are we at a Victoria’s Secret fashion show?’”