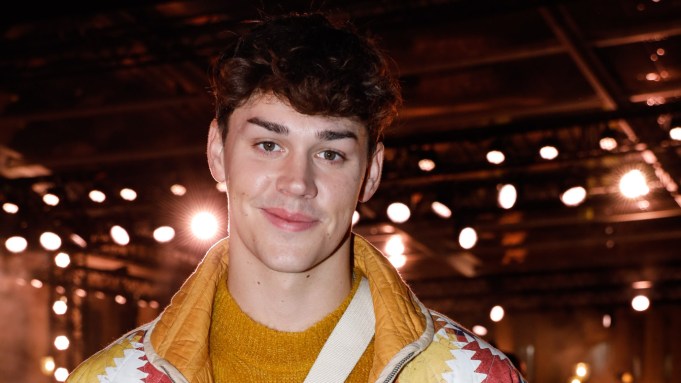 PARIS — He’s one of TikTok’s biggest names, so perhaps it’s best to introduce Noah Beck by the numbers. It’s been a meteoric rise since his first post in January 2020 to becoming one of the platform’s standout stars, with 30.6 million followers. He boasts another 8.3 million on Instagram.

Though he’s best known for short lip-syncing videos and is shirtless in many of his most popular clips, Beck is sitting in some of the most coveted front rows this season. After attending Balmain’s 10th-anniversary blowout on Wednesday, and Isabel Marant’s Palais Royal show on Thursday, he plans to hit up Valentino on Friday.

While Beck says he’s new to the fashion world, he’s already got some pretty serious sartorial street cred. Beck was invited by Louis Vuitton as a virtual VIP guest to view Virgil Abloh’s collection in January, which he reviewed for Vogue.

WWD caught up with Beck at the Marant show to discuss his style pointers, and how he became a style star on social media.

WWD: It seems you are making the most of Paris Fashion Week.

Noah Beck: I’m just starting to get into fashion and I love it, every bit of it.

WWD: What made you start paying attention to fashion?

N.B.: A little over a few months ago, it’s when I just started posting outfits of the day on TikTok and then I realized that people liked that and then brands started reaching out like, “Hey, we see that Noah’s starting to take fashion more seriously.” And I was, like, “Maybe I am.” And then next thing was next, and now I’m here, and it’s amazing.

WWD: Were you just a sweatpants and soccer shorts kind of guy before?

N.B.: I’ve always had a love in a way; I’ve always known how to dress, and it’s kind of funny because that exact style is how my friends used to dress. And I would always kinda pop out in something a little more showy or I would match, where like my friends wouldn’t, and they’d just put a jersey and some jeans together and call it a fit. I always had an idea of what I liked and my kind of style and now I’ve really really built an identity for myself in fashion, and it’s been amazing.

WWD: What would you say that identity is? Very colorful, like your outfit today?

N.B.: I like to lean more toward black, very sleek classic looks and the European style look. I love that look, but today was kind of to show that I could be versatile. I would never usually wear something like this, but I’m trying new things.

WWD: What do you think of the way that TikTok has blown up in the fashion world?

N.B.: It’s amazing. Obviously I wouldn’t be where I am if it wasn’t for TikTok, and I think that people are finally starting to realize the power and the push that it has on people, the market and now, obviously, in fashion, and it’s amazing to see.

WWD: Is this your first fashion week?

N.B.: This is my second. I was just at New York Fashion Week, but [it’s the] first [in] Paris. It’s amazing. I love it. I had a little warm-up in New York, and coming here, things are a bit more open than when I came here last time, and everything feels exactly like I expected it to feel in terms of everyone just looking the best that they can look, and everyone being so nice and welcoming and just building relationships with people. It’s like a big network and it’s so fun to be here.

WWD: Who are your favorite designers?

N.B.: Isabel Marant, obviously, because I’m here. I was just at the Balmain show last night, obviously, it was an amazing, amazing show. Ami Paris, nothing but love for them, I love them. I’m going to Valentino tomorrow. So a lot of huge, huge things. I’m in love with clothes and style. No matter who it is, I love a good piece.