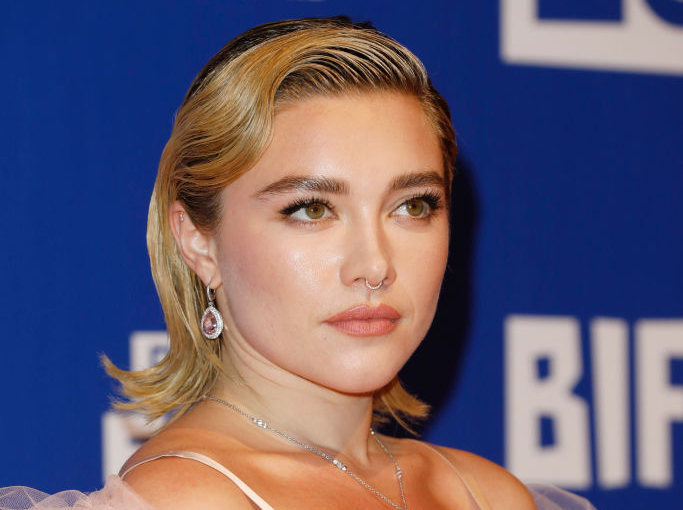 Florence Pugh made a striking arrival to the 2022 British International Film Awards in London on Sunday.

The look by Rodarte featured a nightgown-style blush pink dress and a matching tulle cape. The top of Pugh’s dainty slip was made out of floral-embroidered lace, had a thigh-high side slit with lace trim and a rose in the center. The voluminous tulle cape had dramatic ruffles on the shoulders as well as the train.

To complement her outfit, she wore a pair of gold Aquazzura sandals. Pugh was donned in Tiffany & Co. jewelry for the evening, wearing a pair of oval-shaped drop earrings and a pendant necklace.

For makeup, the actress opted for a glowy look, wearing bright pink blush and matte pink lip. Her hair was slicked back and had a slight curl at the ends and a signature swoop side curl.

Also in attendance at the awards show were other A-list stars, including Letitia Wright, Jenna Coleman and Daisy-Edgar Jones. Pugh was nominated for “Best Lead Performance” for her leading role in the film “The Wonder,” released on Netflix in November.

While on “Late Night With Seth Myers” in November, she wore a floral-embellished gown from Lorenzo Serafini’s resort 2023 collection. For the premiere of “The Wonder” at the BFI London Film Festival in October, she wore a Valentino fall 2022 couture collection gown that featured a feather trim. However, her most viral fashion look was at Valentino’s couture show in Rome in July, where Pugh wore a Barbiecore-pink sheer tulle gown.