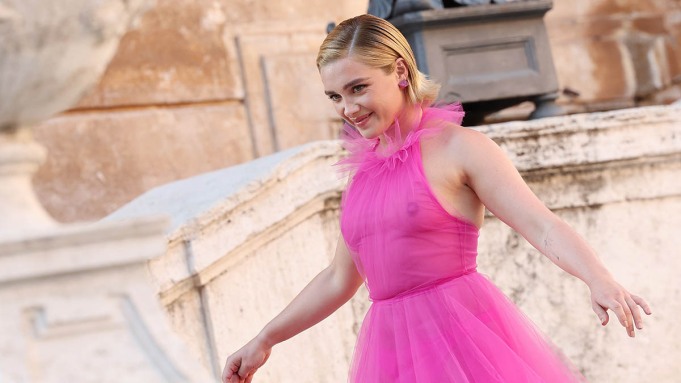 Florence Pugh is addressing the criticism of her Valentino dress.

Last week, the actress wore a magenta halterneck tulle ballgown by the Italian luxury fashion house to its couture show in Rome. The look featured a flowing skirt and sheer top that bared her chest.

When photos of Pugh from the show emerged online, it garnered some comments on social media that the dress was too revealing.

On Sunday, Pugh posted three pictures of herself wearing the dress on her Instagram account along with a lengthy caption addressing the criticism.

“Listen, I knew when I wore that incredible Valentino dress that there was no way there wouldn’t be a commentary on it,” she wrote. “Whether it be negative or positive, we all knew what we were doing. I was excited to wear it, not a wink of me was nervous. I wasn’t before, during or even now after.”

She continued, “What’s been interesting to watch and witness is just how easy it is for men to totally destroy a woman’s body, publicly, proudly, for everyone to see. You even do it with your job titles and work emails in your bio..?”

She then goes on to say that women have been criticized for their bodies, particularly by strange men, but she’s “come to terms with the intricacies of [her] body that make [her, her.]”

Pugh writes that she received comments about why people were so flabbergasted by her chest and why they were so “scared” of breasts.

“I wore that dress because I know. If being loudly abusive towards women publicly in 2022 is so easy for you, then the answer is that it is you who doesn’t know,” she concluded in her statement. “Grow up. Respect people. Respect bodies. Respect all women. Respect humans. Life will get a whole lot easier, I promise.”

Pugh’s caption was praised by many, including Valentino’s own creative director Pierpaolo Piccioli, who commented: “​​Respect❤️.”

Other stars, such as Ariana DeBose, Kate Hudson, Nicola Coughlan, Dan Levy and Aubrey Plaza, among others, also commended the actress for speaking out.