The fashion house’s late founder and his wife, who passed away last year, were honored by the Italian city.

The plaque naming a square after Salvatore and Wanda Ferragamo.

MILAN — “This square is a way for us to express our gratitude,” said Florence mayor Dario Nardella on Friday, unveiling a plaque naming a square after Salvatore and Wanda Ferragamo.

The fashion house’s founder and his late wife, who took over the company after he died in 1960, have been honored for their contribution to the economic and cultural development of Florence, where the business was established in 1927. As reported, Wanda Miletti Ferragamo died last year. Honorary president of the company since 2006, she was instrumental in further developing the company after the death of her husband.

The “Piazzetta Salvatore and Wanda Ferragamo” sits in the heart of the city between Ponte Vecchio, Via dei Bardi and Via Guicciardini, a five-minute walk from Palazzo Pitti and the city’s museum dedicated to fashion and costume.

“We chose a special place for them, a small corner in the heart of the city, a step away from Ponte Vecchio,” said Nardella at the commemoration ceremony. “Salvatore and Wanda’s children told me how their parents enjoyed walking in this area and we are very proud to dedicate this space to two people who worked in Florence with humility, passion, tenacity and foresight, making our city famous around the world,” continued the mayor in the presence of the Ferragamo family, including the company’s chairman Ferruccio Ferragamo, his sister Giovanna and brothers Leonardo and Massimo. 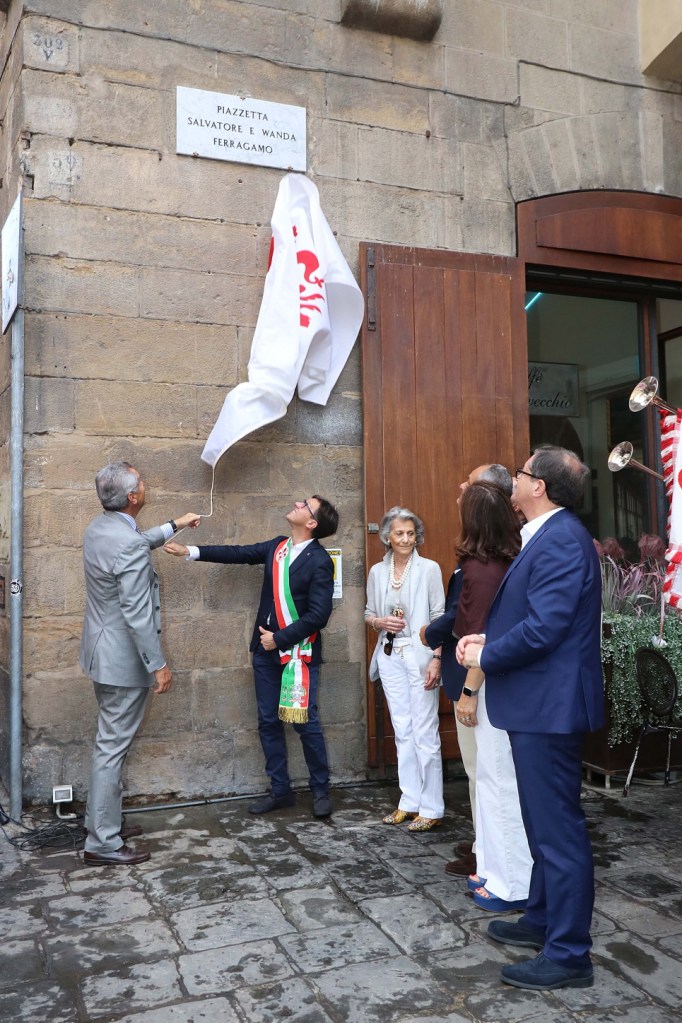 “Florence held an immense appeal for our father, who chose to make it his home for his family and his work,” said Ferruccio Ferragamo. “Our mother was able to carry on where he left off, always reaching new horizons and sharing and exalting his values and the example that he set for her family and workers. These are the people who have supported the development of our business and to whom we express our sincere gratitude.”

At the end of his speech, Nardella also read the letter dedicated to Florence that Wanda Ferragamo wrote back in 2003. The letter was part of the precise instructions the matriarch of the Ferragamo family left for her funerals. As reported, the letter was first read by Ferruccio Ferragamo at a mass held in her memory a month after her death.

“I learned to love you and appreciate you little by little,” she wrote, as she moved to Florence at age 18 from her hometown of Bonito, Italy, when she married Salvatore Ferragamo. She cited Florence’s artistic beauty, its traditional craftsmanship and its hills, its humanism that “influenced and enriched my spirit, giving me a serenity that I channeled in [the company], which my unforgettable Salvatore passed on to me and my children.” She concluded wishing the city could remain “always the precious gem of our beloved Italy.”