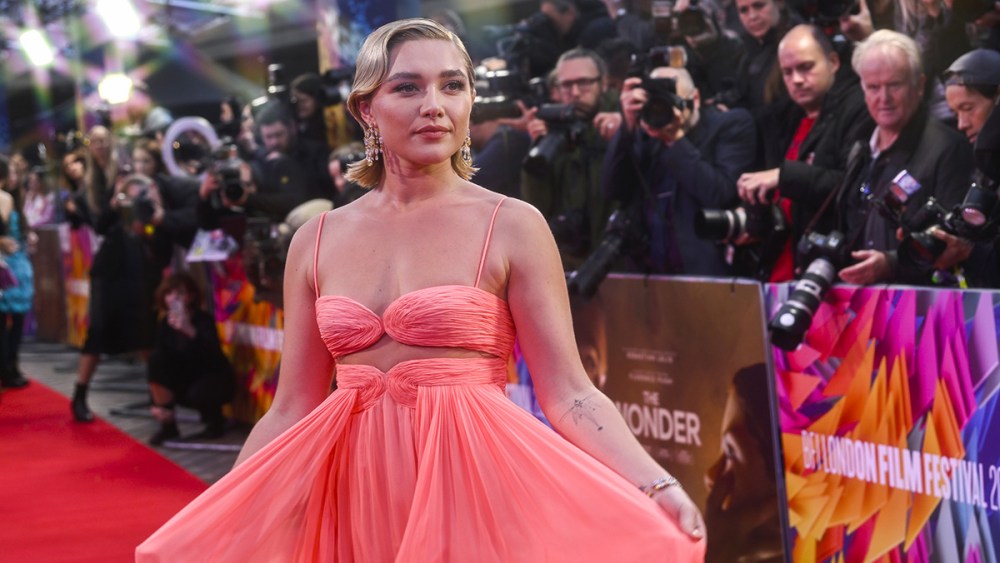 Florence Pugh had a playful moment on the red carpet at the BFI London Film Festival on Friday when she twirled to demonstrate the delicate construction of her feather-trimmed Valentino couture dress.

The actress, who attended the premiere of “The Wonder,” coordinated the coral fall 2022 couture collection gown with a pair of the brand’s lace-up sandals from the resort 2023 collection.

Valentino’s fall 2022 couture collection by creative director Pierpaolo Piccioli was designed in response to what Piccioli described as “today’s ugliness,” from the loss of human rights to the surge of reactionary movements. He said he wanted to create something beautiful and dreamy as a form of escapism. Pugh was among the guests at Valentino’s fall 2022 couture show, too.

The actress worked with hairstylist Peter Lux, who gave her a coiffed single thick wave. For beauty, she worked with Alex Babsky, who gave the actress a classic Hollywood star look with a rose blush, rose lip and smokey eye shadow with eye-popping mascara.

Pugh’s new Netflix film “The Wonder” is based on the 2016 novel of the same name. The film tells the story of a nurse who tends to a girl who hasn’t eaten for months but manages to survive. “The Wonder” debuts on Netflix on Nov. 16.