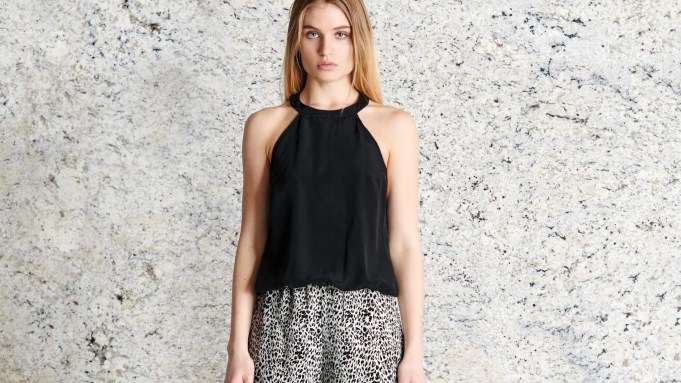 MADE IN MIAMI: Zoey Sage went direct to her consumer base for the launch of her contemporary women’s line Zoey Reva.

The recently launched Florida company, which takes its name from Sage’s grandmother, introduced an 11-piece capsule collection of rompers, bell-sleeve lace tops, dresses and shorts. The collection, all of which is produced in Miami, ranges from $115 shorts on up to a $254 lace romper. Fall is graphic with cut-out detailing on shirts, rompers and pants. There’s also wide-leg jumpsuits and pants cinched with a sash at the waist, along with minidresses and more lace tops.

Sage, whose mother owns a modeling agency in town, started out with ambitions to be a stylist but ultimately decided designing her own clothing collection was the route for her.

Zoey Reva’s core customer base skews relatively young, ranging from 18 to 25. Sage said she went direct first rather than wholesale to test the market.

“We wanted to start with a soft launch online before committing to larger orders since our garments are made in Miami,” she said. “I wanted to keep it here for quality control.”

She plans to eventually build out the wholesale business, looking to position the brand in better department stores and boutiques with the hopes of showing the line early next year at Project and Coterie.

Wholesale could help the business with sales as Sage noted most customers online are willing to take the chance on a new brand, buying most of her tops, particularly a bell-sleeved lace top called Emily, but are less inclined to buy shorts or pants online. Thus, locals have been trying product on at the company’s showroom, another aspect of the business Sage is mulling, although said it’s not a focus in the near-term.

The company’s estimating sales of $300,000 for its fiscal year ending in September 2017, which accounts for only the direct-to-consumer channel and doesn’t include any potential wholesale accounts.