Bottega Veneta threw a party this week to celebrate its first fragrance at The Academy Mansion in New York. 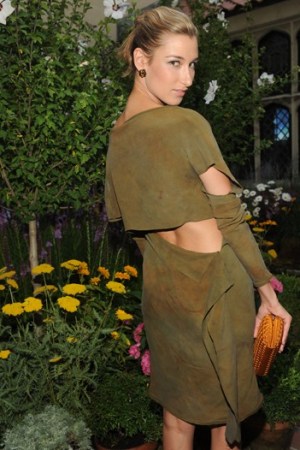 FLOWER POWER: On hot and muggy days, New York City’s homegrown scents are hardly anything to write home about it. This Tuesday, however, Bottega Veneta came to the rescue with a party to celebrate its first fragrance at The Academy Mansion. Raul Avila dressed the mansion’s courtyard with lush flowers, plants, trees and vines, which served to complement spritzes of the new perfume. It found quite a few fans that night. “I want my bed to smell like it,” actress Jessica Chastain said. “I would have the most amazing dreams wrapped in sheets that smell like this.” She joined a group of socials dressed in designs by Bottega Veneta creative director Tomas Maier, including Coco Brandolini d’Adda, Lauren Remington Platt, Kyle Hardin DeWoody and Hannah Bronfman. Cornelia Guest, Simon Doonan, Marina Rust Connor and Beth Rudin DeWoody also made it to the summer soiree. “It’s like being in the countryside,” Maier offered.

HEY SOUL SISTERS: SoulCycle is the latest cardio craze to gain a cultlike following, but its TriBeCa studio drew an especially large crowd on Tuesday evening for the Supermodel Cycle event.

All for a good cause, attendees, predictably mostly male, paid $1,000 to $2,500 a pop to spin alongside Victoria’s Secret Angels Alessandra Ambrosio, Candice Swanepoel, Lily Aldridge, Erin Heatherton and Lindsay Ellingson. Price was determined on proximity to the models, with all proceeds — $100,000 from the ride, plus a $100,000 match from Victoria’s Secret — going to Pelotonia, a cyclist-oriented cancer research nonprofit.

While the throngs were pumped, some of the Angels weren’t so enthused. “I’m kind of nervous. I don’t do much cardio, mostly dancing at concerts,” Aldridge said, presumably referring to her musician-fiancé Caleb Followill, whom she wed in May. For that occasion, Aldridge added, she definitely trained. “It was like getting ready for a marathon, but nothing like getting ready for the Victoria’s Secret fashion show — that’s a whole different level.”

Swanepoel agreed. “It’s crazy. We all kind of lose our minds,” she said. “Like twice a day for the month before the show, I panic because you’re just trying to get it all in up to the last minute. You want to look your absolute best.”

Still, the next Victoria’s Secret runway show isn’t until November, and it clearly seemed to be the last thing on Ambrosio’s mind: “I can’t wait to get some mint chocolate chip ice cream after this.”

The Jones board, which is headed by Sidney Kimmel, founder and chairman of The Jones Group (who is now a film producer), will now consist of 11 members, eight of whom are independent. All three new members will stand for reelection at next year’s annual stockholders’ meeting. Wesley R. Card, ceo of Jones, said: “We look forward to benefiting from our new directors’ contributions as we expand our international presence, develop and build our brands and continue to position Jones for future growth and success.”

SHRED ALERT: Helmut Lang is officially done dealing with his fashion legacy. Having already donated thousands of items from his vast archive to the crème de la crème of fashion and design museums worldwide, the designer-turned-artist has shredded his remaining 6,000 garments to use as raw material for making a series of sculptures. About a dozen stalactitelike pieces are to go on display from July 22 at The Fireplace Project, a gallery in East Hampton, N.Y., in a solo exhibition titled “Make it Hard.” According to writer and creative director Neville Wakefield, who is presenting the exhibition, Lang’s floor-to-ceiling columnar forms — made of scraps of fabrics, fur, feathers, leather, plastic, hair and metal from more than 25 years of fashion collections — erase the past and highlight “the transience of our creative endeavors.” The expo runs through Aug. 8.

FIT FOR A KING: Prince William’s go-to tailor, Kashket & Partners, will soon be suiting up the American market. The brand’s 350-year-old history dates back to selling buttons to the North and the South during the Civil War, but its launch this weekend of men’s and women’s suits is a first for the U.S. The women’s suits will retail for north of $1,500. Their tailored looks will be unveiled Saturday at the Designer Forum Saturday at Flatotel in New York. A copy of the uniform the future king wore to wed Kate Middleton will be on display, as well as samples of the Kashket & Partners-provided page boys’ attire. The husband-and-wife team of Cheryl and Russell Kashket, who serve as vice chairman and chairman respectively, only decided to extend their range beyond bespoke clothes after William said he wanted to publicly recognize their role in the wedding. The label has outfitted his father, Prince Charles, and grandfather, Prince Philip, for 20 to 30 years — not to mention eight kings at the moment and various other royal families.

While the Kashkets’ clientele includes Jude Law and other A-listers, they seem most smitten with the royals. Cheryl Kashket said, “They were just lovely and normal, I would say. And the icing on the cake was when they invited us to the wedding. They felt we should be there to share in the fun for all the work we had done.”

PONY UP: In time for its 40th anniversary, Pony is relaunching footwear and apparel under its archive collection and a Product of New York (P.O.N.Y.) label. Established in New York in 1972, Pony was a major sports brand in the Seventies and Eighties. To help update its image, the company has partnered with accessories designers Dimitrious and Ricky Jackson of Dee & Ricky, the 22-year-old twins who have collaborated with Marc Jacobs and count Takashi Murakami and Kanye West among their fans.