Panelists at a talk organized by the Paris department store discussed the reemergence of flowers in fashion, art and food. 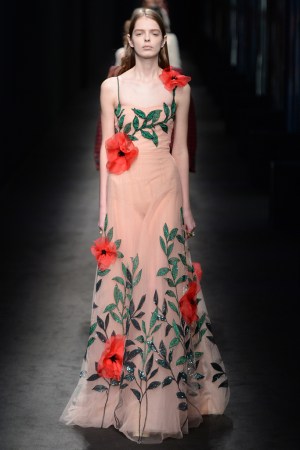 FLOWER POWER: Flowers are all the rage.

That was the consensus among panelists at a talk organized by Le Bon Marché department store in Paris on Thursday night, where everyone pointed to the reemergence of flowers in fashion, art and food after decades dominated by what they called “mineral minimalism.”

The conference coincided with the release of “Flowers, Art and Bouquets,” written by Sixtine Dubly. Carlos Mota penned the foreword, and it was published by Assouline.

“Raf Simons’ work inspired me — his modernity, the way he mixes colors,” said Banchereau, a former headhunter whose shop Debeaulieu has become a regular supplier to fashion houses. His floral arrangements were also recently displayed at the International Festival of Fashion and Photography in Hyères, France.

“Walls were dripping with flowers in his shows for Dior,” Debeaulieu continued.

“Flowers have always had a strong presence in fashion,” explained Dubly.

“Every house has its preferred florist, and every florist, his or her preferred designer — relationships of astonishing loyalty that can last a lifetime,” she wrote in her book, citing Caroline Cnocquaert and Stéphanie Primet, the sisters behind Lachaume who accompany Karl Lagarfeld in his appearances around the world; Baptiste Pitou, of Baptiste Fleurs, who is Pierre Bergé’s supplier, and Eric Chauvin, who did the jaw-dropping hill carpeted with blue delphiniums for Dior in the Louvre’s Cour Carrée.

Designers have also featured floral motifs in their creations — think Paul Poiret’s fascination for Japanese printed textiles, and Coco Chanel, who was enamored with camellias.

“There’s an old-fashioned, charming, 19th-century aspect to flowers, combined with a bohemian touch, which fashion is fond of,” Dubly said at the conference, citing Gucci’s creative director Alessandro Michele, whose creations embroidered with floral motifs reference the refinement of Art Nouveau, Mariano Fortuny and Charles Frederick Worth.

Meanwhile, Fau said flowers have staged a comeback in art, too. For instance, there’s Jeff Koons’ “Poppy,” the 43-feet-tall sculpture of a puppy that’s made of a variety of flowers.

Trochon deplored a use of edible flowers only to ornate dishes, a phenomenon prevalent in haute cuisine. He favors using those bursting with flavor, such as cilantro or arugula flower.