Food for Thought at ‘Saving the Season’ Book Party

The art, fashion and food worlds collided on Tuesday night at Band of Outsiders and Bon Appetit's party for Kevin West's book. 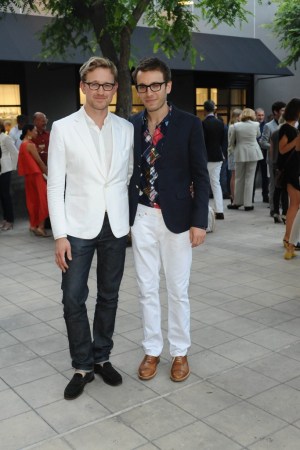 FOOD FOR THOUGHT: The art, fashion and food worlds collided on Tuesday night at Band of Outsiders and Bon Appetit’s book party for Kevin West’s “Saving the Season.” Liz Goldwyn, China Chow, Doug Aitken, Annie Philbin, Bret Easton Ellis, Zoe Cassavetes and Jon Shook were among those gathered at Grand Central Market for the Southern-style soirée. Even though Scott Sternberg’s photo in the magazine’s spread on West ended up getting cut in favor of some pickles, he had no hard feelings toward editor Adam Rapoport. “It’s a food magazine, after all,” Sternberg said. “Actually Katherine Ross thought I was the editor of Gourmet, until I reminded her it doesn’t exist anymore,” said Rapoport.