Though it was very cold, and somewhat early, Peter Som drew an enthusiastic lineup for the front row at his fall show at Milk Studios. 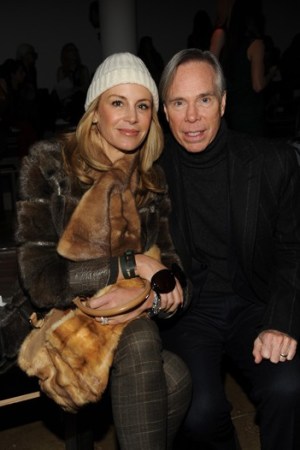 FOR PETER’S SAKE: Though it was very cold, and somewhat early, Peter Som drew an enthusiastic lineup for the front row at his fall show at Milk Studios. A very bundled Dee and Tommy Hilfiger were there for the 10 a.m. show, as was an extremely smiley Julie Macklowe, who darted back and forth over the catwalk greeting friends. Sky Ferreira was on hand, gearing up for the party she’s co-hosting on Sunday night with Nur Kahn for VS Magazine at Kenmare. “I really love his designs.…I’m just really happy I’m here,” the singer said of Som, flipping her large blonde mane for photographers. Amanda Brooks perched near street-style darlings Scott Schuman and Garance Doré, both of whom merrily snapped away at both the runway and the viewers.

NEW PROJECTS: Christian Siriano’s mother, Joye, was enjoying a little bit of the spotlight Thursday night, as she greeted guests before her son’s fashion show. “They love my baby,” she gushed. “He’s [backstage] bossing everybody around.” A former schoolteacher from Annapolis, Md., Siriano was feeling every bit the proud mom. “I taught him how to sew when he was nine,” she said. She recalled the day he won “Project Runway”: She marched into the Board of Education office and told them, “I am done in June.” Since retiring after 40 years as a reading specialist, Siriano has been taking it easy. “I don’t do a damn thing but go on cruises,” said Siriano.

Among those in the front row were Mena Suvari and Gabrielle Union. Suvari, who was dressed head-to-toe in Christian Siriano, said she’s been working on NBC’s “The Cape,” and a new movie, “Shopping for Boys,” with Amy Smart, in which they play best friends looking for love, while Union said she’s been busy introducing a skin care line for women of color for Neutrogena.

Siriano, who designs shoes for Payless, created his own shoes for the show, which will be interpreted by Payless. Hopefully, the commercial product will be easier to walk in. One girl took a tumble in the sky-high heels, several tripped and another took one shoe off during the curtain call.

WORKING GIRLS: Michelle Trachtenberg, seated in the front row at Rebecca Taylor, said she’s working on a capsule collection with Taylor, which will be introduced sometime in the future. Trachtenberg, of “Gossip Girl,” has a new movie coming out in March called “Take Me Home Tonight.” Maggie Rizer, a friend of Taylor’s who was wearing one of her printed dresses, said she got married in September and moved to San Francisco, and has been busy with modeling and catalogue work in the U.S. and London.

CRUELTY FREE, MOSTLY: The focus at Thursday’s PETA Fashion Week Bash at Stella McCartney’s store was not so much what people were wearing, but what they weren’t. Fur topped out as the worst of the sartorial no-no’s at the event, hosted by Olivia Munn and Tim Gunn, who screened his short “Fashion Victims” film for the crowd of animal lovers. The images were graphic, but worked for Taraji P. Henson, on hand to unveil her new “I’d Rather Go Naked” antifur ad at the party: “I saw their documentary ‘I Am an Animal’.…I still have nightmares.”

Todd Oldham arrived with guest Joan Jett, who conceded that going cruelty free is a work in progress.

CASTING CALL: Wilhelmina Models is partnering with Macy’s and Miraclesuit to launch the Wilhelmina 40+ Model Search, a nationwide effort to find women ages 40 and older who are model material. The model search will be hosted by Randall Christensen, Emmy Award-winning costume designer for “Dancing With the Stars,” who also is style adviser for Miraclesuit swimwear. Contestants can register online at wilhelminamodelsearch.com Feb. 28 to May 24. Open casting calls kick off March 12 at the Wilhelmina offices in Manhattan, followed by three Macy’s venues — April 9 in Miami and May 21 in both Chicago and Los Angeles. In addition to Christensen, judges will include talent scouts from Wilhelmina and Miraclesuit.

“It should all be very exciting and lots of fun. We’ll have 10 finalists and end up with a runway show in June. The grand-prize winner will be announced at Macy’s Herald Square,” said Christensen. The winner will receive a modeling contract with Wilhelmina, a photo shoot courtesy of Miraclesuit and a wardrobe makeover by Christensen.

THE INN CROWD: Karl Lagerfeld has put his Gramercy Park apartment up for sale. The designer, who bought the luxury flat in 2005 when he was staging fashion shows for a new signature line in New York, said he scarcely uses the place. These days, when he’s in Manhattan, he prefers the SoHo district and his usual suite at the Mercer hotel.

Meanwhile, the French Riviera is beckoning the designer once more. Having showed his cruise collection for Chanel in Saint-Tropez last spring, Lagerfeld plans to hit nearby Antibes, another mythic resort destination, for a Chanel show on May 9 at the Hotel du Cap-Eden-Roc.

BACK TOGETHER AGAIN: Two former St. John executives have reteamed to create a line of sportswear built around clean and simple knit separates in understated colors. Buchanan & Zavala, named for Soo Buchanan, president and chief executive officer, and Roberto Zavala, head of operations and development, will launch for fall with a 60-piece collection ranging from $125 to $700 at wholesale. Zavala, former head of product and development at St. John, tapped former St. John vice president of design Maria Lopez to create day-to-evening pieces ranging from a sleeveless sheath and a wrap coat to pantsuits and one-shoulder cocktail dresses. Targeted retailers include Nordstrom, Bloomingdale’s and Saks Fifth Avenue as well as specialty boutiques. Industry sources estimate first-year sales at $10 million and Buchanan said future plans include a casual collection and possibly handbags and fragrance.

PORSCHE’S RETAIL RACE: Porsche Design Group, the sister company of Porsche sports cars, has an aggressive agenda to roll out 250 Porsche Design stores by 2015, 12 of which will be in China, said chief executive officer Juergen Gessler. “In 2003, we were just a design studio, and in 2005, we had five stores. Now, we have over 100 stores worldwide. Asia, the Middle East and the U.S. is where we are looking.” The newest opening will be in San Francisco in two weeks and the company is searching for a second store location in New York’s SoHo district. The first New York unit, on Madison Avenue, opened in 2006, followed by Las Vegas in 2009 and Miami last year. In addition to its race car-inspired sportswear and accessories for men, Porsche Designs will launch a line of premium jeans for men and women in September in a joint venture with German denim brand Blessed & Cursed, and plans to introduce a line of women’s active sportswear this year with Adidas, another joint venture. Retail sales in 2010, including sunglasses for men and women, sold at 500 opticians, exceeded 200 million euros, or $272 million, he said.