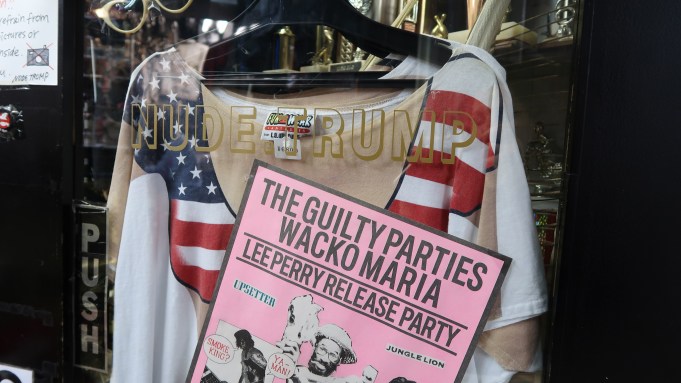 TOKYO — Longtime Shibuya vintage store Nude Trump says its business remains unaffected by the erratic behavior of the American president with whom it shares a name.

The store, located on the third floor of an Eighties-style building, offers a hodgepodge of vintage blouses, go-go dresses, ballet costumes, heavy gold chains, hats and more. It was opened 28 years ago by Tokyo vintage dealing legend Hayao Matsumura, whom some refer to as the “grandfather” of Tokyo mishmash fashion.

The shop’s Trump name was not inspired by the entrepreneur-turned-politician, but rather by playing cards that feature the image of nude pin-up models as decoration. In addition to clothes, accessories and costumes, Nude Trump sells nude trump cards as an expression of its name.

“There has been no change in sales,” a shop attendant relayed to WWD. They noted that about 90 percent of the store’s clientele are Japanese, and thus are not as alarmed by its Trump moniker.

The store is located within something of a DIY Trump complex. Just one flight upstairs is longtime Shibuya nightlife establishment Trump Room. Though the nightclub’s interior boasts many chandeliers and gold leaf embellishments details, it too does not take its name from the president.